What are the best robot movies? Robots in one form or another have been around since the dawn of film. From A.I. to Westworld, they are utterly central to science fiction movies. With filmmakers always thinking our mechanical mates are just around the corner of scientific progress, robots are often a telling and fascinating glimpse into a theoretical near future.

It’s almost impossible to create a list of robots and robot movies without someone shouting: “That’s not a robot! It’s a cyborg/# or replicant or hairdryer!” For the purposes of this list, we’re not getting stuck on semantic differences. It counts as a robot movie if one of the main character’s is an artificial being created and designed rather than born. Or, in one case, a giant made of iron (spoiler alert). They vary between creatures of burden, created to do a job, to fully developed A.I.s with thoughts, feelings, and agendas.

There are robot movies for every age of viewer, from the scary to the cute, and everything in between. Most of the robots in them are beholden to their human owners or controllers, fully leaning into the origin of the word Robot itself – Robota. A Slavic word meaning forced labour. This lends our robotic friends to satire, commentary, and subtext – pointing out flaws in scientific progression or political leanings. Robots are often more than meets the eye (Not so spoiler alert: they didn’t make the list). So, plug in, charge up, and download our list of the best robot movies.

What are the best robot movies? 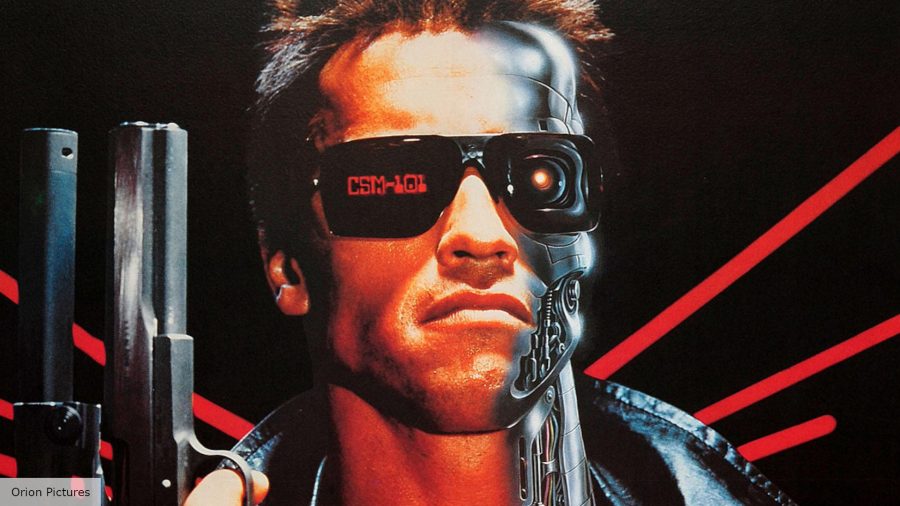 There aren’t that many characters that have gone from a hitman, to bodyguard, to drapery enthusiast, but the T-800 is one of them. The antagonist of James Cameron’s The Terminator was given iconic life by Arnold Schwarzenegger, kickstarting his career and a thriller movie franchise that still has some life in it nearly 40 years later.

I’ll be back: Best action movies

Complemented by Stan Winston’s peerless special effects, despite attempts to create superior foes in later instalments, the prototype of living tissue over a metal endoskeleton has never been matched. The first film in the series skated the line brilliantly between the slasher films of the 1970s and the science fiction of the ’80s. Creating a pared-back simplistic, and grounded sci-fi movie that still packs a punch nearly 40 years later. 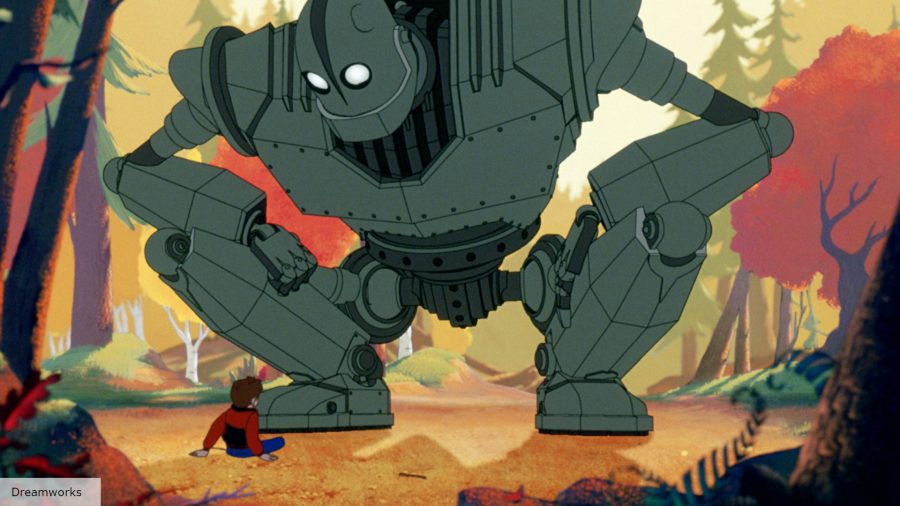 Thanks to some marketing snafu’s, Brad Bird’s The Iron Giant was at the time a bit of a financial flop. Gratefully, as time has gone on, audiences have become more aware and more in love with this animated movie masterpiece. A huge influence on Travis Knight’s Transformers movie Bumblebee (2018), the character design of The Iron Giant manages to make him cute, lovable, and funny.

The voice talents of Vin Diesel acted as a brilliant dress rehearsal for the Marvel Cinematic Universe’s Groot, and it remains one of the best animations ever made. A big-hearted, warm, and charming piece that led the way for the emotional impact of the Pixar movies and Disney movies that followed it. 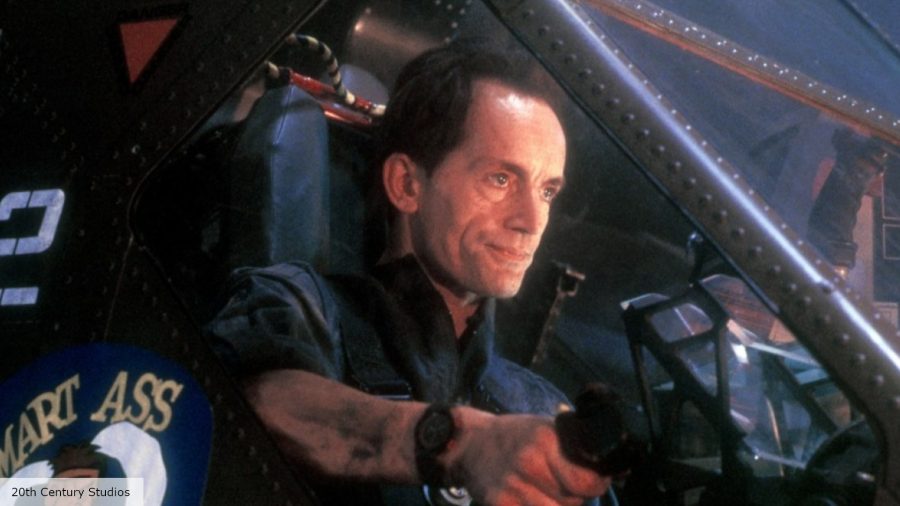 Another James Cameron entry, Bishop (Lance Henriksen), was the second artificial person (he prefers that term) to appear in the Alien timeline. In contrast to Alien’s Ash (Ian Holm), Bishop is an honest, self-sacrificing, and loyal addition to the crew. Ripley’s (Sigourney Weaver) initial reluctance to trust him feels well earned, and his patience with her adds a warmth to their relationship.

The resulting character feels completely deserving of human compassion, making his ending difficult to watch. Aliens is probably the most well-loved of the Alien franchise, thanks in part to the presence of Bishop and the way he earns Ripley’s trust. 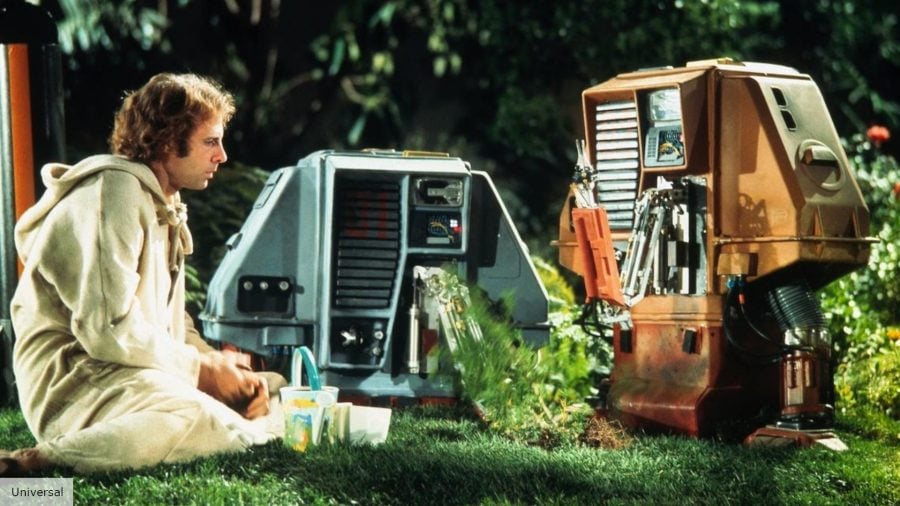 Environmental sci-fi Silent Running flips the idea of the genre as a display of scientific progress on its head. Primarily a survival film, the last remaining human, Lowell (Bruce Dern), has only three service robots for company. He dubs them Huey, Dewey and Louie, and they become witnesses to his slowly declining mental health.

With minimal characterisation, the robots act as a sounding board for Lowell’s actions, endlessly innocent and occasional victims to his whims. With incredible set design and some excellent puppetry (the robots themselves are amputees folded into the tiny suits), Silent Running remains a timeless example of characters with minimal dialogue done well. 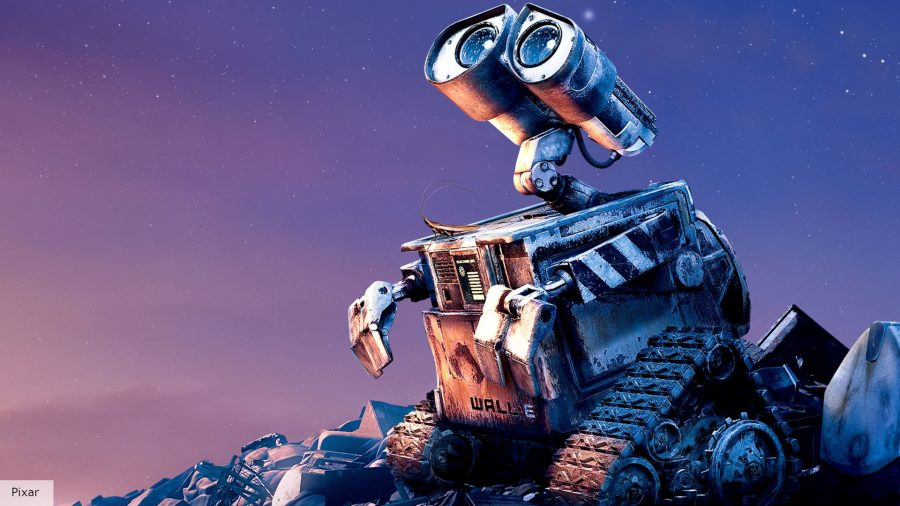 Another environmental sci-fi, the influence of Silent Running on WALL-E, is clear. He is the last service robot tasked with tidying up the earth while humans wait on a five-star space station for generations. The first 45 minutes or so of WALL-E is like a silent film in many ways, as we learn about his existence and excitement at finding new objects.

When EVA, a more modern and much sleeker robot, arrives, WALL-E is in love. Between them, these two robots that no one thinks much of must save a tiny plant, and the human race, before a much more complex intelligence destroys them. Stylistically peerless, WALL-E was Pixar flexing its muscles after the studio’s continued success with the Toy Story franchise, and it set the standard for the company’s work from then on. 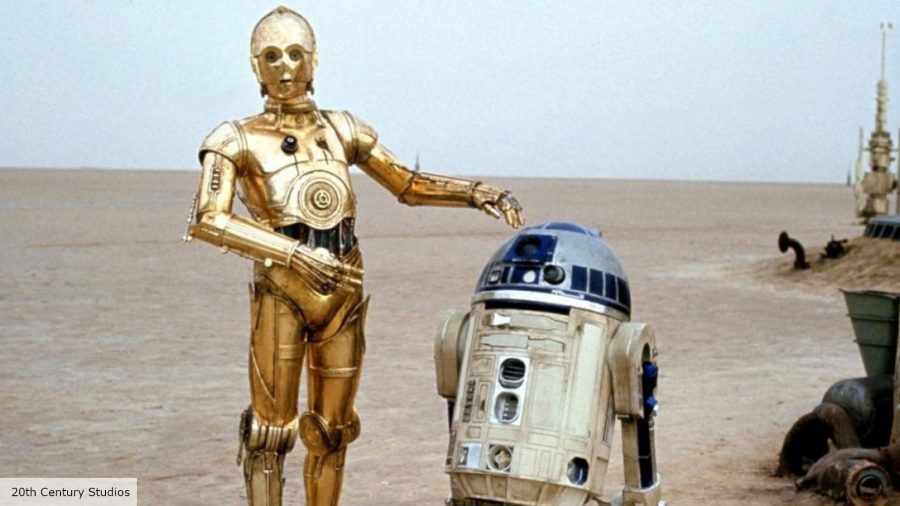 There are many droids from the Star Wars universe who arguably deserve a place on this list. None are higher, however than R2-D2 and C-3PO. A tall, camp golden man and a beeping dustbin. The communication between them is clear, and they provide constant companionship to the characters.

They are the only characters consistent in the entire saga, with R2’s loyalty to the rebellion knowing no bounds. You could have a worse motto than ‘What would R2-D2 do?’ Or perhaps “Would C-3PO think this is a good idea?” 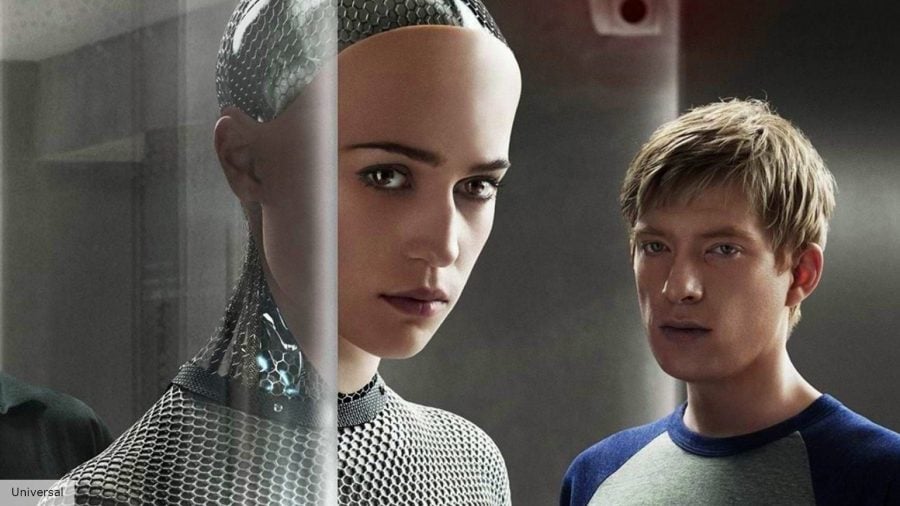 Alex Garland’s robotic examination of Artificial Intelligence and the uncanny is headed by Alicia Vikander’s Ava. Despite her appearance, hairless, transparent, and clearly mechanical, Vikander’s performance pierces through this to give Ava nothing short of a soul.

At no point do you doubt her feelings, her emotions, and her desires, nor her justification for her actions in the final act. Ex Machina is a modern masterpiece, and a stunning examination of the possible consequences of thinking humans can become Gods. 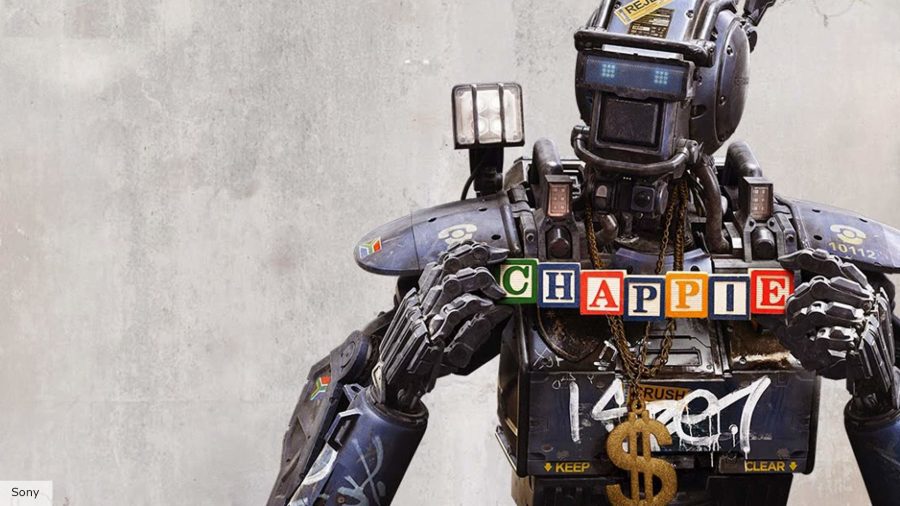 When Chappie (Sharlto Copley) appears in the slums of Johannesburg, he is a completely blank slate. Found by Yolandi and Ninja (Die Antwoord), they recognise him as a decommissioned police robot, and take Chappie under their wing, with varying intentions. Yolandi tries her best to be a mother to him, while Ninja endeavours to turn him into a weapon against the police force, which is bearing down on them.

Comparisons to Short Circuit (1986) overlook the intention behind Neill Blomkamp’s strangely charming but hyper-violent thriller. An observation of how poverty and gang crime escalate when there is no one to support or intervene, and the tragic consequences on the children growing up in that environment. 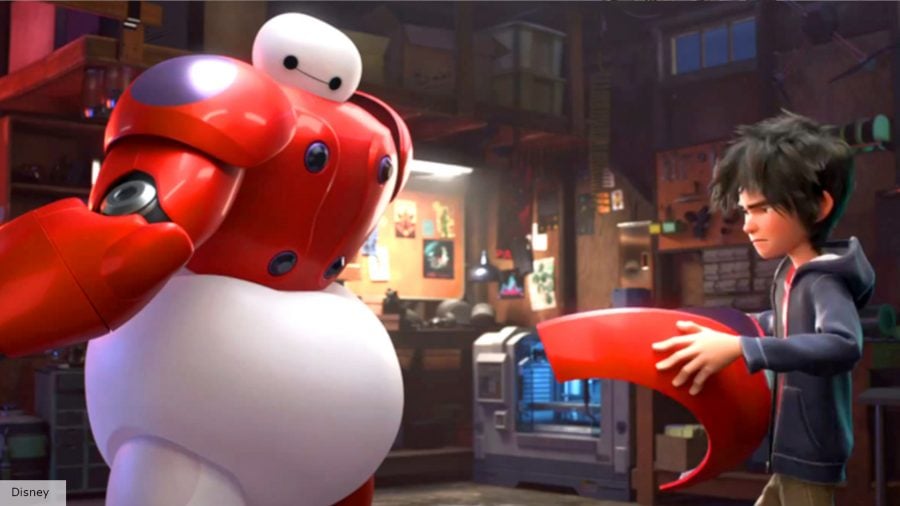 A tragically overlooked recent addition to the Disney canon, Big Hero 6 is an adaptation of a little-known Marvel comic. Only it’s a very loose one. Set in the fictional city of San Fransokyo, Hiro (Ryan Potter) is a boy trying to deal with the tragic death of his older brother, Tadashi (Daniel Henney).

Hiro finds comfort in carrying on the development of his brother’s project, Baymax (Scott Adsit), and using the big marshmallow shaped medic robot to try and find out how his death came about. Endlessly quotable and earnestly adorable, Baymax is possibly the cuddliest robot on film, even in armour. 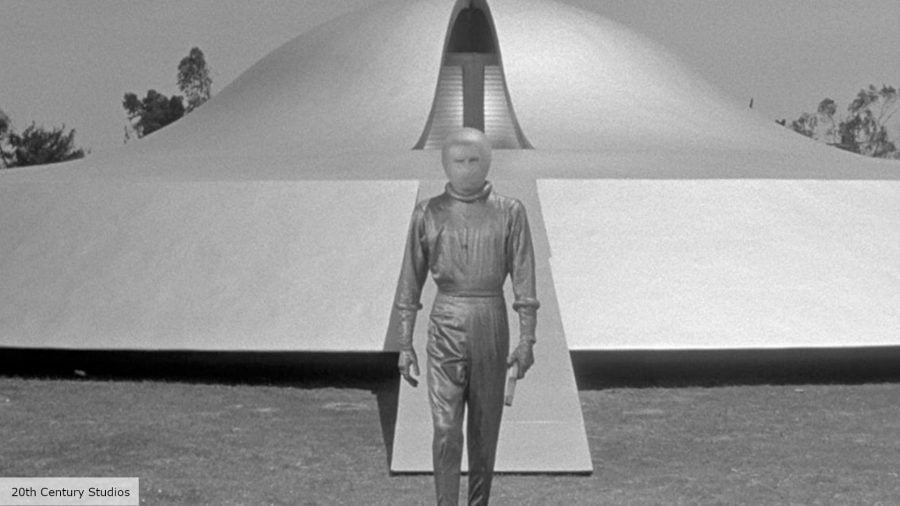 The earliest example on our list, The Day The Earth Stood Still is a classic sci-fi masterpiece. Minimalist in its execution, most of it focuses on a strange man, Mr Carpenter, also known as Klaatu (Michael Rennie), staying with a normal family.

Fear is instilled in those watching by the giant robot weapon he is accompanied by, known as Gort (Lock Martin). A central example of cinema in the atomic age, The Day The Earth Stood Still, emphasises the choices humanity faces every day, to work with technology or be destroyed by 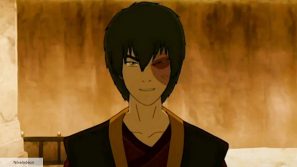