Dwayne Johnson has taken a day off from his usual routine of lifting heavy things, making action movies, and giving fans his truck, to celebrate an incredible achievement. The former wrestler turned adventure movie extraordinaire has claimed that Red Notice has overtaken horror movie Bird Box as the most-watched movie ever on the streaming service Netflix.

Last we heard, Red Notice had been streamed 150 million times, topping Netflix’s publicly available stats, but it seems that the film’s gone from strength to strength. To celebrate this incredible milestone, the Fast and Furious star took to Instagram, where he shared a clip from the film, along with a caption that paid tribute to Ryan Reynolds and the fans who helped Red Notice shatter streaming records and become the biggest film in the history of Netflix.

“Nyet politsiya… Not a COP! Here’s my slick talkin’ frenemy [Ryan Reynolds] and I, giving you a taste of why Red Notice has officially become the biggest movie in the history of Netflix,” he wrote. “In under two weeks, we’ve shattered all records, and we have many weeks to go. Thank you guys, and enjoy Red Notice this weekend around the world.”

Red Notice received middling reviews at best from the majority of critics – the film only garnered 35% on Rotten Tomatoes – who found its plot trite and predictable.

Our own Anthony McGlynn was slightly warmer on the whole thing, writing that he enjoyed the chemistry between the movie’s leads, but was let down by their seeming invulnerability that left the action scenes feeling slightly lifeless.

Still, Red Notice has gone down a lot better with general audiences who’ve awarded it a 92% on Rotten Tomatoes and have been turning out in their millions to stream it.

If you enjoyed Red Notice and are holding out on Netflix greenlighting a sequel check out our guide on the best spy movies. 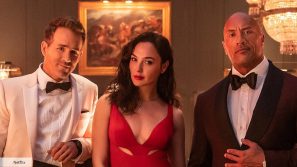 1Evangeline Lilly calls Ant-Man and the Wasp: Quantumania the “best one yet”
2Nicolas Cage is embarrassed he asked his uncle Francis Ford Coppola to put him in The Godfather 3
3Scream 5 ending explained – who is the new Ghostface killer in Scream (2022)?
Latest in Movies
A Christmas Story sequel in the works with Peter Billingsley set to return
Danny DeVito nearly drowned filming Always Sunny in Philadelphia stunt
Nightmare Alley (2022) review - Guillermo del Toro delivers a lavish slice of gothic Americana
The Batman theme unveiled by composer Michael Giacchino
Yellowjackets season 1 ending explained
A