Rawson Marshall Thurber, the director of the hit Netflix action movie Red Notice, says that Red Notice 2 and 3 may be on their way soon, but the films will have a set production schedule if they ever are. In an interview with The Hollywood Reporter, the director shared that if the two sequels to his heist film starring Dwayne Johnson, Ryan Reynolds and Gal Godot got greenlit, they would be shot back-to-back.

Red Notice has currently been taking the streaming service Netflix by storm. After releasing on the platform on November 12, the comedy movie broke Netflix’s record for having the biggest opening day for a flick in the streamer’s history. In his review for the film, our Anthony McGlynn called it “quite exciting” and praised the leading stars. Red Notice also holds an impressive audience score of 92% on Rotten Tomatoes. With all its success in mind, Thurber shared that he felt like a Red Notice sequel is a “real possibility.”

However, the filmmaker was quick to clarify that he’d knock out two films in one go if Netflix decided to officially greenlit the projects. “If we were to make a sequel, the only responsible thing would be to make two and three back-to-back,” Thurber explained. “It’s such a big production, and if you can mount it one time, it will be better for everyone. Including for my mental health.”

If Red Notice 2 and 3 were greenlit, filming them back to back does make sense as all the action series’ stars have packed schedules. Dwayne Johnson is set to make his big DCEU debut as Black Adam in 2022. At the same time, Gal Gadot is currently filming the spy movie Heart of Stone and has several projects already lined up such as Wonder Woman 3, Cleopatra and Disney’s live-action adaptation of Snow White and the Seven Dwarves.

Ryan Reynolds is taking a break from acting, but might be diving into the Marvel Cinematic Universe for Deadpool 3 sometime in the future. Thurber himself has also recently said that his next project is the adaptation of Tom Clancy’s The Division, so needless to say Red Notice fans will have to wait patiently for the cast and crew’s schedules to clear up before any sequels can take place.

Currently, Netflix hasn’t announced any plans for Red Notice 2 and 3. While we wait on updates, you can watch Red Notice on Netflix now. 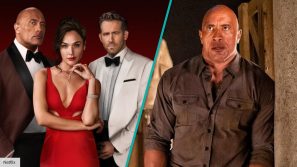