Netflix’s latest action movie Red Notice is reportedly breaking records. According to one of the film’s stars, Ryan Reynolds of Deadpool fame, the film has managed to score the title of having the biggest opening day for a flick in the streaming service’s history.

Taking to Twitter Reynolds shared the big news with followers via a celebratory post while also cracking a joke about the release of Taylor Swift’s re-released album Red. Sharing a picture of himself and his co-stars Gal Gadot and Dwayne Johnson the actor wrote: “Wow, Red Notice is Netflix’s biggest ever opening day for a film. Congrats to this whole team! Can’t wait for Red Notice (Taylor’s Version.)”

The film debuted on the streamer on November 12, and has reportedly been pulling in impressive numbers despite its mixed critical reception. Currently, Red Notice only holds 38% on Rotten Tomatoes. The Digital Fix’s review for the film called it “quite exciting” but also “a bit flat and lifeless”. However, despite critics, the film has managed to garner 92% on its audience score and is comfortably sitting in Netflix’s trending bar in the UK.

Reynolds wasn’t the only star to celebrate the film’s success. Both Johnson and Gadot took to social media to celebrate Red Notice.

Johnson shared a video of himself at the gym while announcing the news to followers. “It’s OFFICIAL as the numbers are coming in from 190 territories around the world,” the star captioned his post. “Red NOTICE has become THE BIGGEST OPENING EVER – for ANY MOVIE IN THE HISTORY OF NETFLIX!”

Red Notice is currently available to watch on Netflix. For more streaming hits here is our list of the best movies on Amazon Prime. 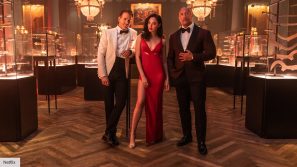 Red Notice 2 and 3 would shoot back-to-back if greenlit, says director
Get involved Continue the conversation over on The Digital Fix Forum