Get your pith hat dusted off and make sure the boat is fuelled because we’re going on another jungle cruise. Yes, Disney has officially announced it’s working on a sequel to Jungle Cruise. The Hollywood Reporter reports that Dwayne Johnson and Emily Blunt are set to return as Skipper Frank and Dr Lily Houghton, as will director Jaume Collet-Serra. Michael Green, who co-wrote the first adventure movie, will also return to write the script.

It’s unsurprising that the higher-ups at Disney have decided to make a Jungle Cruise 2. The family movie has been a monster hit at the box office, raking in $61.8 million worldwide during its opening weekend, no mean feat in a post-Covid 19 world. This weekend the movie crossed the $100 million mark at the US box office (putting its total worldwide takings at $187 million), which seems to have precipitated Disney’s decision to greenlight the film.

Johnson celebrated the sequel with his trademark enthusiasm. “All aboard! Mahalo to our buddy Borys Kit for breaking the big Jungle Cruise sequel news!!!,” He tweeted. “This is going to be FUN! Oh, and cheers to Jungle Cruise just crossing $100M at the domestic box office.”

It’s been a long road to the big screen for Jungle Cruise. Work began on the movie more than 15 years ago, after the success of Pirates of the Caribbean – which is similarly based on a Disneyland ride. Initially, the Toy Story duo Tom Hanks and Tim Allen were attached to star, but it looked like Jungle Cruise had sunk when those plans stalled.

ALL ABOARD 🚢💀🌊
Mahalo to our buddy @Borys_Kit for breaking the big Jungle Cruise sequel news!!!
This is going to be FUN! 🌎
Oh and cheers to Jungle Cruise just crossing $100M at the domestic box office 🍿👊🏾🥃@SevenBucksProd @DisneyStudios #FlynnPics https://t.co/dN0LphpUce

In 2015 though, Johnson came to the film’s rescue, signing on to star and agreeing to co-produce the film under his Seven Bucks Productions. After Johnson was on board, he went out of his way to cast Emily Blunt as his co-star, going so far as to send her a video asking her to join him on this voyage. While the video didn’t convince her, the script which Collet Serra pitched as an Indiana Jones-style action movie did.

Jungle Cruise is in theatres now and is also available on the streaming service Disney Plus through Premier Access. 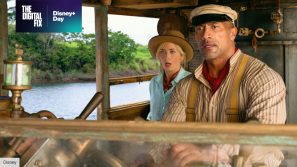