Batman is one of the most famous DCEU superheroes of all time. Everyone knows the story of how he lost his parents as a child on that fateful night in Crime Alley, before vowing to rid Gotham of crime years later as a caped crusader. But aside from his tragic origin, the cool cars, and the fancy gadgets, audiences love Bruce Wayne because he refuses to give up even in the face of defeat.

With no superpowers of his own, Bats is usually up against insurmountable odds – making his fights all the more compelling. Obviously, that huge fortune Bruce has come in handy but he typically relies on his fighting skills and his prowess as the “World’s Greatest Detective”. So it’s no surprise that Warner Bros. has produced a lengthy list of movies starring everyone’s favourite Dark Knight, and Batman’s cinematic adventures have always been huge crowd-pleasing blockbusters.

There’s been a number of different movies based on the hero, each with their own unique vision of what Batman should do. So light up the Bat-Signal, and let’s look at how the hero has evolved over the years in live-action ahead of 2022’s The Batman.

Bruce Wayne might be dark and moody, but the 1966 movie starring Adam West was anything but grim. This camp classic took the light-hearted spirit of the ABC TV series and gave Batman and Robin (Burt Ward) an even bigger adventure.

They face off against the Joker (Cesar Romero), the Penguin (Burgess Meredith), the Riddler (Frank Gorshin) and Catwoman (Lee Meriwether) who all plot to turn the United Nations Security Council into dust, literally. It’s silly and insanely fun. But most importantly, it proved the hero had a place on the big screen. 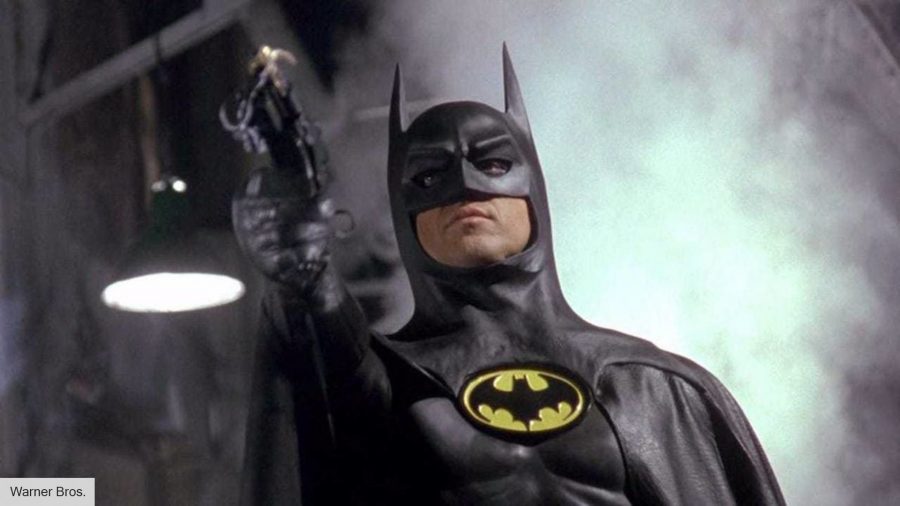 Fast-forward to 1989 and Tim Burton ushered in a gothic vision of what the Dark Knight’s world should look like, with Michael Keaton as Bruce Wayne. This was something of a gamble at the time since Keaton was only known for his comedic roles, but he’s still regarded as one of the best Batmen to ever grace the screen.

The film even gives us an intimidating new take on the Joker from the legendary Jack Nicholson. He likes to taunt his victims with “Have you ever danced with the devil in the pale moonlight?” No, we haven’t, but that’s a brilliant line of dialogue. 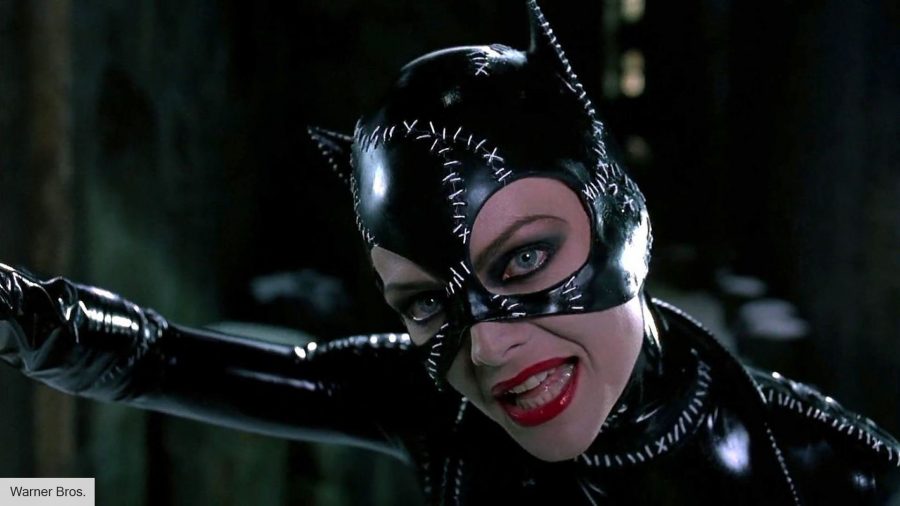 Michael Keaton and director Tim Burton both came back for Batman Returns in 1992. You know how sequels go bigger and better? Well, you can’t get much better than Michelle Pfeiffer as Catwoman and Danny DeVito as the Penguin.

Tim Burton’s gothic-fantasy style explored Gotham City even further when the Penguin’s own tragic origin shows how he was abandoned as a child and grew up in the sewers. Meanwhile, the dynamic between Catwoman and Batman adds a sexier edge to all these costumes. Meeeow! 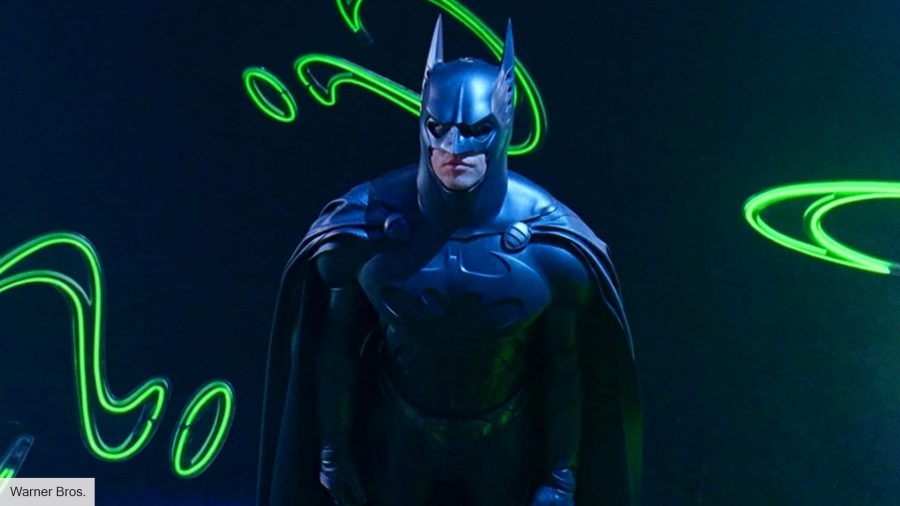 Although Joel Schumacher’s Batman Forever is technically a sequel to the Tim Burton movies, Val Kilmer takes the cape and cowl from Michael Keaton. It also gives us a very 1990s version of Dick Grayson/Robin from Chris O’Donnell.

The dynamic duo contends with a new pair of villains in Jim Carrey’s Riddler and Tommy Lee Jones’s Two-Face. It takes Burton’s dark vision of Gotham City and adds a camp flair to the superheroics. Although we’re still disappointed Billy Dee Williams didn’t get to play Two-Face as he was supposed to… 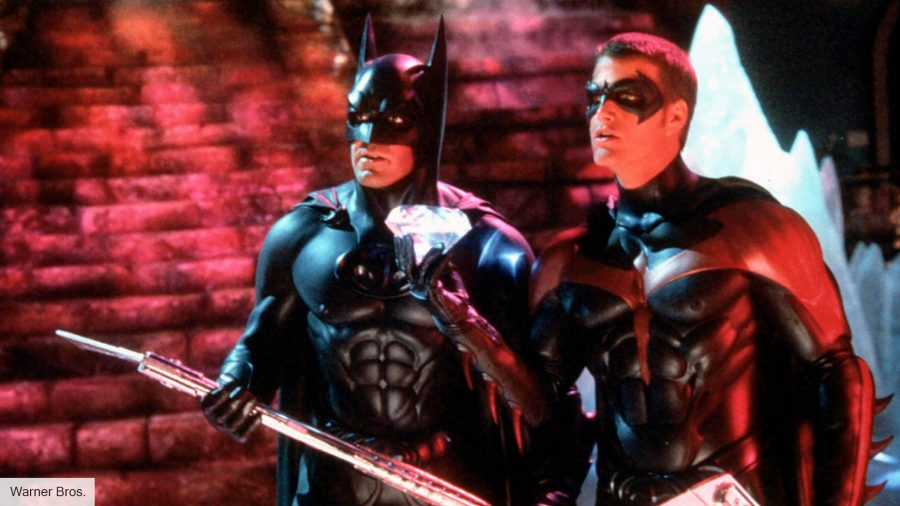 Two years later Joel Schumacher returned with another sequel, this time with George Clooney in the Batsuit, which is complete with Bat-Nipples AND Bat-Credit Card! The camp flair that Batman Forever has gets cranked up a notch here as Arnold Schwarzennegger hurls out numerous icy puns as Mr. Freeze, while Uma Thurman manipulates everybody as the seductive Poison Ivy.

Mr. Freeze wants to turn Gotham into a frozen haven as he researches a cure for his wife’s mysterious illness. There’s heart in the script somewhere, it’s just a shame it’s buried underneath bad jokes and silliness. Yikes. 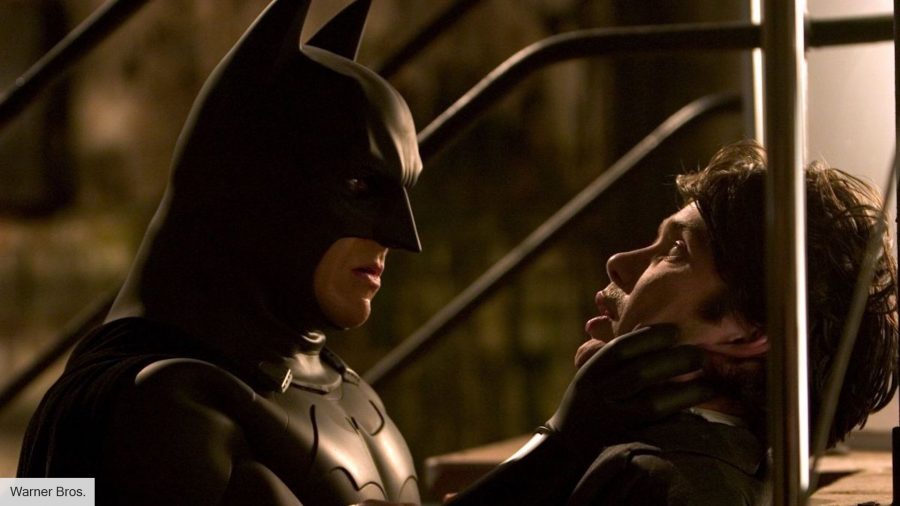 Christopher Nolan took a real-world approach to Gotham City when he and David S. Goyer wrote Batman Begins, and in 2005 the world was introduced to Christian Bale as Bruce Wayne. Nolan built the hero from the ground up, drawing from Frank Miller and David Mazzucchelli’s Year One.

There’s nothing to fear, but fear itself! Best horror movies

Aside from his classic tragic origin story and his League of Shadows training, Batman fights Scarecrow (Cillian Murphy) who aims to dismantle the city using his fear toxin. It’s just another day in Gotham. 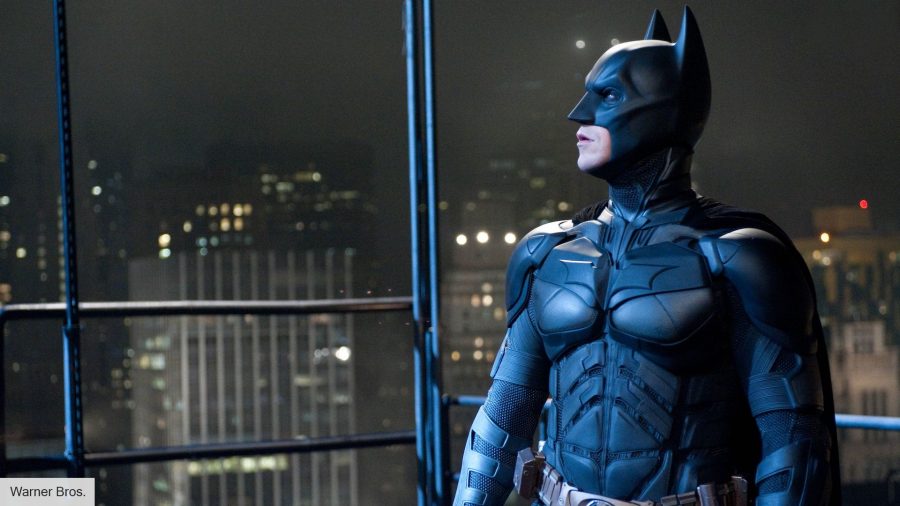 Ah, The Dark Knight. Christopher Nolan’s 2008 sequel is widely regarded as one of the best comic book movies of all time – and for good reason. Heath Ledger’s transformative performance of the Joker is terrifying. He’s a primal force that blasts through Gotham leaving pure carnage in his wake for no rhyme or reason other than to “introduce a little chaos”.

What happens when an immovable object meets an unstoppable force? They battle it out for the city’s soul, of course. Bale and Ledger’s dynamic is exhilarating to watch, and the drama only escalates when hot-shot District Attorney Harvey Dent (Aaron Eckhart) goes through his own trial by fire. It’s unmissable. 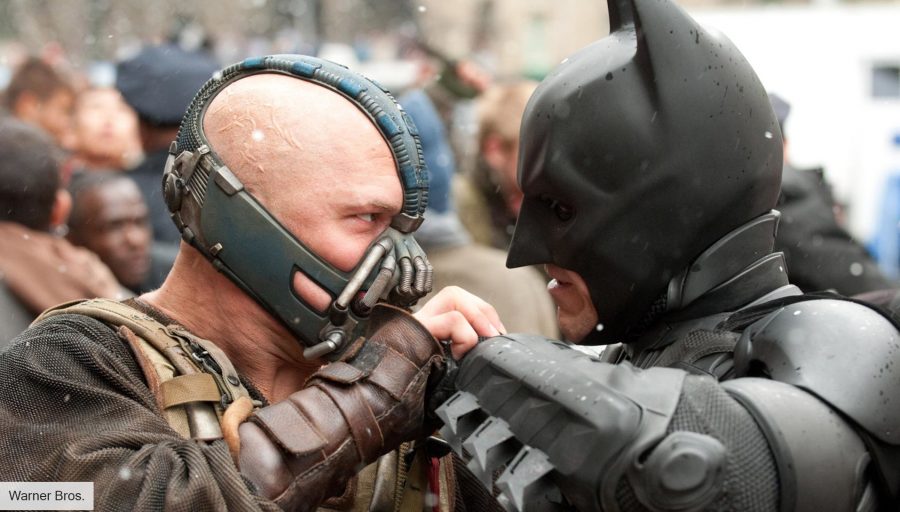 But after two incredible films, Nolan had the difficult job of finishing his trilogy with The Dark Knight Rises, and the director finally does what he’d been threatening to do since 2005 by plunging Gotham into total, utter chaos.

The story is inspired by the “No Man’s Land” storyline originally created by Jordan. B. Gorfinkel, as Bane (Tom Hardy) cuts the city off from the mainland and rules it with an iron fist. It’s a bombastic final outing for Bale’s Batman that feels epic in scale. 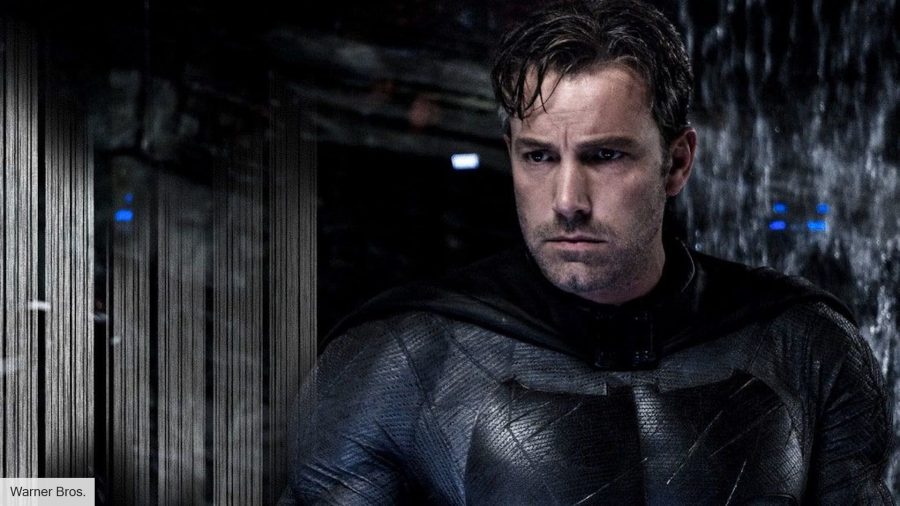 Batman v Superman: Dawn of Justice was Zack Snyder’s second foray into the DC Extended Universe. It saw Ben Affleck’s grizzled, older Bruce Wayne take aim at Superman (Henry Cavill) for all the devastation and death he caused in his fight with Zod (Michael Shannon) at the end of 2013’s Man of Steel.

But what starts as a story about holding heroes accountable for their actions quickly descends into a super-powered punch-up with a Kryptonian monster called Doomsday. Thankfully it also gave us Wonder Woman (Gal Gadot) and her incredible theme, scored by Hans Zimmer. 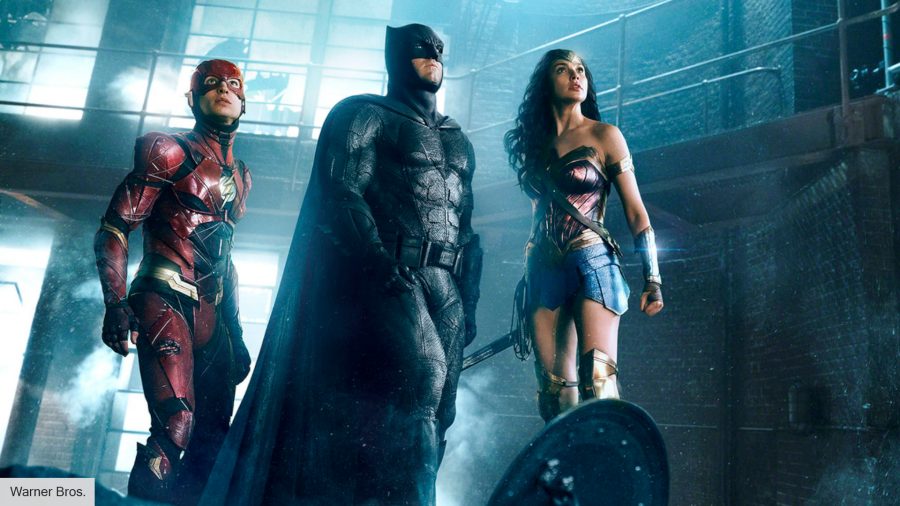 So Batman’s journey in Justice League is a tricky one. In the theatrical cut, he assembles a team of heroes to fight a villain from the planet Apokolips called Steppenwolf. It’s a straightforward blockbuster that clocks in at 2 hours long.

Make Your Own Future: The best science fiction movies

But in Zack Snyder’s Justice League, the hero has more time (nearly four hours, in fact) to ponder on his place in the universe among gods and monsters. The film even delivers a post-‘apokoliptic’ version of Affleck’s Caped Crusader after Earth has fallen to Darkseid. This one’s a matter of preference and how much time you’ve got 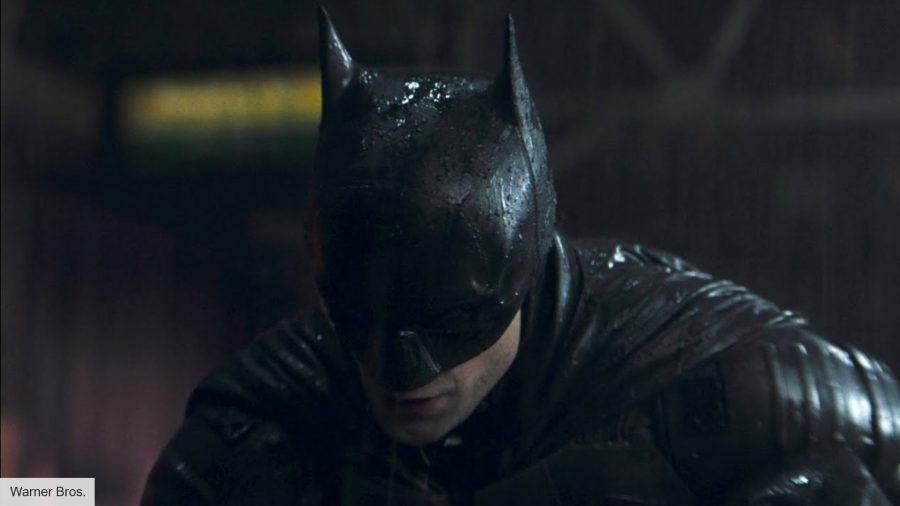 The Batman and beyond…

The next time we see Bruce Wayne on the big screen he’ll be played by Robert Pattinson in Matt Reeves’ The Batman. The director’s noirish take on the mythology will find the hero in his second year of crime-fighting when he has to figure out what sadistic game the Riddler (Paul Dano) is playing.

The first trailer teased a grim and gritty Gotham in the vein of David Fincher’s Seven (or even Zodiac), and it’ll be interesting to see how it all plays out in May 2022. After that, Michael Keaton and Ben Affleck will play their respective Batmen opposite Ezra Miller’s Barry Allen in The Flash, which will treat audiences to DC’s multiverse when it speeds into cinemas in November 2022.

It’s going to be a big year for the Bat. If you want to know more about the Justice League and their escapades, here’s how to watch the Arrowverse in order.