What’s the right order for watching the Arrowverse? Many of DC’s best heroes have become part of The CW’s shared multiverse, being introduced through one of the large-scale crossovers before heading off to lead their own shows. What started with Arrow in 2012 has become seven disparate series, each with a distinct cast, and tone.

Some are finished, some are still going, and altogether, they offer a magnificent, years-long canon of superhero television. Like your heroism with capes aplenty? Prefer things to be more lighthearted? Or maybe you’re the broody type? All of the above? Chances are the Arrowverse has something for you.

But where do you start with over a half-dozen network series that have been interwoven through the better part of a decade? What are the biggest episodes to watch out for, and what order should you watch them in? Reader, you’re in the right place – we’re going to guide you through watching Supergirl, The Flash, Arrow, Black Lightning, Batwoman, Legends of Tomorrow, and Superman and Lois, highlighting the most important episodes along the way.

What’s the best order for watching the Arrowverse? 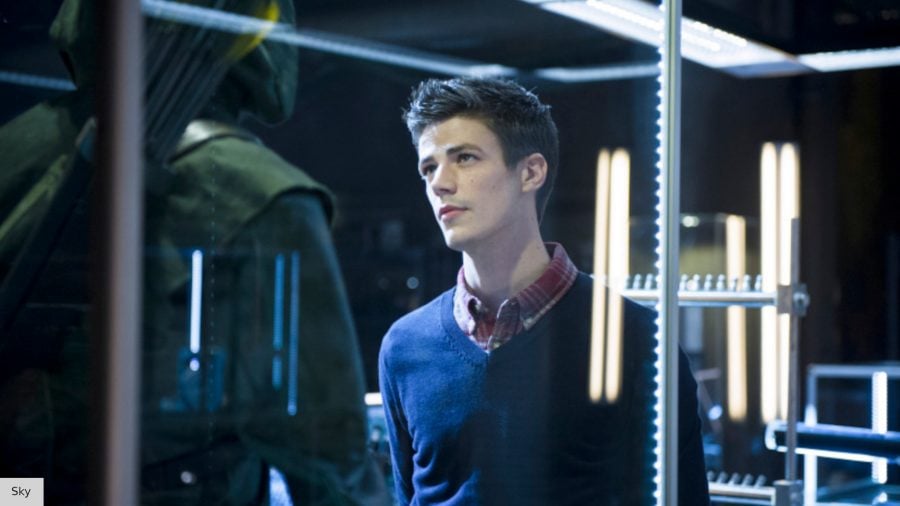 Within its first two seasons, Arrow had proven so popular, The CW decided to start bringing in other DC heroes for Oliver ‘Green Arrow’ Queen (Stephen Amell) to fight. First up was Barry ‘The Flash’ Allen (Grant Gustin), who made his on-screen debut in Arrow season 2, episode 8 ‘The Scientist’ as a Central City investigator helping Oliver catch a superpowered thief.

This carries into the following episode, ‘Three Ghosts’, where Barry gets struck by lightning. He’d be running his own show in The Flash next season, developed by Greg Berlanti and Andrew Kreisberg, two of the same producers behind Arrow, and Geoff Johns. 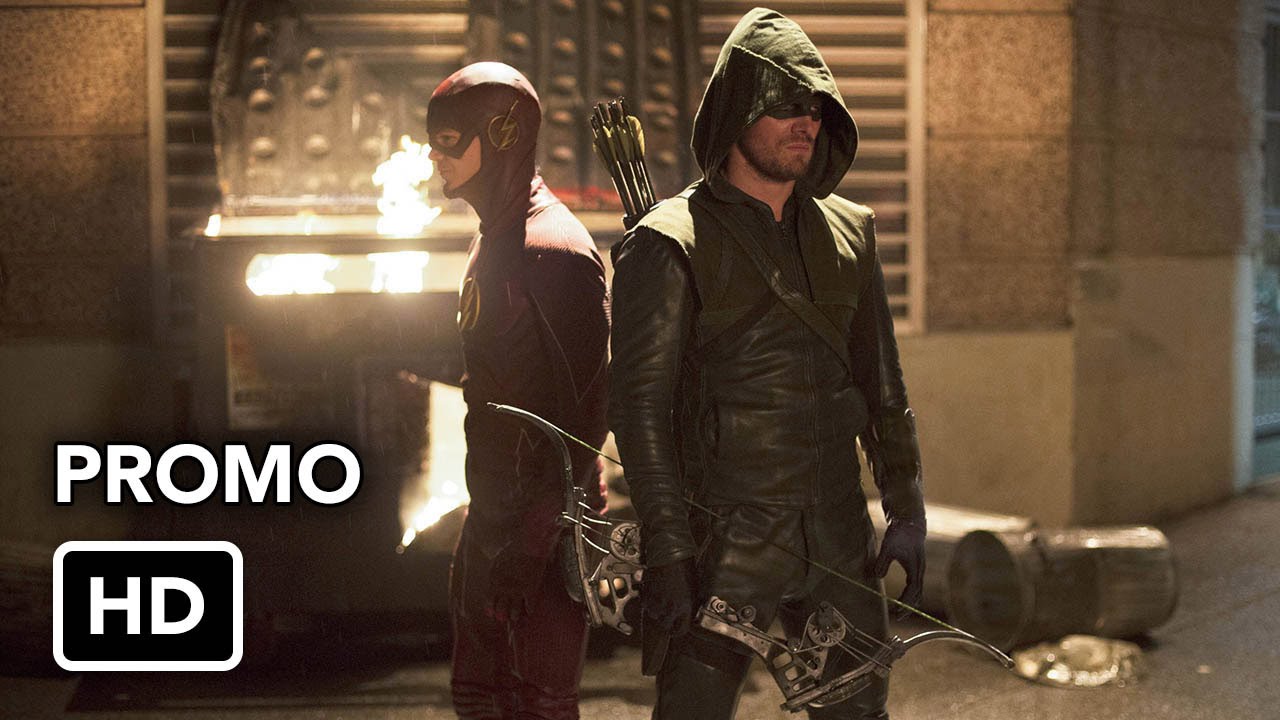 In September 2014, Arrow’s third season premiere was joined by season one of The Flash, and since The CW’s schedule had two vigilantes roaming its streets, naturally we had to see them.

Villain Roy Bivolo is causing a stir in The Flash season 1, episode 8, ‘Flash vs. Arrow’, sending people into violent tantrums with his mind. His spell catches Barry, forcing The Flash and Arrow to square off, but it’s not long before their pals, teaming up for the second part, Arrow season 3, episode 8, ‘The Brave and the Bold’.

A lot of context is placed on this early crossover, and if you want the full effect, watching the preceding seven episodes of the respective seasons helps in that respect. Otherwise, a breezy two-parter that’s only a taste of the kind of large-scale multi-hero action that’d come our way. 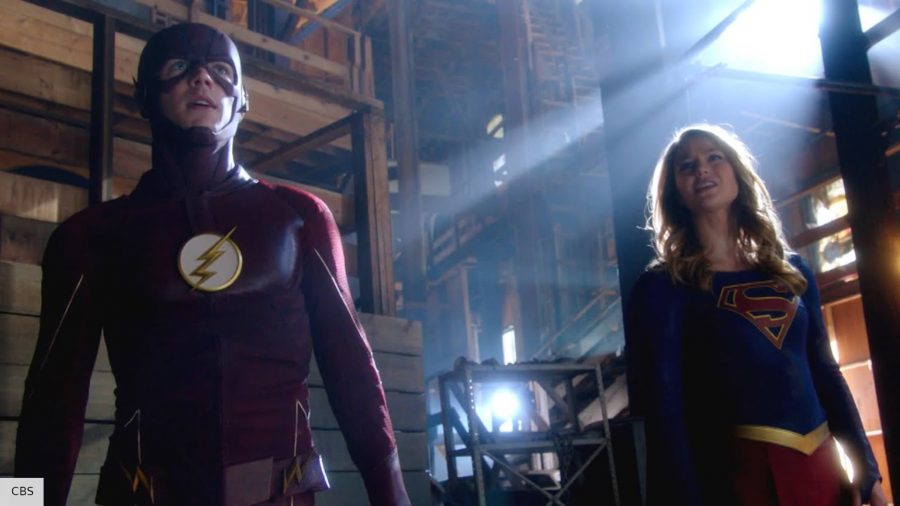 Why only add one show at a time, when you can add two? Although, to be fair, Supergirl began life on CBS, slightly removed from the main Arrowverse, so DC’s Legends of Tomorrow was the only fully planned addition to The CW. A two-part crossover on Arrow and The Flash brought together the Legends of Tomorrow, and Barry shows up late in Supergirl to meet Kara ‘Supergirl’ Danvers (Melissa Benoist) and establish that connective tissue. 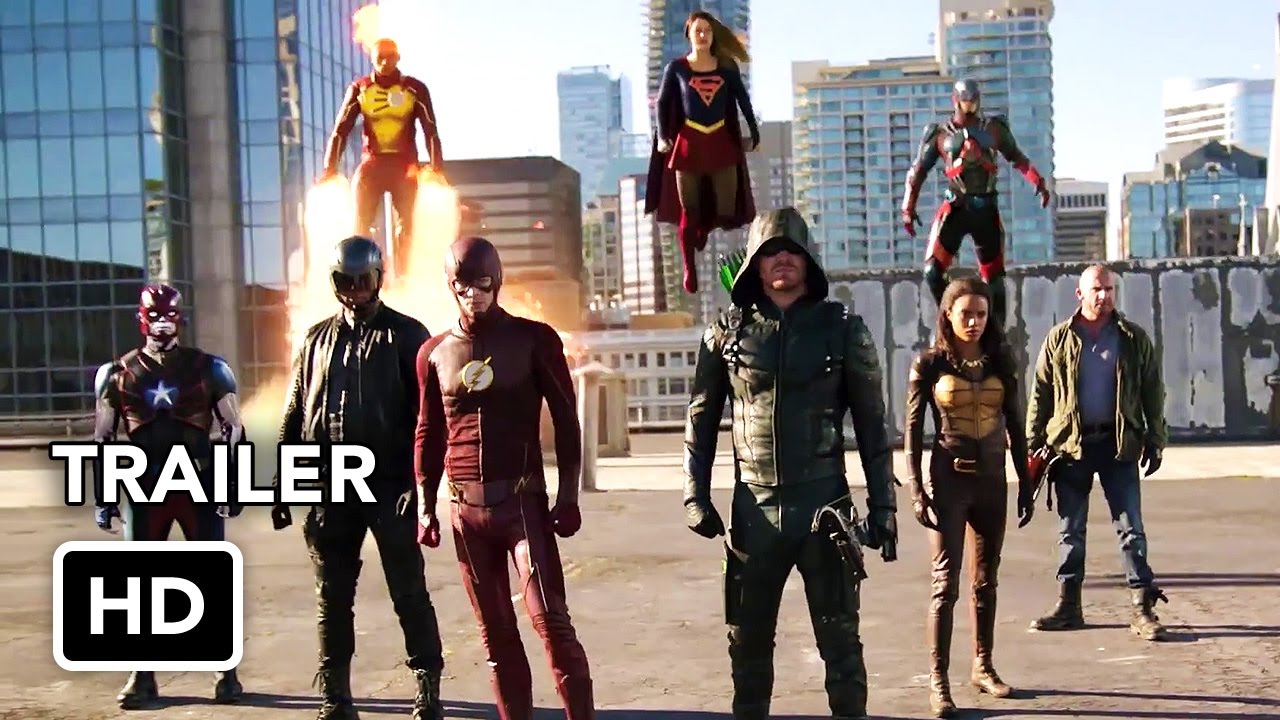 After Supergirl makes a jump from CBS to The CW for her second season, the larger Invasion! crossover takes place. Though Supergirl only acts as a lead-in for the arrival of the Dominators, and our heroes banding together, she’s still fully present.

This is another of the crossovers where watching each season from the start helps. Not necessary, but advised. Later on, Kara and Barry get together for a musical episode in The Flash. Good fun! 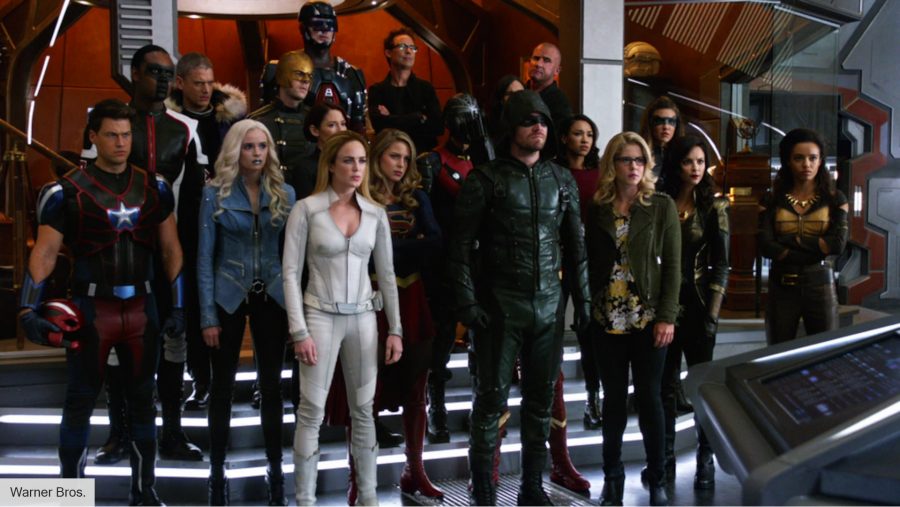 The Arrowverse comes together to fight nazis. What better enemy for The CW’s four superhero shows to battle in their first large-scale four-parter? Our version of the heroes find themselves on Earth X, a dimension where the Axis forces didn’t lose WW II. They meet embattled counterparts who’ve been fighting the good fight against fascist scum for years, and the Nazi versions of Arrow and Supergirl.

Despite the bleakness it all ends with everyone escaping, and having a nice double wedding. Black Lightning starts airing, but it’d be a while before Jefferson ‘Black Lightning’ Pierce (Cress Williams) becomes a full part of the universe. 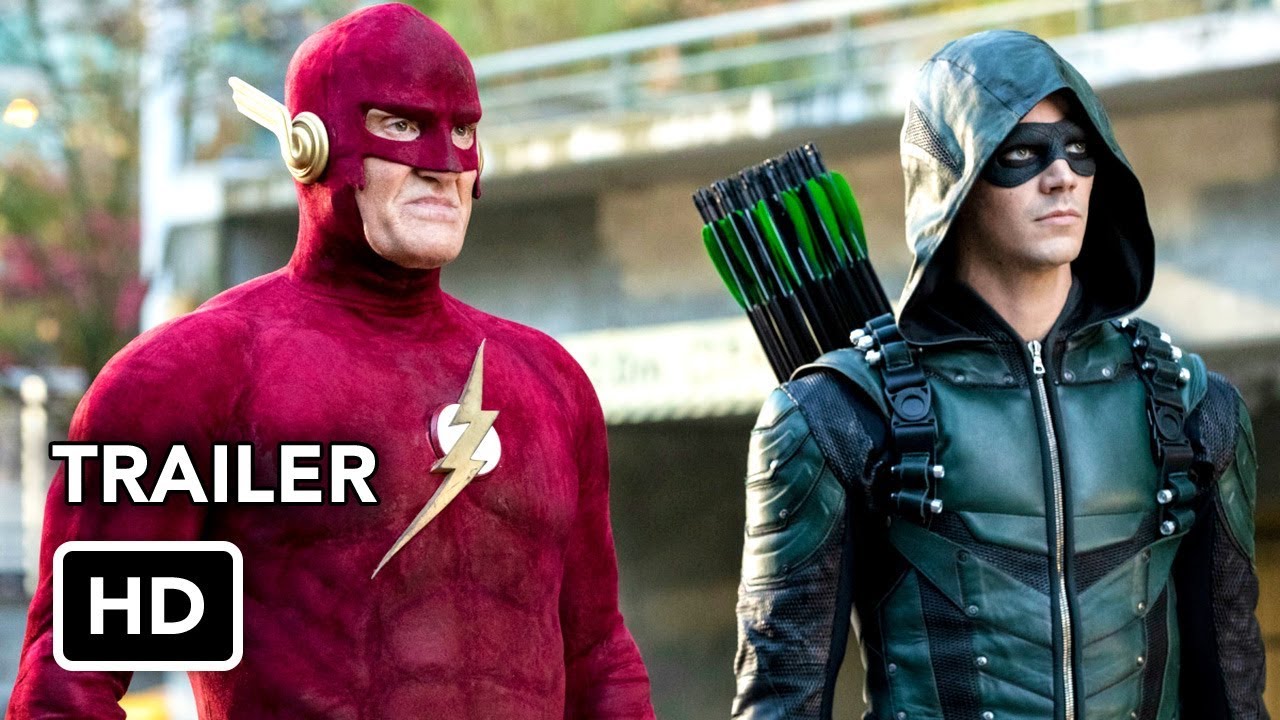 At this point in time, it still wasn’t clear if Batman or Superman would ever join in the growing DC TV universe, given their established roles in the DCEU. Then, for Elseworlds, Gotham City is introduced, bringing in Ruby Rose to play Arrowverse’s Batwoman, Lois Lane (Elizabeth Tulloch), and, finally, Superman, Clark Kent (Tyler Hoechlin).

Black Lightning was still its own corner, but that’d change soon enough, since all the groundwork was being laid down for the most ambitious crossover yet, next season. 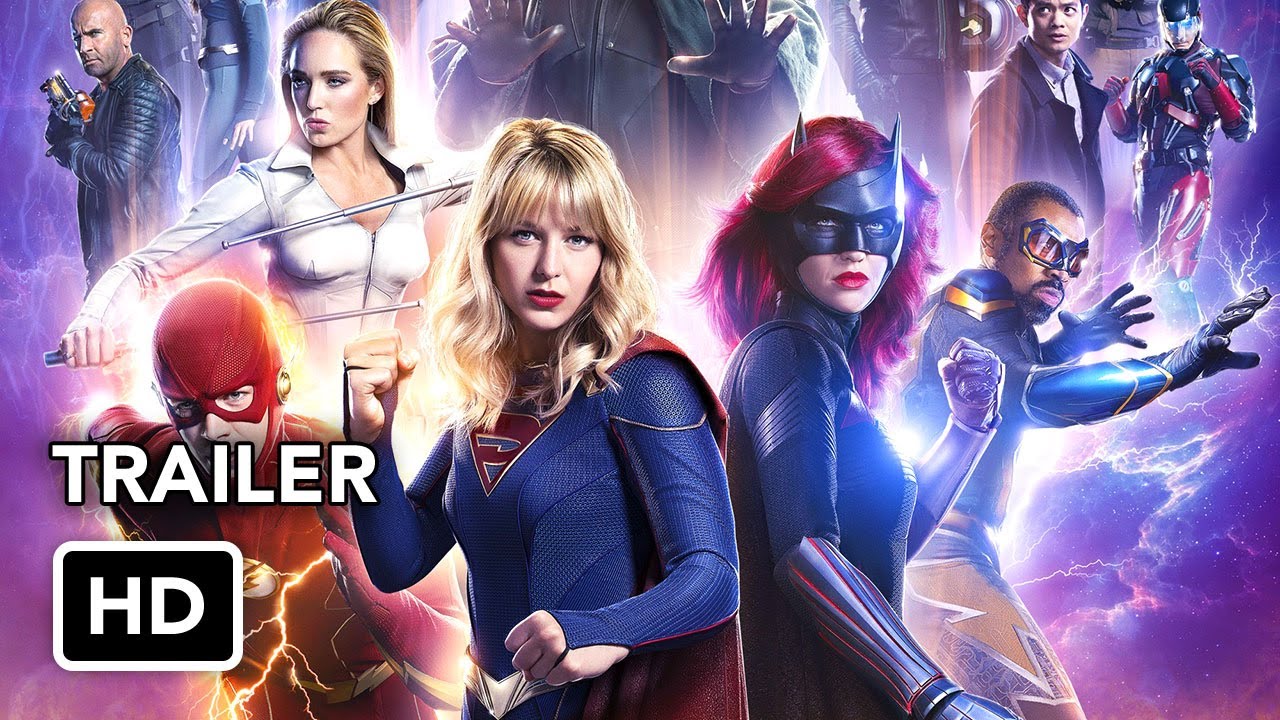 Here we are, the ultimate crossover of the Arrowverse’s disparate groups and heroes, adapting a cornerstone of DC comics canon. Crisis on Infinite Earths is a five part epic of campy televisual entertainment, bringing in Black Lightning, and throwing Batwoman into the deep end for her first season.

A few unexpected faces join in, too, from across the board of DC TV and movies, but no spoilers here. If you know the source material, you won’t be lost by just jumping in here, but if you don’t, the preceding episodes are more helpful than usual. Dimension-hopping is complicated, and understanding the arcs and motivations of everyone involved will make sure you’re never lost among the colourful battles and impassioned speeches.

This is the peak of the Arrowverse, and it’s a good time. 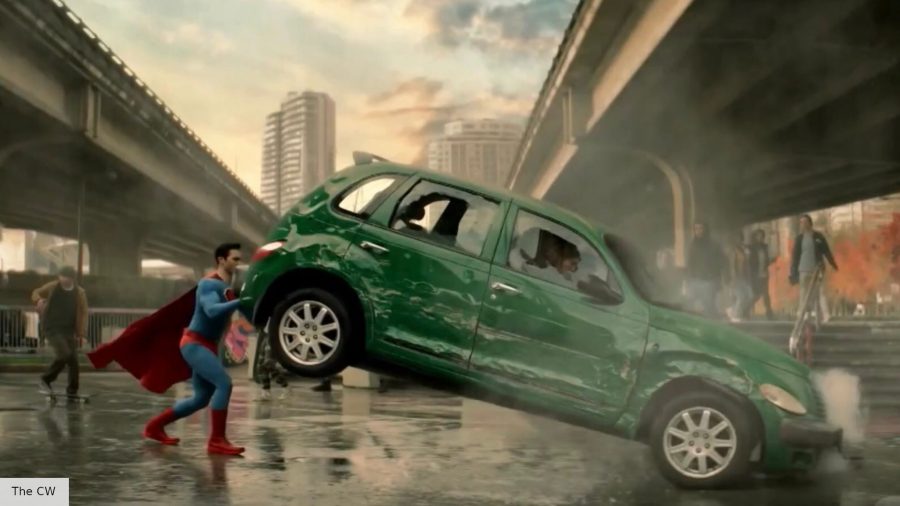 Arrow’s eighth season was its last, ending in January 2020. Due to the pandemic, The CW’s shows halted production, resulting in seasons due to start in the 2020 being pushed back to 2021.

Supergirl and Black Lightning ended this year, The Flash has been renewed through to its eighth season, and Batwoman continues to its third season.

Superman and Lois started in February, featuring Hoechlin and Tulloch in the lead roles, and was renewed for another season in March. We can’t tell you when these heroes will meet again, but rest assured we’ll have it listed for you when they do.