Back in 2018, a new horror movie franchise was born. The huge success of the original A Quiet Place movie, one of the best monster movies of the last decade, has led to one very successful sequel already, and a third movie is on the way. Sadly though, we will have to wait a little longer for the new film, set to be directed by Michael Sarnoski.

A Quiet Place 2, directed by John Krasinski, performed well at the box-office and was one of the best horror movies of 2021. The movie, of course, ended on a cliff-hanger, and just like its predecessor, opened up a whole host of opportunities for further stories in the A Quiet Place universe.

The third film in the thriller movie franchise has already had its share of hurdles though, with Midnight Special director Jeff Nicholls originally attached to direct, before leaving the project in October 2021. And now, the upcoming spin-off movie has had its release date pushed back due to the ongoing pandemic.

Paramount Pictures originally slated the A Quiet Place sequel for March 2023, but has now decided to push back the release date for the sci-fi movie by six months, with a September 2023 release now scheduled. This follows the news that other Paramount properties would also be delayed, such as the next Mission Impossible movies.

The next A Quiet Place movie will see Michael Sarnoski take to the director’s chair, following on from his critically-acclaimed drama movie Pig, from 2021. The events of this third movie are said to be separate from the storyline we have previously seen in the franchise.

With this in mind, Sarnoski’s movie is unlikely to feature stars Emily Blunt and John Krasinski, though the latter will be on board as a producer. It is believed that Krasinski also has plans to return as director for a further film in the series, which will continue the story of the Abbott family. 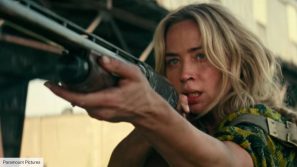