The planned Quiet Place spin-off horror movie has hit a major snag; it’s lost its director. Deadline reports that Jeff Nichols, the man behind Midnight Special, has left the untitled spin-off. The split is apparently relatively amicable, though, and Nichols is reportedly moving on to a science fiction movie that the executives at Paramount are confident will be a hit.

Sources tell Deadline that the hunt for Nichols’ replacement has already begun as the Quiet Place spin-off is a high priority for Paramount.  This makes sense considering how much money the sequel made at the box office. A Quiet Place 2 was one of the first films to be released after Covid-19 restrictions were relaxed, and it broke several box-office records as a result.

In its three-day opening weekend, it raked in $48.3 million at the US box office and became the first film of the pandemic to break the $100 million mark. The film wasn’t just a hit in the States. Worldwide it grossed an eye-watering $297.4 million, making it one of the best performing films of the year.

Not much is known at the time of writing about the plot of the Quiet Place spin-off. We know it’s based on an idea by John Krasinski, who hopes the film will lay the foundation for a Quiet Place shared universe that Paramount can develop in the future.

In an interview with Empire, writer/director John Krasinski teased the idea that A Quiet Place spin-off will be different from parts one and two. “I’m really excited about the third instalment because it’s going to do something that we haven’t done before,” he explained.

As it’s a spin-off to the mainline series, it’s unlikely that the stars of A Quiet Place,  Emily Blunt, Millicent Simmonds, and Noah Jupe, willreprise their roles for the film. Still, Krasinski will be producing, so it will hopefully still have the charm of the first two movies. 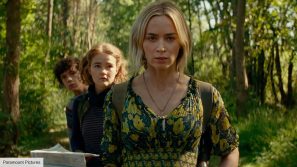