John Krasinski, star of the hit TV series The Office and director of A Quiet Place 2, is venturing into the animated DCEU as none other than Clark Kent. Taking to social media, the filmmaker shared the news that he will be voicing Superman in the upcoming animated movie, DC League of Super-Pets.

As you could probably guess from the film’s name, DC League of Super-Pets, the family movie will follow a group of super-powered animals, who are closely linked to the DCEUs most famous heroes – such as The Flash, and Batman. Written by Jared Stern and John Wittington – the directing duo behind The Lego Batman Movie – DC League of Super-Pets will see the fluffy superheroes fight to prevent global threats and save the world.

Krasinski posted a picture on Twitter of Superman flying next to his canine pal, called Krypto (voiced by Dwayne Johnson), revealing the casting news, as well as expressing his excitement to work alongside Johnson. “Always wanted to do a buddy movie with Dwayne Johnson,” Krasinski captioned the post. “Well, these are the roles we were born to play! (FYI… DJ’s the one with the tongue.)”

Always wanted to do a buddy movie with @TheRock . Well, these are the roles we were born to play! (FYI… DJ’s the one with the tongue) @DCSuperPets !! pic.twitter.com/eu6IVJXdd4

We are curious to see how this animated “buddy comedy” plays out for both Krasinski and Johnson in the future. Luckily we won’t have to wait long to see the pair in action. DC League of Super-Pets is scheduled to hit theatres on May 20, 2022. 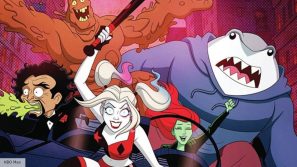 Harley Quinn season 3 release date, cast, trailer, and more
Get involved Continue the conversation over on The Digital Fix Forum