When will Spider-Man : No Way Home be released? The new Spider-Man movie is almost here and speculation is rampant online as to what the film might be about. How will Peter Parker cope with his secret identity being revealed to the world? Is Mysterio really dead? Are Aunt May and Happy Hogan still dating? Hopefully, all of this will be revealed and more.

As things stand, official information is relatively thin on the ground, but don’t worry, we’ve scoured the web (no pun intended) to find every possible thread of information we can about Spidey’s third solo outing in the Marvel Cinematic Universe. From theories about trips into the multiverse, to actors getting a little too candid during interviews, there’s no stone we’ve left unturned during our spider hunt.

So if you’re looking for information on Spider-Man: Far From Home, there’s no need to head on over to the Daily Bugle because we’ve got the photos of Spider-Man that J Jonah Jameson was looking for. So grab your web-shooters, put on your clean mask, and get ready, we’re going in.

SPIDER-MAN: NO WAY HOME RELEASE DATE: When Is No Way Home Out?

Spider-Man: No Way Home is scheduled to release in UK theatres on December 15, 2021, and in the US on December 17, 2021. It was previously set for release in July 2021. Still, the ongoing Covid-19 pandemic saw the MCU Wallcrawler’s third outing delayed until November 5 and then it was further delayed to its current December release date.

This, we can confirm. #SpiderManNoWayHome only in movie theaters this Christmas. pic.twitter.com/kCeI8Vgkdm

The first official trailer for Spider-Man: No Way Home arrived in August, and it was worth the wait. Benedict Cumberbatch’s Doctor Strange helps Peter out by performing some magic and, uh oh, the multiverse seems to have been shattered.

Among the glorious visuals, we have Alfred Molina’s Doctor Octopus and a hint that one of the Green Goblins is knocking about as well. Poor Peter, he’s truly in over his head this time around.

Spider-Man: No Way Home got a new trailer on November 17, which showed off more of the multiversal villains including Green Goblin, Sandman, Electro, The Lizard, and Doc Ock. It also teased that Peter and Doctor Strange would come to blows.

Tom Holland is returning as the wisecracking Wallcrawler Spider-Man, aka Peter Parker. Joining Tom is his man in the chair Ned Leeds (Jacob Batalon) and MJ (Zendaya), Pete’s sardonic girlfriend. It wouldn’t be a Spider-Man movie without Aunt May (Marisa Tomei), who’ll continue to be Pete’s cool maternal figure.

This is where things get interesting, though. In each of the MCU Spider-Man films, he’s had an older superhero ‘mentor’. In Homecoming, it was Iron Man, in Far From Home it was Mysterio (and Nick Fury, sort of), and in No Way Home, it’s going to be the Bleeker Street magician himself, Doctor Stephen Strange (Benedict Cumberbatch).

In a recent interview with The Hollywood Reporter, Cumberbatch discussed the relationship between Peter and Strange. “There’s a close relationship, they’re neighbourhood superheroes, and they’ve had an experience or two. They’ve got history. It might be the case that Peter asks me to help him do something? I think I’m allowed to say that much,” Cumberbatch joked. “I help him fill in his tax returns. That’s what I do.”

The photo shows Doctor Strange greeting Spider-Man in front of what appears to be the NY Sanctum Santorum, as well as featuring a F.E.A.S.T truck! pic.twitter.com/0Xo5qVK3yV

Strange’s appearance has led to a lot of fan speculation due to recent goings-on in the MCU. Kevin Feige has said both WandaVision and Loki will tie into the sorcerer supreme’s next film, Doctor Strange in the Multiverse of Madness. Could it be that Spidey’s next film will take a trip into the Spider-Verse with Strange serving as his guide?

But who’ll Spidey be battling? Well, two old faces are returning for No Way Home. Both Jamie Foxx and Alfred Molina are back as Electro and Doctor Octopus. 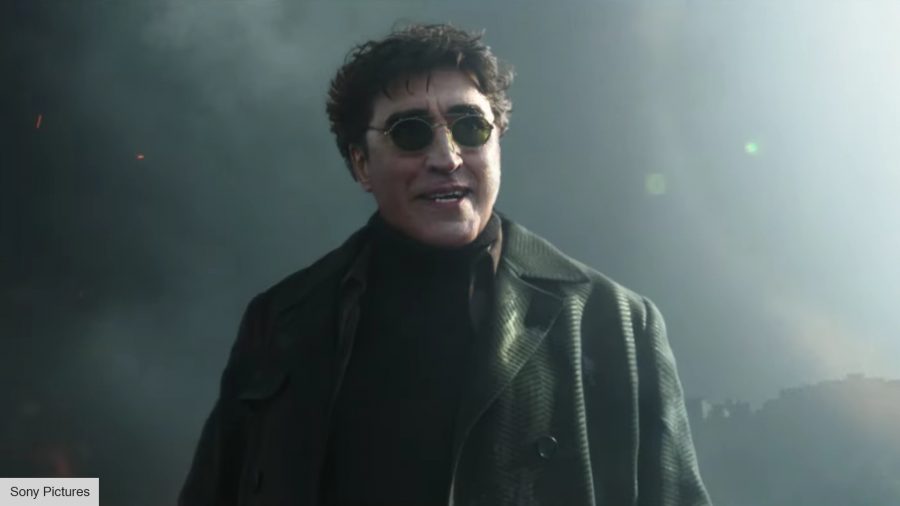 What!? How does that work? Well, to be honest, we don’t know, but people think they might be playing multiverse versions of the characters we saw in Amazing Spider-Man 2 and Spider-Man 2. If the villains are returning, though, that’s got people wondering, are the heroes?

Hannibal Buress has also teased that fans will get to see him as Coach Wilson once again, despite being absent in the recent trailer. The actor shared a rap edited over footage from the new trailer with his appearances in Spider-Man: Homecoming. In it, he says, “Coach Wilson in it! It’s the gym teacher, and we really get it! Two scenes? Maybe three? Yeah, we’ll see what they keep! I don’t know, I haven’t seen the cut!”

So, we know that the actor filmed for the movie at least. However, whether Coach Wilson made it past the editors into the final cut is yet to be seen. 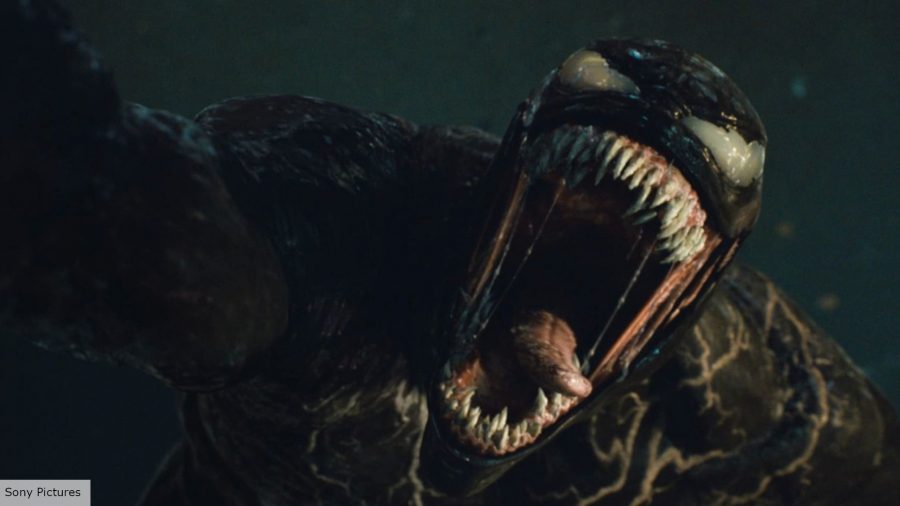 Is Venom in Spider-Man: No Way Home?

Warning this section contains spoilers for Venom: Let There Be Carnage – you’ve been warned! Venom 2’s post-credit sting revealed that Eddie Brock (Tom Hardy) and his symbiotic suit have somehow made it to the Marvel Cinematic Universe.

Whether this means the pair will make an appearance in the movie, we can’t say for certain but it definitely seems like Sony Pictures is building to some sort of confrontation. The company even teased it on its official Twitter account.

Maybe Doctor Strange’s spell brought the lethal protector into the MCU with Doc Ock and the other members of Spidey’s rogue’s gallery?

Are Tobey Maguire and Andrew Garfield in Spider-Man: No Way Home?

ok here’s some actual photos of the movie (yes, i know you saw them already) pic.twitter.com/lrQmM2aauc

The honest answer is, we don’t know. There’s been plenty of rumours and speculation online that both the previous Spider-Men are going to appear, but this has been denied by Marvel, Sony and even Andrew Garfield.

When asked about “ruining his surprise return” by the Happy Sad Confused podcast host Josh Horowitz, Garfield said: “There isn’t anything to ruin, bro!” He went on to explain that no one’s called him about the film, joking that he’s pretty confident he’d have gotten a phone call by now if he was in the film. Tom Holland also denied that his predecessors are returning; he told Esquire: “No, no, they will not be appearing in this film.”

Of course, the notion of a live-action Spider-Verse is just too delicious of an idea for fans to drop even when people deny it. While we don’t want to get into too much speculation, the return of Jamie Foxx’s Electro and Alfred Molina’s Doctor Octopus does lend credence to the idea that some multiverse shenanigans are going on.

Doctor Strange’s appearance also lends weight to the argument we’ll be exploring different realities and dimensions. That said though Marvel fans have been burnt before, remember WandaVision and the clever casting of Evan Peters as Ralph Bohner, aka a fake Pietro Maximoff? Maybe it’s all part of a clever misdirect.

What is the Spider-Man: No Way Home plot?

Spider-Man: No Way Home is going to be big. How big? Well, director told Empire that the film is basically Spider-Man: Endgame, so yeah, this is an ambitious movie.

According to the official synopsis that accompanied the trailer reads: “For the first time in the cinematic history of Spider-Man, our friendly neighbourhood hero is unmasked and no longer able to separate his normal life from the high-stakes of being a Super Hero. When he asks for help from Doctor Strange the stakes become even more dangerous, forcing him to discover what it truly means to be Spider-Man.”

Out of this world action: Best action movies

Essentially, Peter Parker and Doctor Strange accidentally break the multiverse by trying to work some magic on the general public to make them forget he’s Spider-Man. This allows older Spidey cinematic villains to join the MCU.

The trailer confirms Peter is getting a new suit in No Way Home, as teased by some LEGO. This new costume appears to blend design elements from both the Iron Spider armour and his Far From Home suit.