Dwayne Johnson, the hardest working man in Hollywood, is no stranger to film franchises. He’s Black Adam in the DCEU, Hobbs in Fast and Furious, and Dr Smolder Bravestone in Jumanji. Now though, fresh off Red Notice and proving he looks great in a tux, he’s got his eyes on a new prize. Yes, Johnson has joked he’d like a turn behind the wheel of the iconic Aston Martin and be the next James Bond.

In an interview with Esquire, Johnson was asked about his grandfather – who appeared as a Bond villain alongside Sean Connery in You Only Live Twice. While Esquire wanted to know if he would follow in his grandfather’s footsteps and menace the next Bond, Johnson replied he’d be in the spy movie under one condition. He gets to be Bond.

“Yes, my grandfather was a Bond villain in You Only Live Twice with Sean Connery,” Johnson explained. “It was very, very cool. And I would like to follow in his footsteps and be the next Bond. I don’t wanna be a villain. Gotta be Bond.”

While Johnson might seem a left-field choice, stranger things have happened. Never forget that before he slipped on Bond’s designer suit, he was just the star of the TV series Remington Steele.

The role of Bond is currently vacant. Daniel Craig stepped down following the release of No Time to Die, and the hunt is on for the next 007. No official sources have commented on who Barbara Brocolli and the Bond team might be interested in playing the next incarnation of the super spy, but that’s not stopped people speculating.

The usual names are in the mix, Tom Hardy, Tom Hiddleston, and even Tom Holland (Christ? Could I be the next Bond if we’re just casting Toms?), but there are also a few new faces. Lashanna Lynch, who played 007 in No Time To Die, has been suggested, as has Bridgerton’s Regé-Jean Page.

In an interview with The Mirror, Page was asked how he felt about the rumours.  “Ah, the B-word,” he joked. “I think if you are British and do anything of note that other people take notice of, then people will start talking about that.” 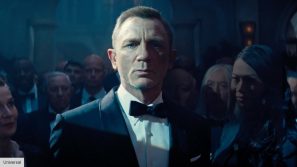 No Time To Die has “far exceeded” MGM’s expectations, studio claims
Get involved Continue the conversation over on The Digital Fix Forum