Dwayne Johnson has marked the end of filming on Black Adam with a tweet paying tribute to the DCEU movie’s crew. Describing the movie as the “hardest undertaking of his entire career physically and mentally”, The Rock offered the crew, actors and director, Jaume Collet-Serra, his boundless gratitude before adding that despite all the hard work, it was “worth every second”.

Johnson finished the tweet with his usual Black Adam sign-off: “The hierarchy of power in DC Universe is changing.” Johnson shared a behind the scenes photo from the set of Black Adam earlier this month. In that post, Johnson, in his full Black Adam costume, loomed over the ruins of an ancient city.

“This image of Black Adam from behind gives you a tactile sense of the absolute massive scale and size of our movie,” Johnson captioned the photo. “You also see a little of the intricate and beautiful textured detail of Black Adam’s bodysuit. (this is not your typical DC or Marvel padded muscle suit). And finally, you get a glimpse of the enormous and appropriate destruction.”

That a wrap on BLACK ADAM⚡️
Incredible journey.
Hardest undertaking of my entire career physically & mentally.
Worth every second.
Boundless gratitude to my 1,000+ crew members, actors and director, Jaume Collet-Serra.
The hierarchy of power in DC Universe is changing.
BA⚡️ https://t.co/adjLrimOYS

Black Adam is traditionally the arch-nemesis of the character Shazam. The two derive their powers from the same mystical source, but while Billy Batson used his powers for good, Adam was corrupt. In the comics, Black Adam was initially an outright villain, but he’s evolved into more of an antihero who protects his homeland of Kahndaq.

Black Adam began production in April of this year after the global pandemic delayed filming. Directed by Jaume Collet-Serra, the film will see Johnson play Teth-Adam, aka Black Adam. Atom Smasher (Noah Centineo), Cyclone (Quintessa Swindell), Hawkman (Aldis Hodge), and Doctor Fate (Pierce Brosnan) will all appear in the film opposite Adam. However, we don’t know the exact plot details yet.

If you prefer your superheroes a bit less grim, check our guide on how to watch the Marvel Cinematic Universe movies in order. 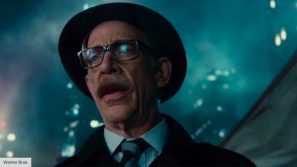