Where is the Top Gun cast now? In 1986, one of the best blockbusters ever took to the skies, Top Gun. Starring the likes of Tom Cruise, Val Kilmer, and Meg Ryan, the ‘80s movie has become iconic, with a killer theme song, memorable volleyball scene, and some of the best stunts ever seen on the big screen.

Following the blockbuster, many cast members have gone on to star in award-winning roles, hit TV series, and a few have even taken a step behind the camera to direct and produce as well. In short, if you were in the action movie Top Gun, chances are, just like the adrenaline-fuelled pilots in the flick, you haven’t slowed down at all.

But with the release of the sequel to the ‘80s movie, Top Gun: Maverick, you may be wondering what has the original cast been up to these past decades, or better yet, if they returned to the franchise in 2022. Well, fear not, Mavericks, because we answer all your questions below. Here is all the info on the OG Top Gun cast, explaining where they are now and what they have planned for the future.

Who is in the Top Gun Cast? 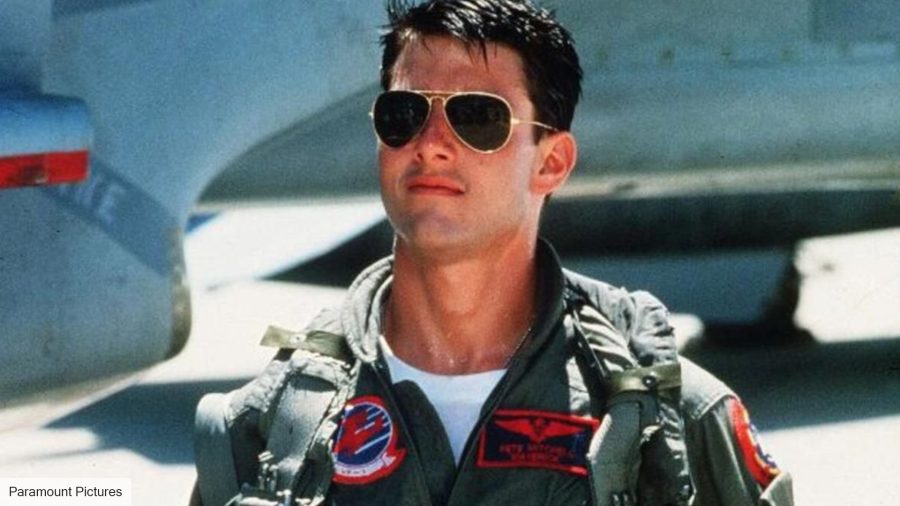 Tom Cruise played none other than the leading man in the skies in Top Gun – Pete ‘Maverick’ Mitchell. The enthusiastic adrenaline junkie’s cockiness and killer instincts turned him into a legend. Following Top Gun, Cruise would take Hollywood by storm, becoming one of the highest-grossing box office actors of all time and astounding critics with award-winning performances.

And of course, the actor has developed fame from his commitment to performing all his own stunts in hit flicks such as Mission Impossible, Reacher, and Edge of Tomorrow. Cruise will be returning to the cock pit in Top Gun: Maverick – reprising his role from the ’80s. He is also currently filming Mission Impossible 8 and is attached to the SpaceX project – the first Hollywood movie scheduled to be filmed in outer space. 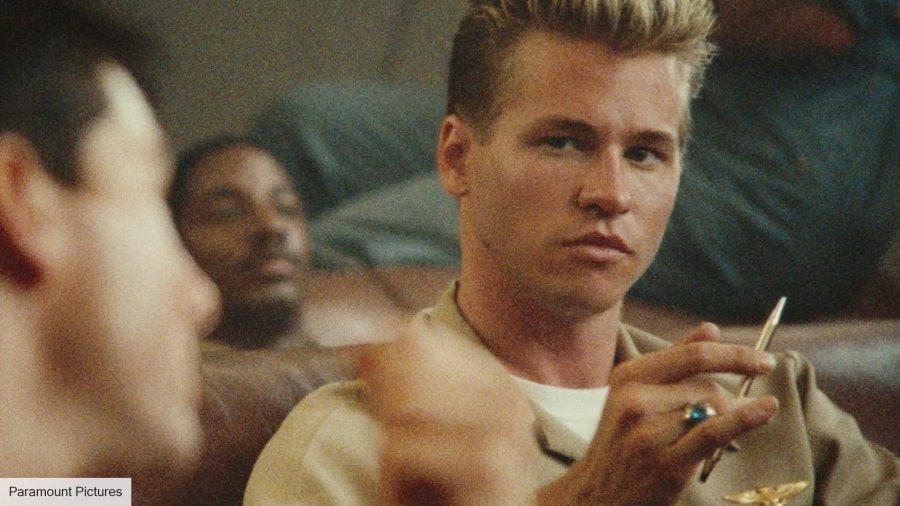 Few films featured as iconic a pair of frenemies as Maverick and Iceman. Val Kilmer played the blonde and confident Tom Kazansky, aka Iceman, the pilot who was Maverick’s rival but, by the film’s climax, turned into a fast-flying friend. Like Cruise, Kilmer has had a stellar career before and following his time in Top Gun.

Some of his most notable credits include playing Jim Morrison in The Doors, Simon Templar in The Saint, and of course – Bruce Wayne in the ‘90s movie Batman Forever. He has also received nominations for the Saturn Award for his performances in the action movies Heat, and Kiss Kiss Bang Bang.

In 2017, Kilmer revealed he had throat cancer and plugs in an electric voice box into his trachea to speak. However, In 2020, the actor reported that he has been cancer-free for four years, and has since been involved in several films – including the Top Gun sequel, Top Gun: Maverick, where he reprises his role as Iceman. He has also recently been cast as Mark Twain in the drama movie Mark Twain and Mary Baker Eddy. 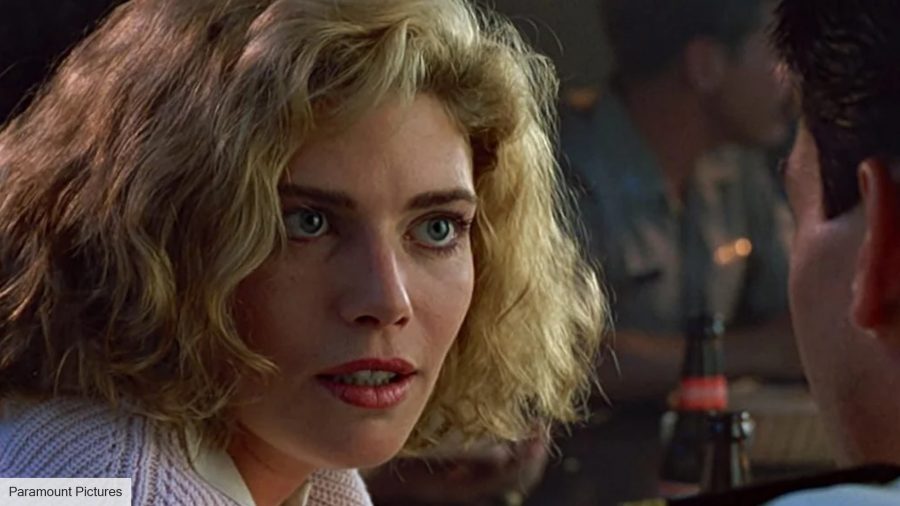 Kelly McGillis played the part of Charlotte ‘Charlie’ Blackwood in Top Gun – the self-assured instructor who would also go on to be Mr Maverick’s love interest. Since the ‘80s action movie, McGillis has had a steady number of acting credits attached to her name. Her most recent role was in 2020 on the TV series Dirty John as Miriam Saslaw.

Besides her acting notoriety, McGillis is a mother of two, and was married to Melanie Leis in 2010 after publicly coming out as gay the year prior. McGillis and Leis have since split, and in a 2013 interview with Movie Talk, McGillis shared how she is now sharing her talent, teaching her craft in a studio in North Carolina.

Despite being such a central figure in Top Gun, McGillis is unfortunately not returning for Top Gun Maverick (heart-breaking, we know). 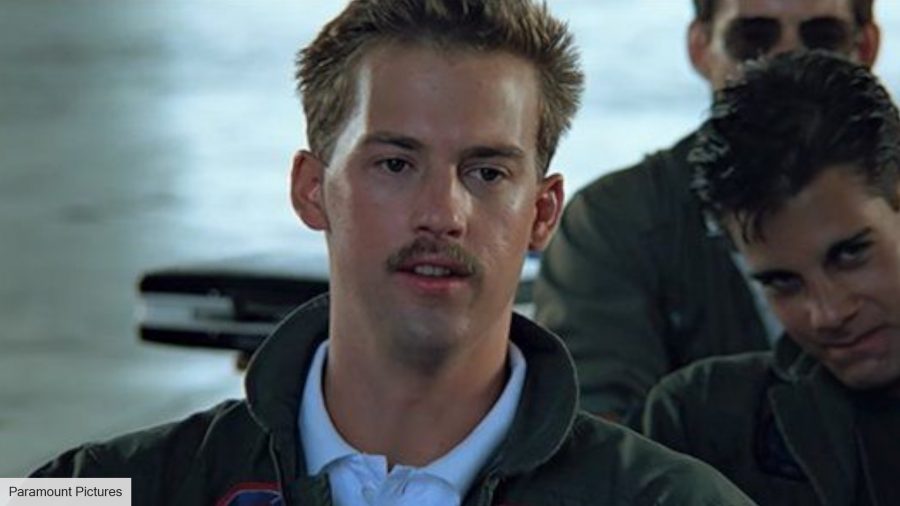 If you don’t tear up at the mention of Goose, there may be something wrong with you, period. Anthony Edwards portrayed Maverick’s best friend and first radar Intercept Officer Nick ‘Goose’ Bradshaw. In the film, the character was tragically killed during an incident in the sky.

Since his character is no longer with us, Edwards isn’t in the 2022 movie Top Gun: Maverick. However, the actor has been keeping plenty busy even without the role in the aerodynamic sequel. Appearing predominantly in TV series, the star has worked on ER, Law and Order, and Blue Bloods. He also played the role of Alan Reed in the popular 2022 Netflix series Inventing Anna, and Bruce Dunlevie in the TV mini-series WeCrashed.

In 2017, Edwards wrote an essay on Medium where he said producer Gary Goddard assaulted him. Since publishing the piece, he has become a board of directors at 1in6 – a non-profit organisation dedicated to supporting those who have suffered abuse. 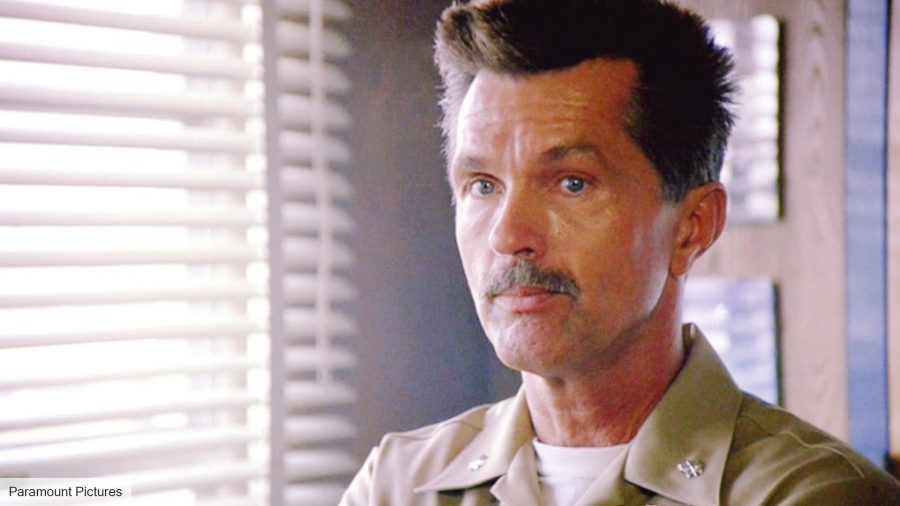 Tom Skerrit was Mike ‘Viper’ Metcalf in Top Gun. Viper was a chief instructor who had flown with Maverick’s father back in the day. Skerritt has over 100 acting credits to his name, so needless to say, he has been plenty busy following his gig as Viper.

The actor has starred in films such as Steel Magnolias, Contact, and the acclaimed Robert Redford movie A River Runs Through It. he has also had a thriving TV career, starring in sitcoms and dramas alike. Skerritt has appeared on TV series such as Will and Grace, Cheers, Homeland, The Good Wife, and Picket Fences.

In fact, his work in Picket Fences even won him an Emmy in 1993 – so yeah, the years haven’t gotten in the way of his screen time. 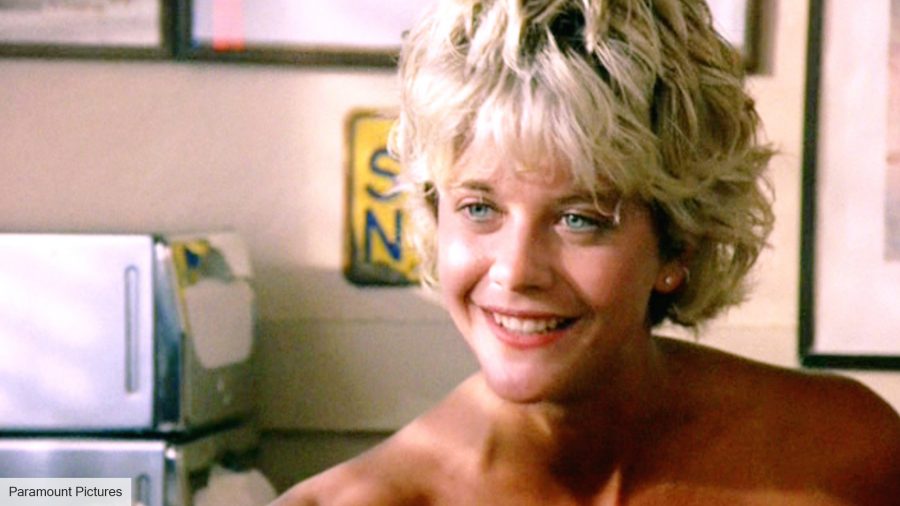 What arguably made Goose’s death even more tragic was the family he left behind. Meg Ryan plays the role of Carole Bradshaw, the unlucky pilot’s wife. After Top Gun, Ryan would become Hollywood’s rom-com sweetheart of the ’90s.

Love is in the air: Best rom-coms

Appearing in the leading roles of Sleepless in Seattle, You’ve Got Mail, and the iconic When Harry met Sally, Ryan has become a household name and essentially shot into stardom following the ’80s. Besides her work in front of the camera, Ryan has served as a producer and director too. In 2015 she helmed the film Ithaca, and since 1995 she has produced six titles, including French Kiss, Desert Saint and Picture Paris.

Although Ryan is still acting – and despite Goose’s son making an appearance in Top Gun: Maverick – she is another cast member from the OG film who won’t be returning to the franchise. Her last role was in 2018 in the TV series Picture Paris. 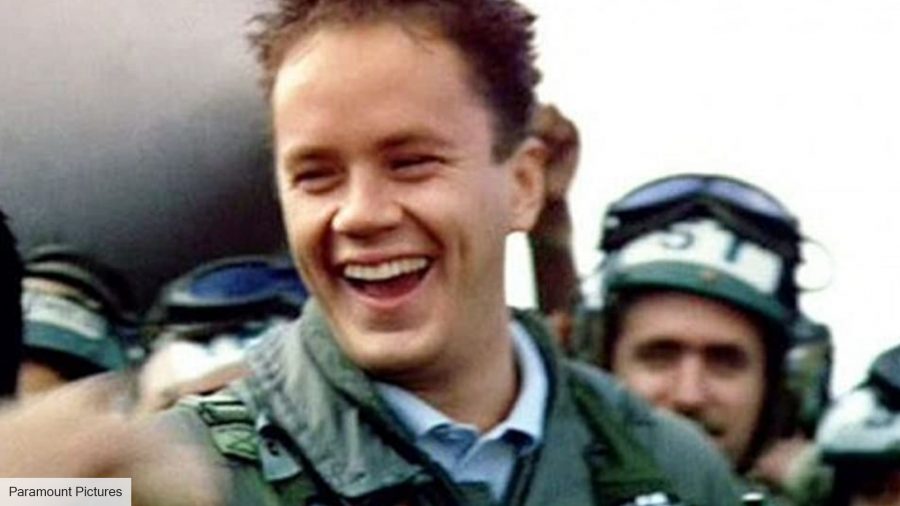 After the tragic death of dear old Goose, Maverick needed a new Radio Intercept Officer, so cue in Merlin, played by Tim Robbins. After playing Cruise’s new partner, Robbins hasn’t stopped taking the world of film and TV by storm. In 1986 ( the same year as Top Gun was released) he would star in Howard the Duck. In the ‘90s Robbins would appear in Jacob’s Ladder and the award-winning flick Shawshank Redemption.

If that wasn’t impressive enough, Robbins would go on to win an Academy Award and Golden Globe for his role in Mystic River as David Boyle. In recent years, he has been focusing on the world of TV, having starred in Castle Rock. Currently, he is filming the drama series Wool, in which he is scheduled to appear in three episodes as Bernard. 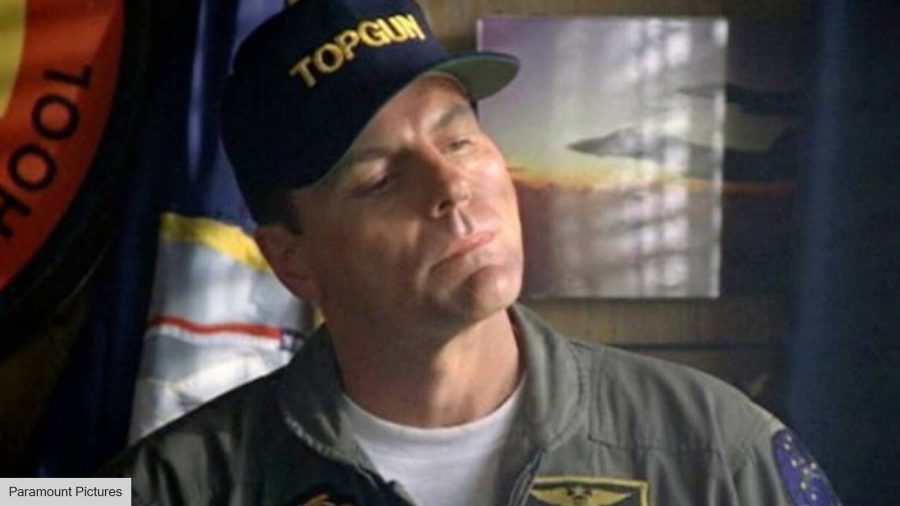 Michael Ironside played the TOPGUN instructor Rick Heatherly, better known by his call sign Jester. He was the guy who threatened to kick Maverick out of the school, remember? Over the years, Ironside has appeared in several popular films, TV series, and beloved franchises.

He was in the comedy movie Starship Troopers, and appeared in the Marvel movie X-Men: First Class, Total Recall, and The Next Karate Kid. On the TV side of things, Ironside voiced Darkseid in the DC animated series Harley Quinn, starred in the drama series The Dropout, and guest-starred in CW’s The Flash. Other credits include The Alienist, Hawaii Five-O and Transformers: Prime.

In 2018, Ironside revealed how he had survived both Thyroid and Prostate cancer. Luckily the star is healthy and well now as he has a number of projects currently in the post-production stage, such as the sports movie The Fight Machine, and the fantasy movie The Jester from Transylvania. 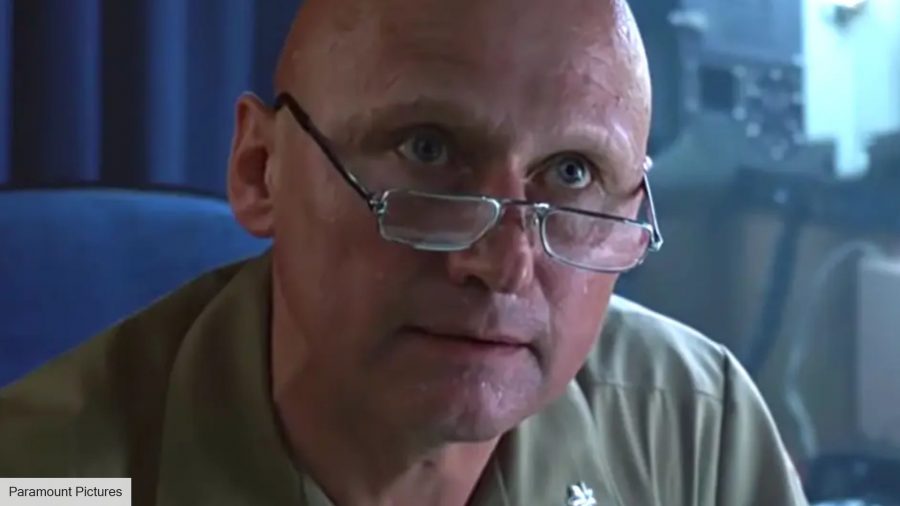 Maverick wouldn’t be the loveable rebel we’ve all come to know without his tight-laced USS Enterprise Carrier Air Group captain, eyeing him with disapproval. James Tolkan was Tom ‘Stinger’ Jordan in the ‘80s movie. It was he who openly reprimanded Cruise’s character for being reckless and disobeying commands. It was also his character who sent Maverick and Goose to the naval fighter school TOPGUN.

Tolkan has also had plenty of guest appearances in TV series. The star has appeared in The Pretender, Cobra, The Equaliser, and The Fresh Prince of Belair. 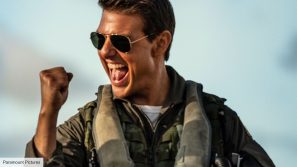