How do you watch Blumhouse’s Purge movies in order? Created by James DeMonaco, the dystopian horror movies about the deadly American holiday have thrilled us for years. No one can deny that the Purge movies are a gory treat. Packed with violence, wacky murderous masks, and some political commentary, you’ll struggle to find a horror universe as fun as this. But let’s be honest with multiple films, a TV series, and a muddled release order; the Purge can be a tricky franchise to keep track of.

The Purge movies are set in an alternate version of America, where a brutal annual holiday called the Purge is celebrated. In an effort to reduce crime, the government allows a 12-hour long period of pure chaos, where all crime becomes legal. Only politicians and children are exempt from the Purge; everyone else is left to fend for themselves, leading to yearly nationwide carnage. The popular franchise has spawned five movies and even had a TV series that ran for two seasons, all based around this killer concept. However, as we mentioned before, these films aren’t numbered, and their release dates aren’t chronological either. As a result, you may be left wondering what is truly the best way to watch this adrenaline-inducing franchise.

Well, the Digital Fix is here to help. That’s right; it’s time to lock your doors and tune into the New Founding Fathers of America’s broadcast because we’re deep-diving into The Purge cinematic timeline. Here we have rounded up the best watch order for all The Purge films and the TV series, making sure that you can enjoy the action-packed murder spree in chronological peace – with no timeline confusion insight. Warning spoilers ahead!

How do I watch the Purge movies in order? 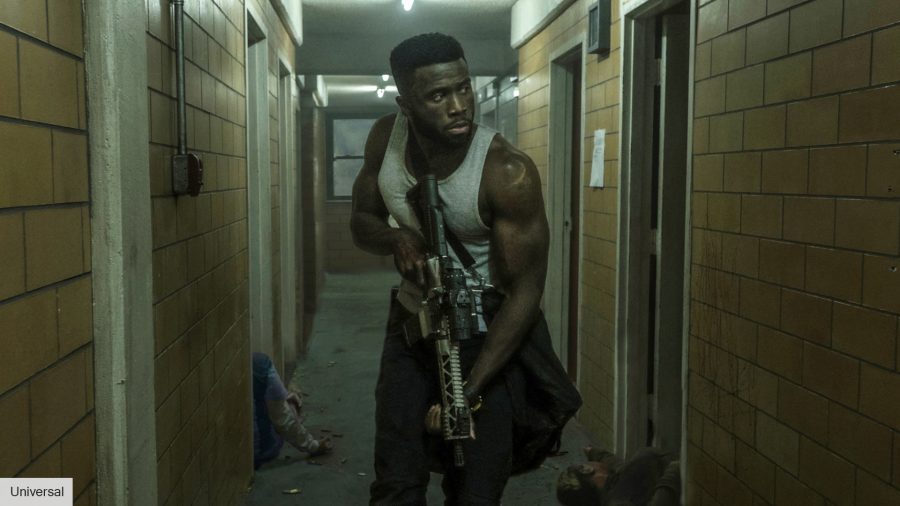 It all begins in 2014, when the diabolical political party, The New Founding Fathers of America, won the US election. Being literally the worst, the NFFA sets out to destroy the lower economic class in the US and maintain political control through fear and blood. The movie’s plot kicks off in 2017, where the NFFA decided to use Staten Island as the testing ground for their new social experiment to “get rid of crime”.

The experiment involves allowing all crime to be legal for 12 hours (sound familiar). If participation levels met expectations, the NFFA would roll out the new national blood bath as a nationwide holiday. However, we witness that right from the start, the experiment has been rigged. The political party begins sending out hired killers, white supremacists, and violent fascists to the area once they realise that people just typically don’t want to turn into bloodthirsty maniacs.

Thanks to their interference, the NFFA manages to pass the experiment as a success, and the annual 12-hours of mayhem is turned into a state-sanctioned holiday. Here we learn how The Purge came to be, and see how it has always been used as a weapon against the underprivileged and marginalised in society. 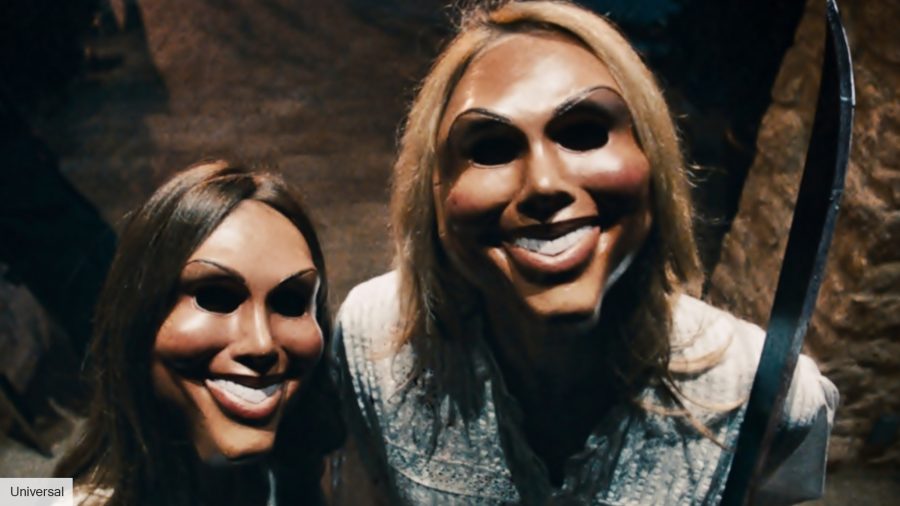 It is five years later, and The Purge is now an established American holiday. Yep, that terrifying 12-hour long bloodbath we saw in Staten Island is now an annual event. However, in this film, we witness The Purge through the eyes of well-off suburbanites. Unsurprisingly we see that rich people tend to fare better during The Purge, safe behind their expensive armed houses while the poor are targeted on the streets. It’s almost like the NFAA are deliberately trying to get rid of certain people in the population (nudge, nudge).

The movie follows James Sandin, a security salesman who has made a fortune off the Purge. However, even he isn’t safe from the killing spree. James ends up taking in a homeless man named Dante (remember that name) who is running from a group of murderous wealthy killers. In the process of doing so, James also becomes a target, and he and his family must fight to survive. Here we are also introduced into religion becoming intertwined in the series, as the wealthy use Purge Night to cleanse the streets and release “the beast within.”

The Purge is seen as a sacred act that just so happens to favour the extremely privileged. A bit wild, isn’t it? Well, don’t worry, it gets crazier. The Purge ends with Dante saving the family, introducing him into the cinematic timeline to become a central figure in the later films. 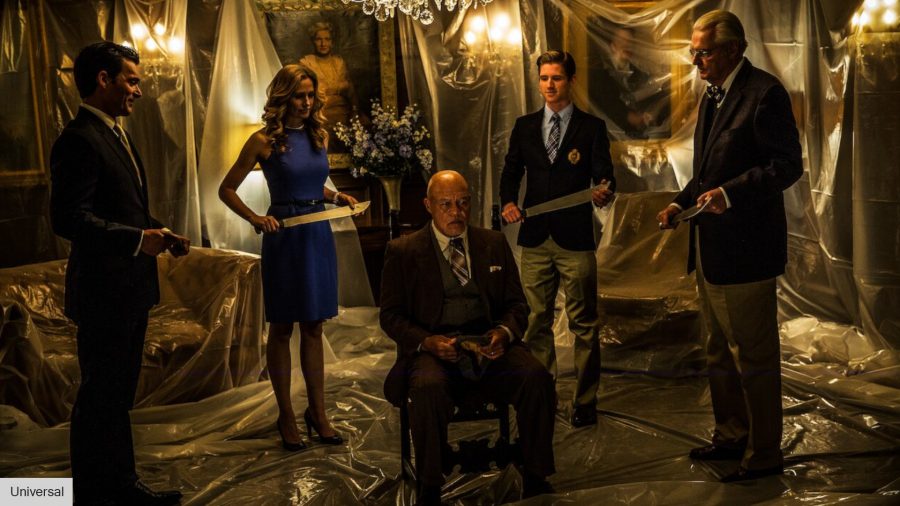 In 2023, only a year after the Sandin’s Purge plight, we see some push back to the NFFA, when a Purge rebellion has taken to the streets of LA. Leading this anti-Purge resistance group is Carmelo Johns and Dante from the last movie. Along with showing the mounting pressure on the NFFA, this film also introduces another important figure into the franchise – Leo Barnes, a cop who sets out on Purge night to murder the man who killed his son.

The Purge: Anarchy shows that the NFFA is still doing all the underhanded tricks that they did back in the First Purge, as the government uses the night for nefarious population murder. It’s revealed that the party is hiring more killers and racists to murder innocent people in the housing projects. Leo can’t leave the citizens in need and ends up spending the 12-hours leading innocents to safety and assisting the anti-Purge resistance despite wanting to engage in some Purge related bloodshed himself. 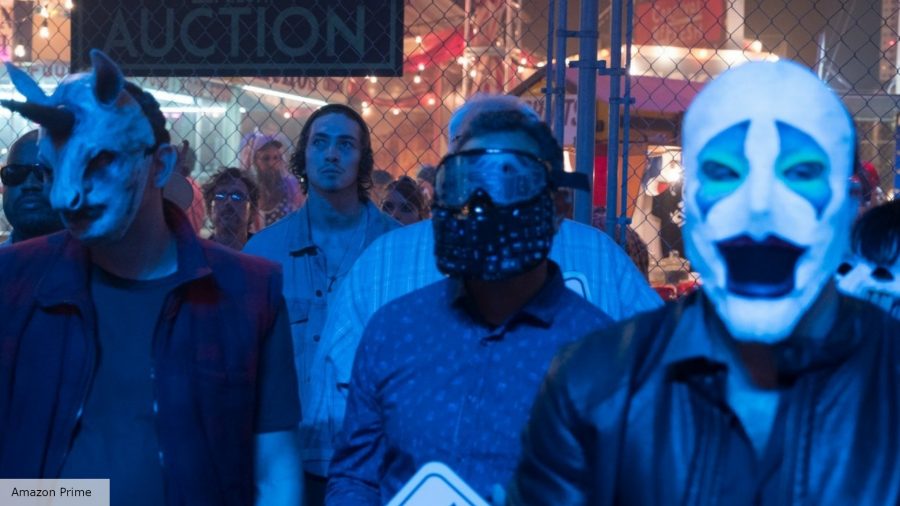 Here is where the NFFA starts to lose control, and scepticism about the murderous holiday really reaches a boiling point. The year is 2027, and The Purge has fully married with the concept of religion. A Purge cult has even formed, where people willingly become victims for the gruesome night, becoming martyrs on the holiest American holiday on their calendar. Of course, the NFFA are behind this whole cult thing and are using it as another means to slaughter the ‘undesirables’ from society.

Besides the religious angle, the holiday has also sported twisted game shows, is a payday for assassins, and don’t even get me started about the Carnival of Flesh (talk about nightmare fuel). It’s safe to say that America has been consumed by The Purge at this point. But cracks in the NFFA’s authority and the ‘pureness’ of the holiday have begun to show.

Fight for your life: The best action movies

The corrupt and discriminatory practices start to unravel as a bunch of government-sanctioned non-Purge night kills from the NFFA are exposed. On top of that, a video of the government killing after the 12-hour buzzer rings – so clearly breaking Purge rules- is broadcast across the country. Let’s just say people aren’t too happy about the revelations. 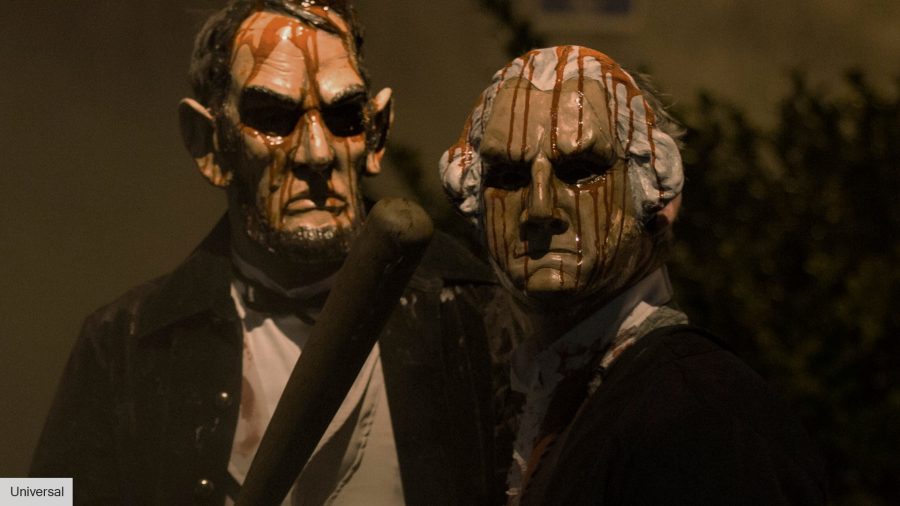 As more opposition against the Purge continues, the NFFA are in danger of losing power. Senator Charlene “Charlie” Roan, an anti-Purge candidate, is gaining popularity, leading the NFFA to change their rules for purge night to off their big political opponent. The no politicians rule for the 12-hour killing spree is revoked, under the guise that the NFFA are trying to promote equality after that PR nightmare we saw at the end of the TV series. However, the rule change is simply due to the party’s plans of hunting down Charlie before the election results come in.

But Charlie isn’t going down without a fight as we see her protected by Leo – now leaving the police force to act as her head of security. Remember Dante, well it turns out that like Leo, he is making a Purge comeback too, now as the leader of the Purge resistance group we met back in Anarchy. Lots of shooting matches happen, assassination attempts are made, and we even see a sacrificial purge mass held at a church.

But Charlie survives the night, and the NFFA is finally out of power. (not for long, though) The film ends with a group of outraged NFFA loyalists reportedly protesting the election results, foreshadowing the events of the next movie – The Forever Purge. 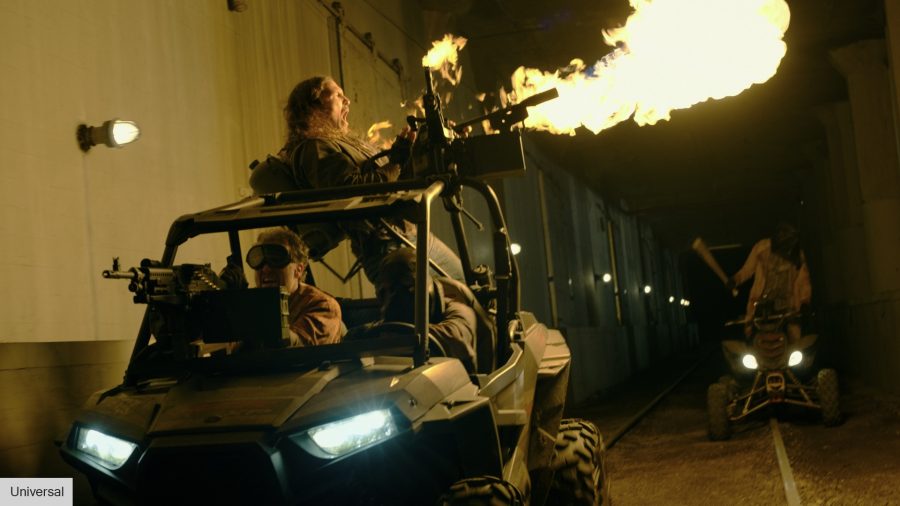 As its name suggests, The Forever Purge shows the holiday evolving into a way of life in America. Finally, we have reached the point when after that 12-hour buzzer rings, the violence continues. Yep, we’re now at the point of no return in the franchise as carnage and mayhem completely consume the country. If you haven’t guessed already, the NFFA has been re-elected into office following the discourse of Election Year and have reinstated the holiday as a result.

Like always, white supremacists and sadistic serial killers wearing elaborate masks joyfully take to the streets. However, these extremists decide to keep their killing spree going to ‘cleanse the country’ once and for all. Basically, the racists have gone wild, and every sane person left in America begins to flee to the border. It isn’t about surviving 12-hours anymore; it is about surviving America itself, which has jumped off the deep end into hard division and brutal violence.

Seeing people purge in the daylight and the holiday wholly exposed as the corrupt practice that caters to Nazis and those in power (which it has always been) completely changes the franchise for good. Finally, the beast of a holiday has reached its ultimate form, and the country begins to implode in on itself.

How to watch the Purge movies in release order:

The Purge
Horror Movies
Read next 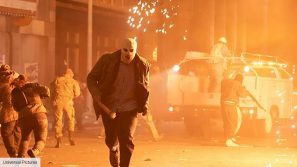