Currently, we are in the golden age of cinematic universes. From the MCU to the wizarding world of Harry Potter, there are plenty of timelines for cinephiles to sink their teeth into. However, none are as spooky or as scarily fun as The Conjuring horror movies or their connecting stories filled with demons, ghouls, and jump scares. But with eight films in the franchise so far, and none released chronologically, you may be left wondering how to watch The Conjuring movies in order?

Kicking off with the 2013 ghost movie, The Conjuring, from genre veteran James Wan, The Conjuring Universe has become a cultural phenomenon and is a ghost lover’s bread and butter. Based on the real-life cases from paranormal investigators Ed and Lorraine Warren, played by Patrick Wilson and Vera Famiga, the movies consist of three main instalments and four spin-offs, all that lead into each other to build up some quality scary lore. However, as we mentioned before, all the release dates of the entries to the Conjuring Universe aren’t chronological, and only three movies are officially numbered.

If you are like us here at The Digital Fix and honour sacred cinematic timelines, this makes figuring out how to watch all The Conjuring movies a bit mind-boggling, to say the least. Keeping that in mind, we’ve decided to create a guide for all your scream-inducing convenience. Here is the chronological list of The Conjuring movies and the best order to watch them in – warning, minor spoilers ahead.

How to watch The Conjuring movies in chronological order? 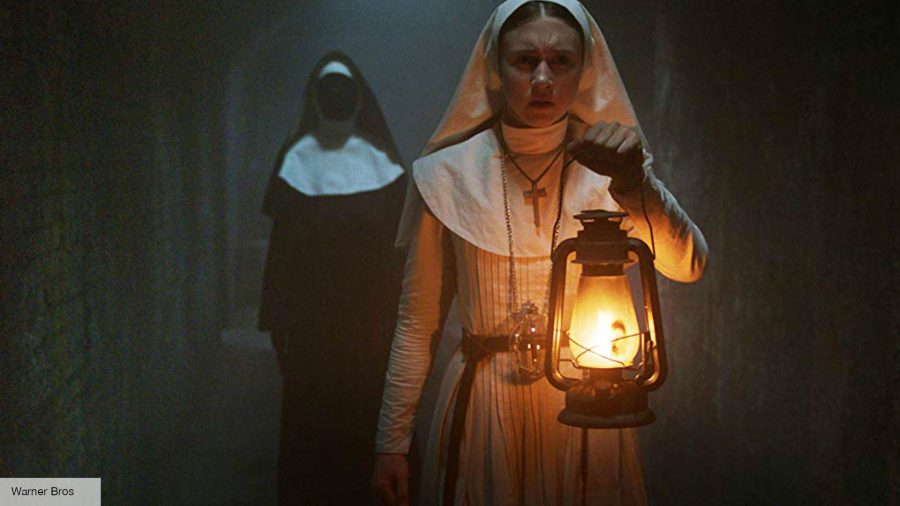 Set in 1952, here is where all the otherworldly evil begins, and where the context for the Warrens’ long-standing battle against a specific nun looking demon is at. The film follows the story of Father Burke and Sister Irene, who set off to investigate a Romanian monastery after a nun kills herself. Well, surprise, the holy ground isn’t that holy, and we learn the backstory about a gateway to hell that was opened during the dark ages. 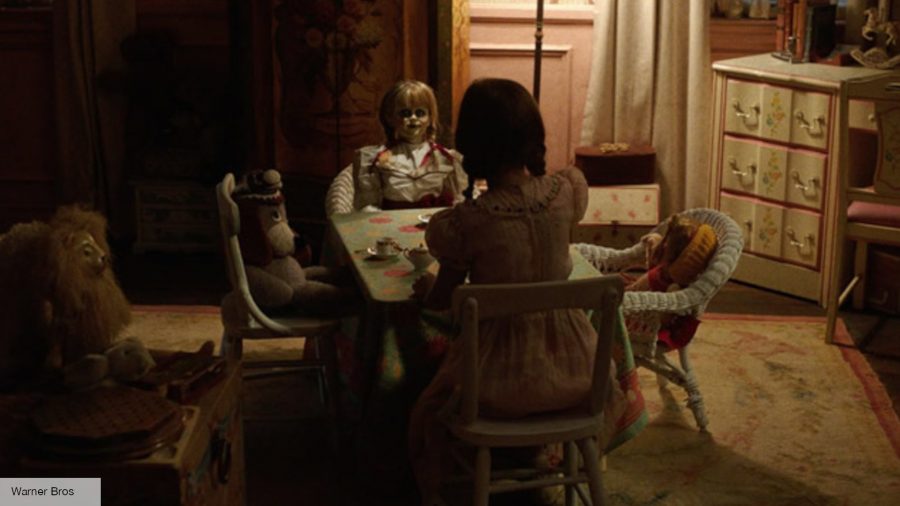 Annabelle: Creation is set just three years after we saw Valak supposedly getting owned in The Nun and sent back to hell (emphasis on supposedly). This spin-off acts as a prequel to both The Conjuring and another Conjuring spin-off, Annabelle. For those who don’t know, Annabelle is probably one of the most famous demonic dolls in pop culture, and here is where we learn how she came to be.
After losing their seven-year-old daughter in a car crash, a dollmaker and his wife create everyone’s favourite creepy porcelain toy who ends up becoming the shell for a powerful demon.

After the couple opens their home to a nun and a handful of orphans, some terrifying haunts ensue, and one of the children, Janice, gets taken in by the powers of darkness. At the end of the movie, we see Janice now adopted by the Higgins family and going under the name Annabelle, lining up the events perfectly for the next film in the timeline. We also see a familiar creepy Nun return – since surprise Valak is still kicking. 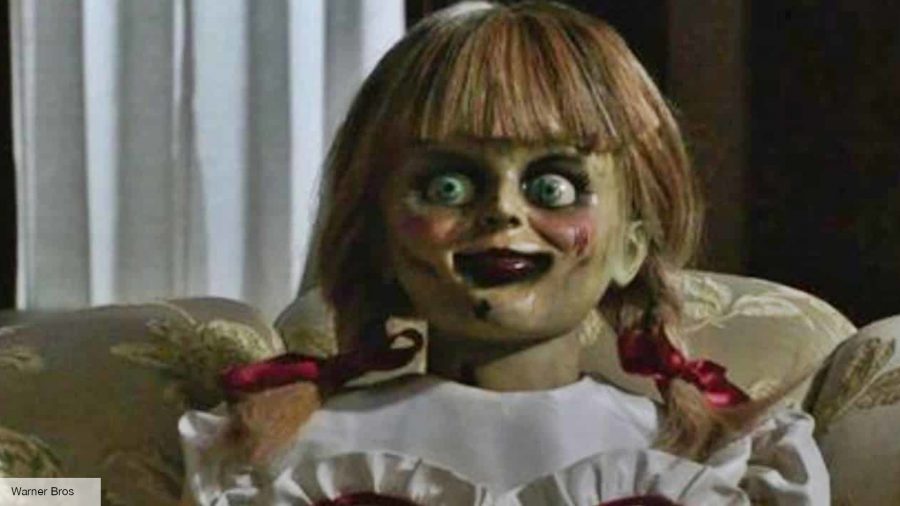 Now that we know how the creepy doll came to be, Annabelle makes a lot more sense, as in many ways, this Conjuring spin-off throws you into the supernatural deep end. Set in 1961, we see a young couple getting ready for their newborn, by decorating their nursery with spooky dolls (gotta love that horror logic) and guess who gets added to their collection. We also learn what happened to Janice. Without giving too much away, let’s just say, one murder lead to another and long story short the demon was transferred back into the Annabelle doll.

So, as you can expect, the new couple is soon terrorised by the possessed plaything. We are also introduced to Father Perez (remember that name), who comes to exorcise the doll in this film. After some hectic spooks, Annabelle ends up in a pawn shop. However, when the doll is bought as a gift for a nursing student, the young girl calls the Warrens – fully introducing us to the Conjuring-verse’s main protagonists. 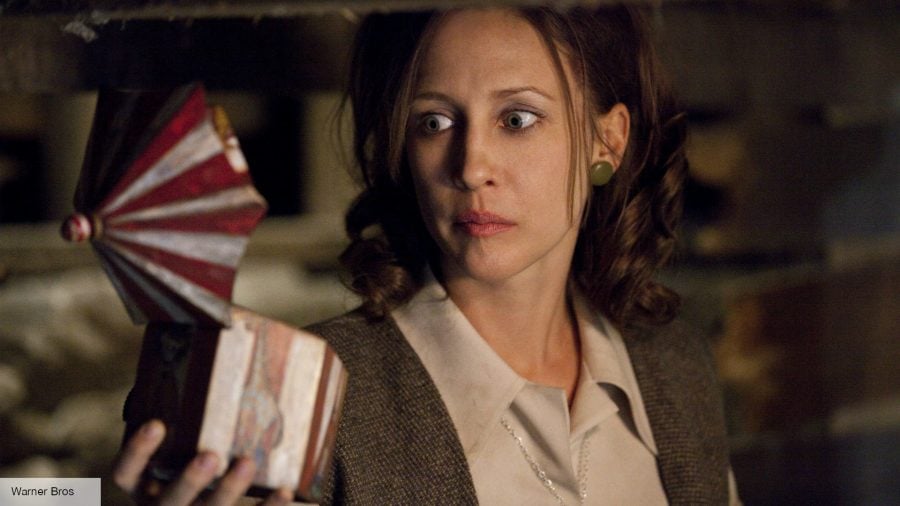 And now, finally, we get the movie that started it all. Arguably one of, if not the best, films in the franchise so far, The Conjuring is next on the timeline. Set in 1971, the movie opens with Maurice, who we mentioned back in The Nun entry. Lorraine sees a graphic vision during his exorcism where her husband dies via an enormous wooden stake through the chest. Understandably she is a bit spooked and isolates herself for a few days. Ed is worried about his wife taking on any cases, but spooky duty calls once again in true horror movie fashion.

Back from the dead: The best zombie movies

The duo is asked to investigate a haunted house, which is revealed to be on cursed land and the hunting ground for a vicious witch. With plenty of scares, and quality tension, the movie is a class A haunt. At the end of the flick, the couple learns about some spooky events that refer to the real-life Amityville Horror case, and we are ready to dive into The Conjuring 2 – well, almost. 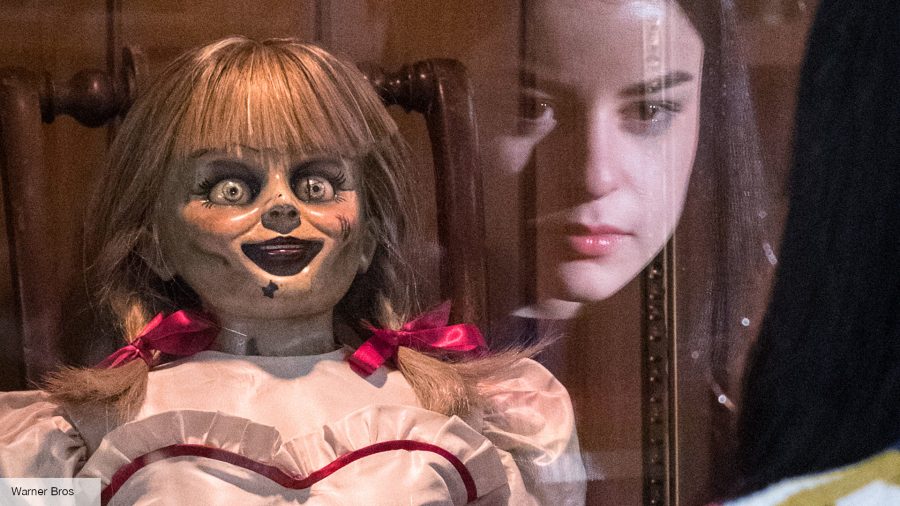 It turns out the specific call that we saw at the end of The Conjuring won’t actually be investigated for another five years – no cinematic timeline is without a couple of logical hiccups, right? The Warrens decide to travel to investigate another case, and leave their clairvoyant daughter behind with babysitter Mary, and the possessed demon toy Annabelle, who is now sitting in a glass case amongst the rest of the Warren’s oddities.

Mary’s friend ends up opening said glass case, and next thing you know, we see plenty of ghosts, including a bride wandering around, which subtly foreshadows the next movie on our timeline. To stop all the evil spirits from causing a muck, they must seal Annabelle away again. But as we all know by now, is the evil ever really contained? Glass case or not. 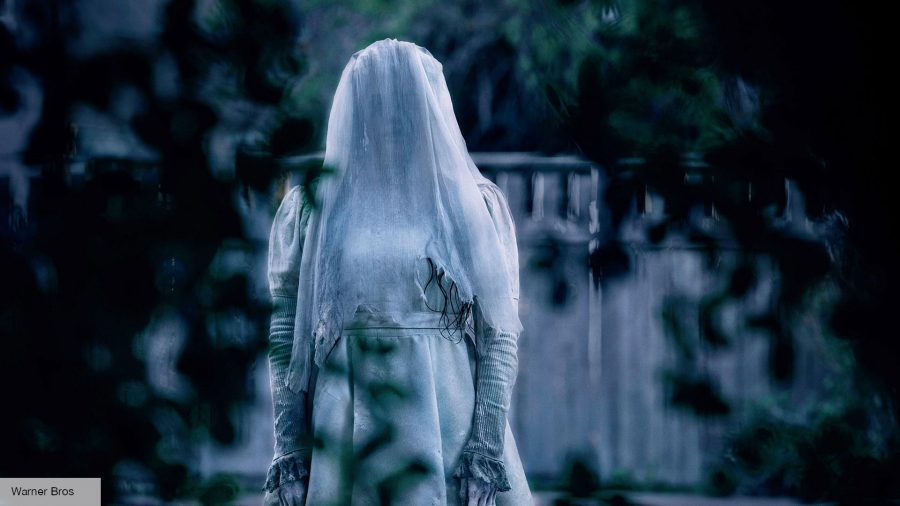 Moving away from porcelain toys and back to some good old fashioned murderous ghosts, The Curse of La Llorona is the flick that really starts to tie the Conjuring universe together. Based on the folktale, The Weeping Woman, the story features a bridal looking ghost who drowned her two children. Set in 1973, we follow Anna Tate-Garcia, a caseworker who investigates a mother of two who has seemingly lost her marbles, trapping her traumatised sons in a closet. Needless to say, this kick starts some killer haunting from none-other than the 300-year-old ghost La Llorona.

Once her own children are put into danger, Garcia enlists the help of Father Perez, who we were previously introduced to back in Annabelle. Here we are given more context to the character. Although this conjuring spin-off doesn’t feature the Warrens, seeing Father Perez again, hints that we might see him and the couple team up in a future instalment. 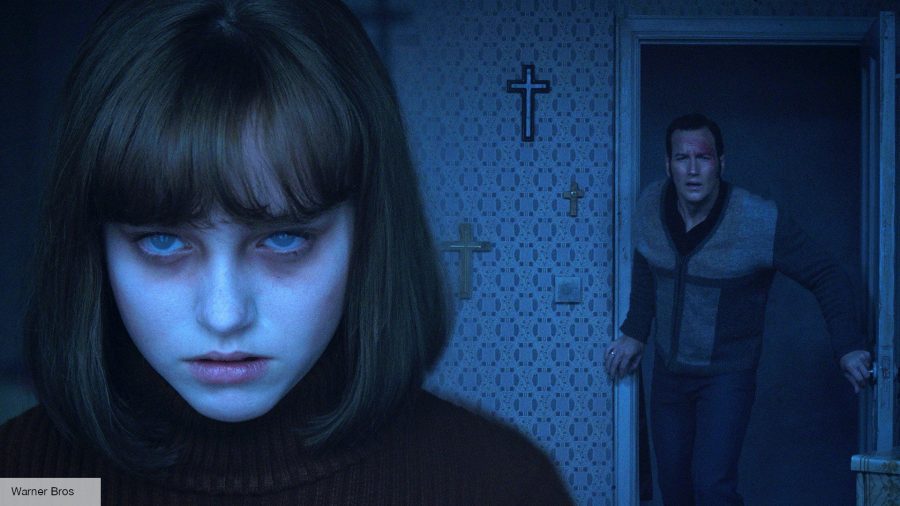 We are back to following our favourite investigators, the Warrens. The movie begins with the couple now finally investigating the supernatural disturbance mentioned at the end of the first Conjuring movie, the infamous Amityville murders. While there, Lorraine sees the same vision of Ed dying; this time, however, Valak, our resident evil nun, makes an appearance as well.

A year after the vision, the couple and the demon decide to take a trip across the pond, and the main events of The Conjuring 2 begin to kick off. Set in England in 1977, a single mother and her family are being terrorised by the ghost of a grumpy old man, Bill Wilkins, who wants the living tenants out of the home. The Warrens take the case, and we get to see them face off against Valak on international ground. 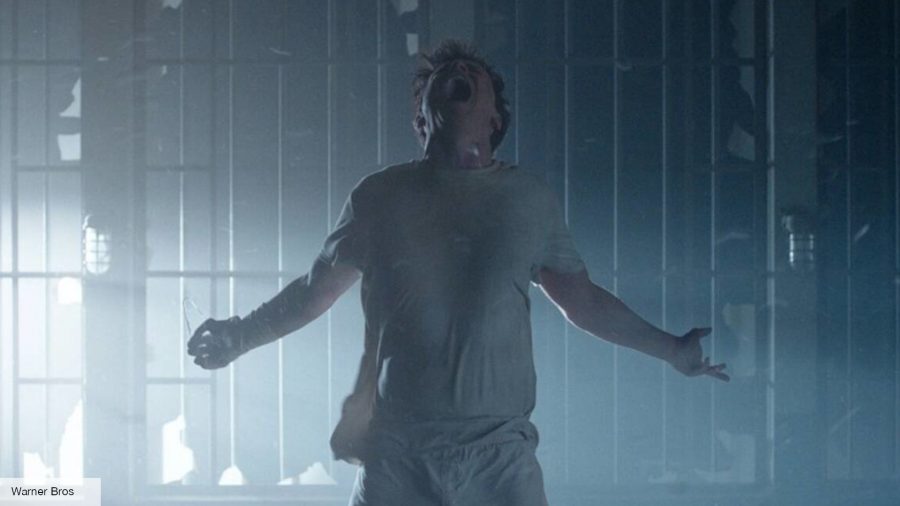 Innocent until proven possessed, am I right? Finally, the conjuring movies have made it to the ‘80s, and the law meets the world of the paranormal. Like most of the Conjuring films, this movie draws on real-life cases of the Warren couple, and is based on the trial of Arne Cheyenne Johnson, the first murder trial where a defendant claimed demonic possession.

Back in the day: The best ’80s movies

Although the movie isn’t as refined as the first two Conjuring flicks, the film shows an exciting progression in the conjuring universe. We see Lorraine being deeply affected by the nefarious entity, showing that our protagonists aren’t above being manipulated or even possessed. The Conjuring: The Devil Made Me Do It is out now on Digital Platforms and on 4K UHD, Blu-ray and DVD.

And there you have it, all the current Conjuring movies in order. If you want to watch the movies by release date, here is the alternate order below. 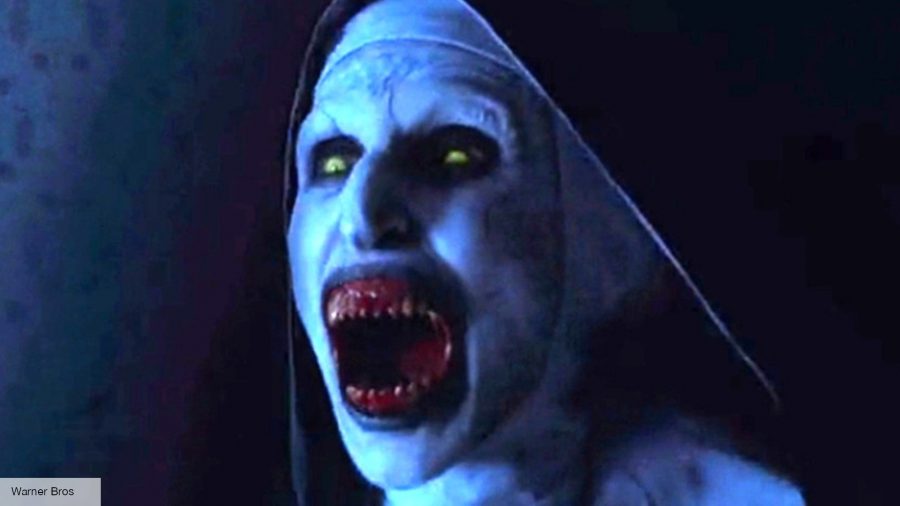 How to watch The Conjuring movies in release order:

If you are interested in more timelines, here are our lists of how to watch the Batman movies and Fast and Furious movies in order. 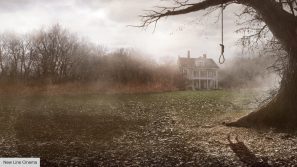