The fourth instalment of the hit dystopian franchise, The Matrix, officially has a name. Collider reports that during CinemaCon, Warner Bros shared an exclusive trailer for The Matrix 4, which revealed that the upcoming science fiction movie is now titled The Matrix: Resurrections.

This will be the first Matrix movie since 2003’s The Matrix Revolutions, which served as the end of the franchise on the big screen. The 2000s movie concluded the tragic virtual reality narrative, and rounded off Neo and Trinity’s story about mankind’s resistance against the oppressive machines. However, the short clip of the movie’s trailer shown at CinemaCon revealed that the sci-fi story is far from over, and featured Neo and Trinity meeting once again.

Little is known about the new Matrix movie, with plot details still being kept under wraps. However, we do have some intel about the upcoming flick. The Matrix: Resurrections is directed and co-written by Lana Wachowski, who worked alongside Aleksandar Hemon, and David Mitchell to pen the new movie. Lilly Wachowski, who co-wrote and co-directed the first three action movies in the futuristic series, will not be involved this time round.

We also know the cast line-up for the movie, which fans will be happy to hear includes some fresh and familiar faces. Keanu Reeves is returning as Neo, and Carrie-Anne Moss will take on the role of Trinity once again. Jada Pinkett Smith is set to play Niobe, Lambert Wilson will be The Merovingian, and Daniel Bernhardt is back as the hostel AI, Agent Johnson. Some new cast members are Yahya Abdul-Mateen, Neil Patrick Harris, Max Reimelt, and Christina Ricci.

Currently, there isn’t a date for any expected trailer release – unfortunately, the sneak peek was for CinemaCon attendees only. If you are itching for some more info on upcoming releases, Ghostbusters: Afterlife had its first screening at CinemaCon. First reactions to the spooky film promise a top tier ghost movie.

Hopefully, Warner Bros’ trailer teaser points to more Matrix 4 updates coming soon. Until then, we will just have to wait patiently. The Matrix: Resurrections is scheduled to release on December 22, in both theatres, and on the streaming service HBO Max. 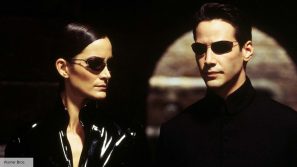