It’s time to honour cinema’s dearly departed by looking over the best ghost movies of all time. That’s right, we here at The Digital Fix have our Ouija boards at the ready and have summoned the top ghoulish picks that this horror sub-genre has to offer – bringing you the essential phantom flicks, which are guaranteed to haunt your dreams.

Ghosts have been a common fixture in entertainment for centuries, and are an entity that spans across many different genres – and it’s easy to see why. Stories about lost souls returning to haunt us, tap into the universal fear of death, and the terrifying question of what happens to us after we die? It is a fascinating concept that can be used to tell just about any story, be it comedy, romance, and of course, horror. We’ve decided it is time to tackle this massive sub-genre, and have done some top-tier paranormal investigating, collecting all the supernatural cinematic readings that would make any Ghostbuster jealous.

Be it haunted houses, chillers, psychological thrillers, or just some macabre fun, we’ve made sure to include a film for everyone. So if you’re ready to face some apparitions and aren’t too scared of the odd possession, here is our list of the best ghost movies that you can watch right now.

What are the best ghost movies? 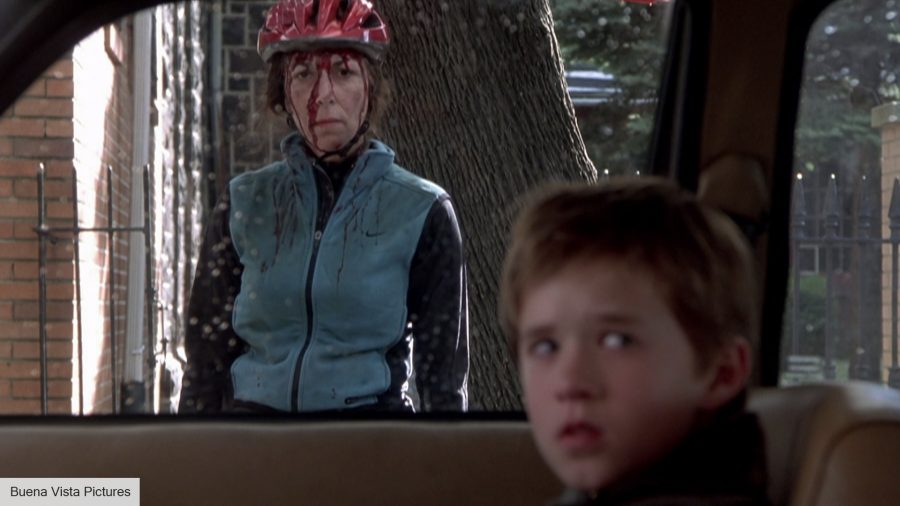 Remember when “I see dead people” was the most quoted line in cinema? Well, it’s all thanks to M. Night Shyamalan’s cultural phenomenon, The Sixth Sense. A psychological supernatural thriller, the movie is horrifying, sports some amazing writing, gorgeous cinematography, and has one of the most famous twist endings ever. The movie follows a child psychologist (Bruce Willis) who’s trying to atone for his past, The Sixth Sense revolves around his efforts to help a young boy (Haley Joel Osment), who is tortured by his uncanny ability to see dead people.

The Oscar-nominated movie is packed with supernatural spirits and shows how your past can haunt you in more ways than one. As the story unfolds, we see the downward spiral of all the characters, who become consumed with an overwhelming sense of loss and regret. If you are looking for a fright, some top-tier acting, or just a great ghost story in general, The Sixth Sense is a must-watch. 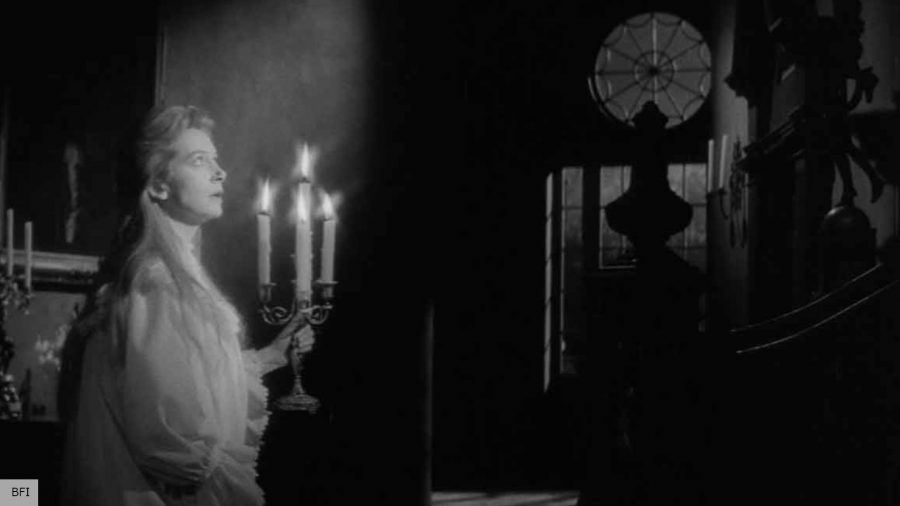 Based on the 1898 novella, The Turn of the Screw, The Innocents is one of the best psychological horrors you can watch. It perfectly embodies the saying, “your mind is just playing tricks on you”, showing us a haunting, without ever telling us if what we are seeing is real or if it is all just simply in the main character’s imagination. The Innocents follows a Miss Gidden (Deborah Kerr), a governess who becomes convinced the two children she’s been charged with looking after are actually possessed by nefarious spirits.

By constantly making us question Gidden’s sanity, tension is built up to the extreme, and perfectly crafted ambiguity keeps you engaged throughout the entire film. The Innocents is an incredibly clever ghost movie that does an excellent job at putting you in Gidden’s shoes, making you question your own perceptions of the supernatural while also dragging you into a chilling mystery. 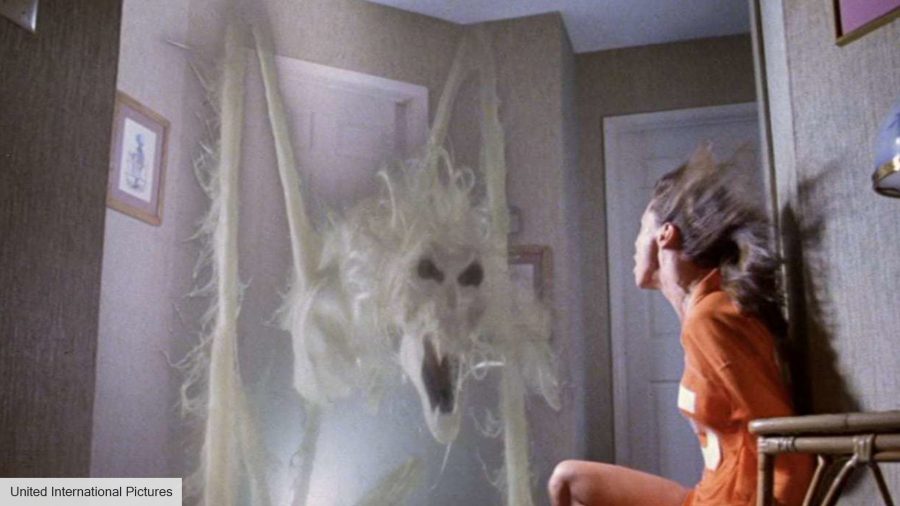 Directed by Tobe Hooper (Texas Chainsaw Massacre) and produced by Steven Spielberg, you can’t talk about Hollywood hauntings without mentioning the American spooky classic Poltergeist. With its eerie atmosphere and fun story, the film was nominated for three Academy Awards in the year of its release, and to this day, the movie still has one of the creepiest doll scenes we have ever seen – sorry Annabelle, but you just can’t beat possessed clowns.

One day a family finds themselves facing weird anomalies throughout their home, and supernatural danger ensues. From rearranging furniture to a television communicating with a little girl, this blockbuster has it all. Although Hooper (generally known for darker and gorier projects) directed the film, there is a fun, light-hearted Spielberg-ness to Poltergeist, with humour sprinkled in-between all the unsettling scenes. While perhaps it isn’t the scariest ghost movie around, no one can deny that Poltergeist is always enjoyable, and stands as a class A film. 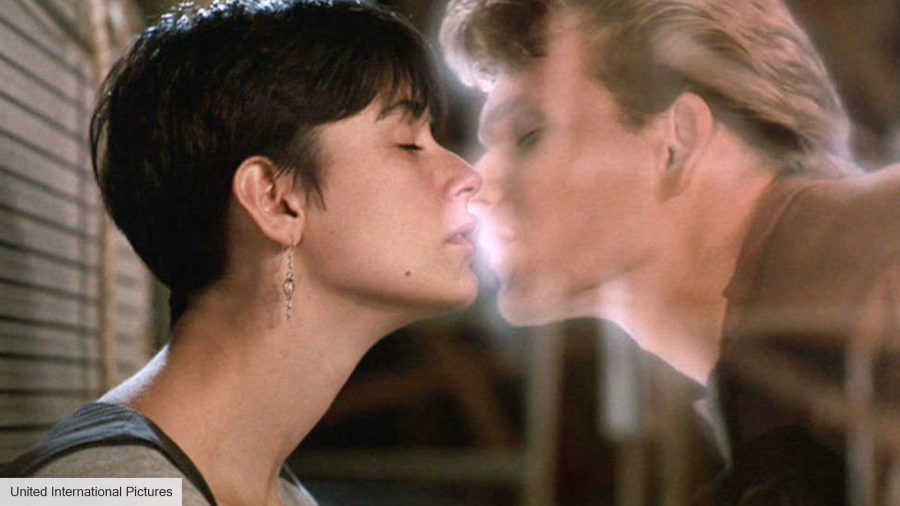 Patrick Swayze and Demi Moore prove that love never dies in the romantic movie Ghost. One of Jerry Zucker’s (Airplane!) most serious films to date, the movie follows a man (Swayze) who dies after a sudden mugging. However, he isn’t ready for the afterlife just yet, especially after learning about a conspiracy that still threatens his very alive girlfriend (Moore). Although most people associate this film with pottery montages, or Whoopi Goldberg’s comedic genius, Ghost stands as a solid chiller in its own right.

The iconic movie tells a gripping story of Swayze desperately trying to find ways to communicate with the living and constantly attempts to help the love of his now-deceased life. Full of tension and sporting a touching love story too, Ghost was the highest-grossing movie of 1990 for a reason. It also won the Academy Awards for Best Original Screenplay and Best Supporting Actress (Whoopi Goldberg), cementing its place in cinematic history. 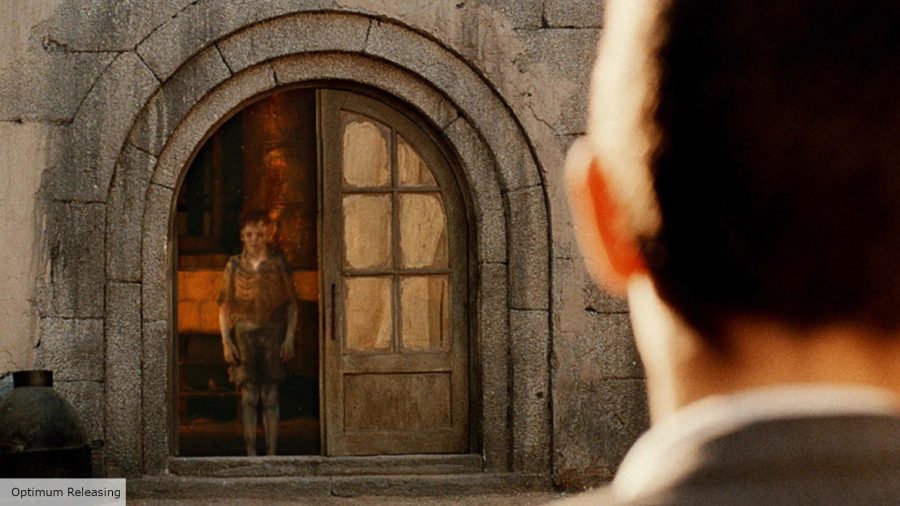 The Devil’s Backbone is an unsettling masterpiece from award-winning director Guillermo del Toro. We usually see hauntings set in the modern-day, and we rarely see historically focused phantom films like we do here. Set in 1939, during the final year of the Spanish Civil War, this gothic film offers the perfect blend of supernatural fantasy with real-life history leading to a fresh take on a ghost story that is bloody terrifying.

Set primarily in an orphanage, with a giant unexploded bomb in its courtyard, The Devil’s Backbone follows a young boy whose father was killed in the civil war. Upon arriving at the school, the young lad realises that the tall walls of his new home hold a dark past and is full of spirits trying desperately to communicate with him. One of Guillermo del Toro’s most underappreciated films, The Devil’s Backbone has a dynamic atmosphere, is an excellent anti-fascist piece of art, and touches on the very sad concept of sudden death, and deceased souls who need closure. 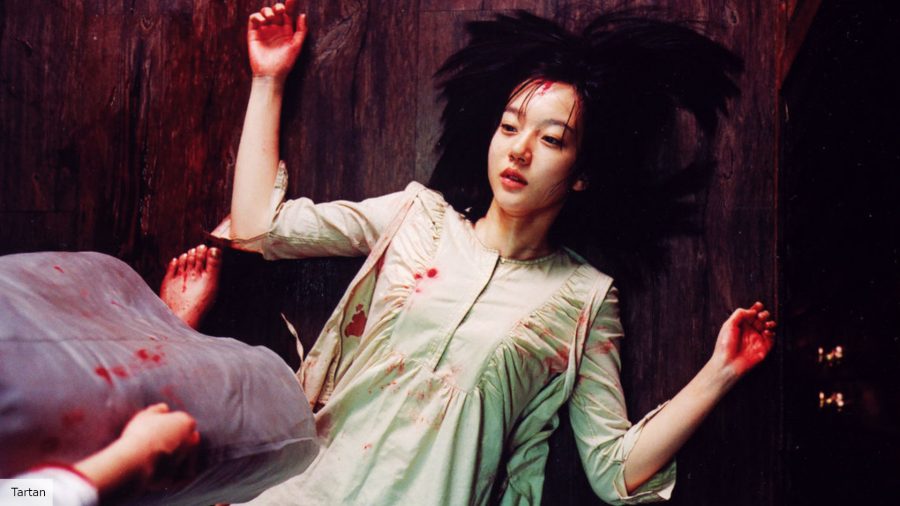 Despite the huge amount of incredible Asian horrors out there, the South Korean chiller, A Tale of Two Sisters, takes the crown when it comes to unsettling ghouls. Inspired by a folktale from the Joseon Dynasty era, the film was the first South Korean picture to be screened in American theatres, and still stands as the highest-grossing Korean horror movie to this day. The movie opens with two sisters, who, after being released from a mental institution, move to the countryside to stay with their father and cold stepmother.

However, once they return, strange things start to happen in the house. The movie is a slow burn that builds horror through its character dynamics and big plot reveals that are designed to unsettle the viewer. There is also a constant sense of foreboding and a suffocating atmosphere, keeping you on the edge of your seat. A Tale of Two Sisters is a cerebral story, and one of the most atmospheric ghost movies, period. 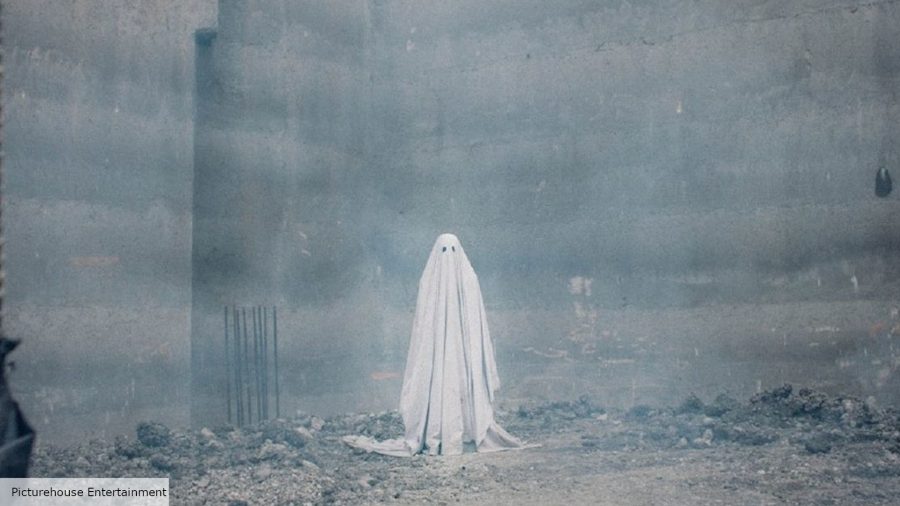 A Ghost Story is an existential drama centred around a musician who dies and turns into (drumroll please) a ghost. However, he doesn’t become a creepy Conjuring kind of apparition. No,refreshingly he looks like he’s wearing a children’s Halloween costume, which adds to the beautiful simplicity of this movie. Death is sad and A Ghost Story shows that through an emotionally impactful script and striking visuals that’ll shake you to your core.

The movie deals with themes surrounding loss, and questioning the meaning of life directly. Written and directed by David Lowery (The Green Knight), we see a ghost watch his past, present and future, confronting his life while also trying to find something that’ll help him move on. A highly original take on the sub-genre, the movie is packed with beautiful visuals, is full of sincerity, and is a quiet emotional journey that’ll stick in your mind for years to come. 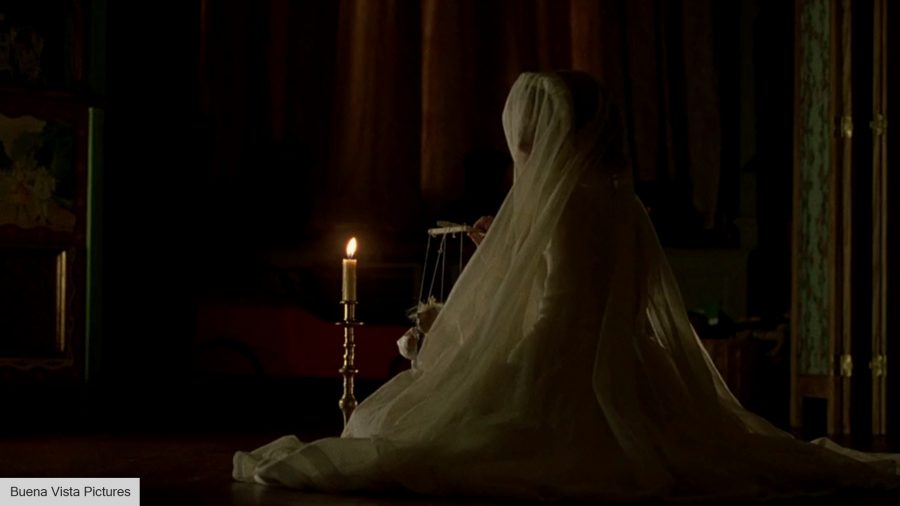 Written and directed by Alejandro Amenabar, The Others is a gothic thriller that’ll have you jumping at the slightest sound when walking about the house. Set in 1945, Nicole Kidman plays a mother of two children who are afflicted with photosensitivity, making them averse to light. After hiring three new servants to help keep her Victorian home perpetually dark, strange events begin to occur, and Kidman and her kids soon realise that they aren’t the only ones ‘living’ in the old house.

The acting is phenomenal and the film is visually stunning. From foggy outdoor scenes to dimly lit rooms, the cinematography is perfectly moody. The horror movie also has a fantastic twist, subverting the typical haunted house formula with its ending. All in all, The Others is an enjoyable spooky flick that is near impossible not to love. 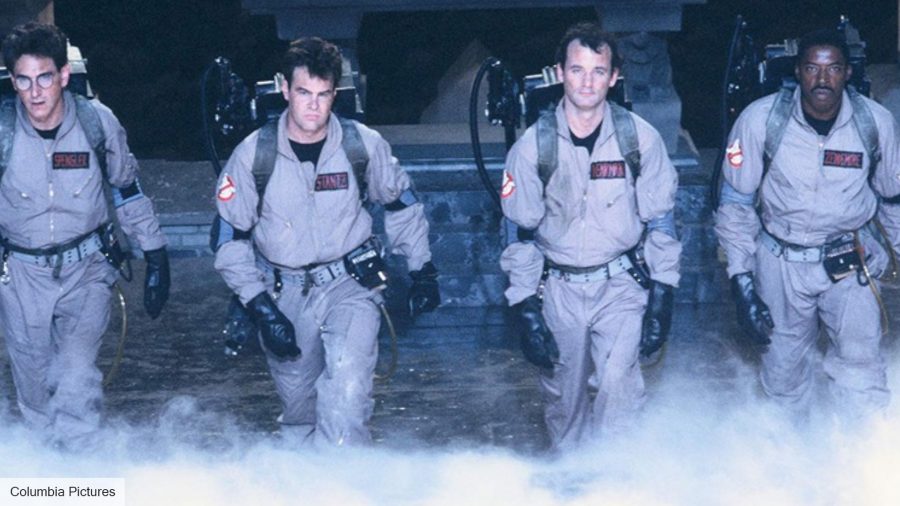 When you’re looking for the best ghost comedy, who are you gonna call? As we get ready for the new movie Ghostbusters: Afterlife, it’s time to honour one of the best movies of all time, the quirky supernatural 1984 classic, Ghostbusters. Written by Dan Aykroyd and Harold Ramis, the movie follows a gang of fired professors, who set up a paranormal investigation service in New York. They get commissioned by Dana, a haunted musician whose fridge has turned into a gateway to another dimension.

Starring Bill Murray, Dan Aykroyd, Sigourney Weaver, Harold Ramis, and Rick Moranis, the film is a hotpot of comedic talent, with some of the best ensemble work to be seen. The cast performs together perfectly, embodying the movie’s fun script that has just the right amount of laughs, horror elements, and even a touch of fantasy to capture all our spooky imaginations. A film near and dear to all of us here at The Digital Fix, Ghostbusters is a timeless flick and a ghost movie for any occasion – all hail Zuul. 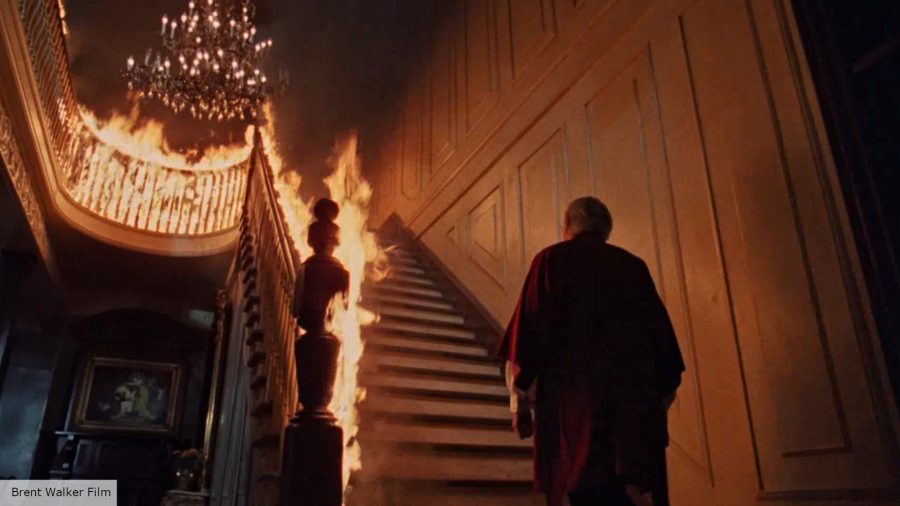 A slow-burn cult classic, Peter Medak’s The Changeling, is one of the most loved ghost films of all time. Ghost movies usually consist of a family unit, and rarely do you find a single person facing off against spectres in their home all by themselves. After the sudden deaths of his wife and daughter, a composer rents an eerie Victorian mansion, trying to escape his past – however, things don’t really work out that way.

Not long after moving, strange phenomena become the norm, and some creepy supernatural goings-on occur. The Changeling is unquestionably terrifying, embodying everything that makes the concept of ghosts and hauntings horrific. The Changeling is straight nightmare fuel, and keeps you on the edge of your seat as you wait for something to jump out of the shadows. The camera work also has a voyeuristic quality, as if we are witnessing the movie through the eyes of the ghost stalking its prey – making you cower in suspense until the credits start to roll.

And there you have it, ghouls, gals, and phantom pals, the best ghost movies of all time. If you are in the mood for more scares, check out our list of the best monster movies. 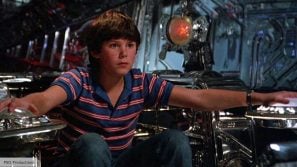