Paramount has shaken up its release schedule for next year. Per Collider, the next Transformers movie, and the latest Star Trek film, have both received significant delays.

Transformers: Rise of the Beasts is most affected, moving almost an entire year. The action movie sequel was set to come out June 24, 2022, but now it’s going to release June 9, 2023. The currently untitled new Star Trek, meanwhile, has been pushed back six months, from June 9, 2023, to December 23, 2023. Between them, Transformers is a slightly more surprising shift, as the science fiction movie completed filming in October.

Steven Caple Jr is directing the new flick about the robots in disguise, and this time the battle between Autobots and Decepticons takes place in New York City in 1994. Anthony Ramos and Dominique Fishback are starring in the lead roles, as archaeologists who uncover some alien technology that places them in the middle of an ancient war. Ramos previously had a role in musical movie In The Heights, while Fishback was involved with drama movie Judas and the Black Messiah.

Rise of the Machines will introduce the Maximals, the Predacons, and the Terrorcons of Beast Wars: Transformers to the franchise. Ron Perlman is confirmed to be voicing Optimus Primal, the lead Maximal, not to be confused with Optimus Prime, head of the Audobots, who’s once again being voiced by Peter Cullen.

For the new Star Trek, we know very little. WandaVision director Matt Shakman is helming production, with Lindsey Beer and Geneva Robertson-Dworet writing the script. No cast or plot details have been announced, making its shift more understandable.

In the meantime, check out our list of the best sci-fi series for more new life, and new civilisations to seek out. 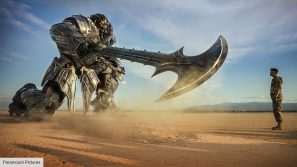 Transformers: The Last Knight has been watched over eight million times on Netflix
Get involved Continue the conversation over on The Digital Fix Forum