It looks like we may have another Hollywood A-lister feud on our hands. While promoting the new Netflix action movie Red Notice, Dwayne Johnson took to social media to jokingly tease one of his co-stars – Ryan Reynolds.

Posting to Twitter, Johnson shared a picture of an edited billboard which, in giant bold letters, said, “Ryan Reynold uses his mom’s Netflix account.” Along with the light-hearted snap, Johnson challenged Reynolds “to beat that” before clarifying that Reynolds’ mother is a class act. “For the record, Ryan’s mama is an AMAZING WOMAN,” the star captioned the post. “Not sure why Ryan turned out the way he did.” In response to Johnson’s social media banter, Reynolds responded by re-sharing the post, writing: “In fairness, my mom uses my OnlyFans account.”

Both Reynolds and Johnson are familiar with celebrity feuds. Reynolds is in a long-term (and hilarious) back and forth with fellow X-Men alumni Hugh Jackman. On the other hand, Johnson has been involved in a less friendly feud with Fast and Furious co-star Vin Diesel. Luckily, the recent exchange between Reynolds and Johnson seems to be on the friendlier feud side, and reads like a charming bit of teasing between mates as they promote their new movie.

Besides Reynolds’ brief cameo in the Fast and Furious spin-off Hobbs and Shaw, Red Notice marks the first big collaboration between the stars. The two actors appear alongside Gal Gadot, of DCEU fame, in the globetrotting heist comedy movie.

In fairness, my mom uses my OnlyFans account. https://t.co/ckUds2aT0b

While it is unclear if this new “feud” will continue, if it does, it would help promote both actors’ careers as well as provide fans with a few more laughs. While we wait for the next hit on social media to come, viewers can look forward to Red Notice, which hits the streaming service Netflix on November 12. 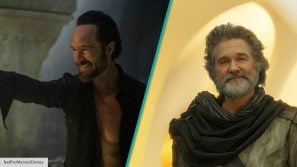