It’s all aboard the hype train as Chloé Zhao’s Eternals delivers another epic entry in the Marvel Cinematic Universe. While Phase 4 of the MCU has/will revisit old favourites like Doctor Strange, Black Widow, and Spider-Man, the world’s highest-grossing franchise is also introducing a new breed of heroes – with Eternals introducing no less than ten new heroes.

Alongside Simu Liu’s Shang-Chi, Iman Vellani’s Kamala Khan, and Oscar Isaac’s Moon Knight, Eternals delivers an A-list cast unlike any we’ve seen. With the likes of Anjelina Jolie, Gemma Chan, and Salma Hayek, there’s a Game of Thrones reunion with Kit Harrington and Richard Madden. Much more than just an origin movie for these time-defying superbeings, Eternals leans into the more cosmic branch of the MCU.

As with any MCU movie, it’s important to keep your eyes and ears peeled for what you could’ve missed. With the characters having appeared in Marvel Comics since 1976, there’s plenty of lore to explore. Added to this, there are the usual post-credits scenes and references to a much wider world. If you’re ready, here are all of the Eternals Easter eggs you might’ve missed.

One of the main players in Eternals is Gemma Chan’s Sesi. Her love story with Ikaris is one that transcends generations and forms a massive part of the science fiction movie’s plot. For those who think they recognise Chan, it’s not just because she’s popped in everything from Crazy Rich Asians to Humans.

Chan is one of the few famous faces to take two roles in the MCU. Alongside Alfre Woodard and Kenneth Choi, Chan is the latest to pull double duty. Heading back to 2018’s Captain Marvel, she played the villainous Minn-Erva. If Sersi and Carol Danvers meet, there could be a great opportunity for a joke, but for now, we’re supposed to pretend Chan is new to the MCU. 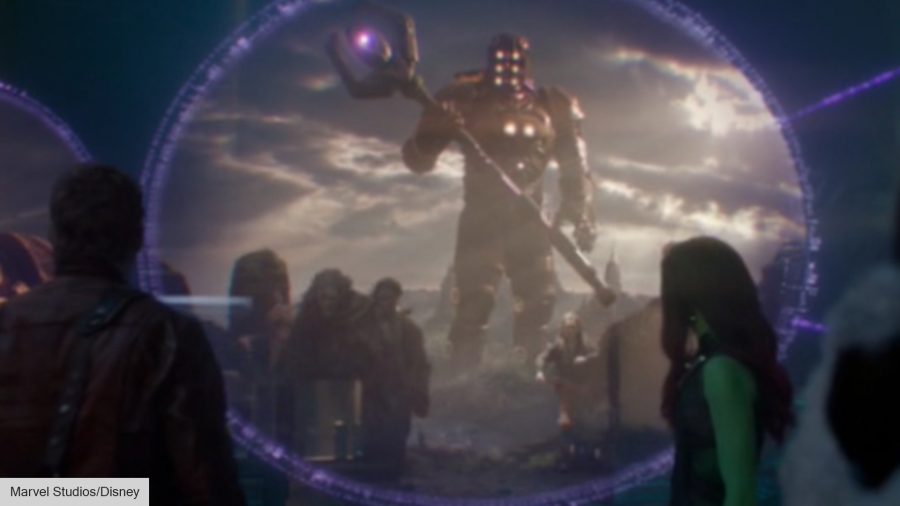 Daphne and the Celestials

Eternals gets up close and personal with the deities known as the Celestials. These towering gods are nothing new to the MCU, but until now, they’ve only featured via flashbacks or been deceased. Remember, Eson the Searcher destroyed an entire planet using the Power Stone, while the Collector’s base is in the severed head of a Celestial.

Before Eternals came out, there was a lot of debate about which of those colourful cosmic beings would appear. Arishem is the one pulling the strings, whereas it’s the legendary Tiamut who is killed before its time. Ironically, Arishem’s plan is taken directly from the 1999 Earth X miniseries. 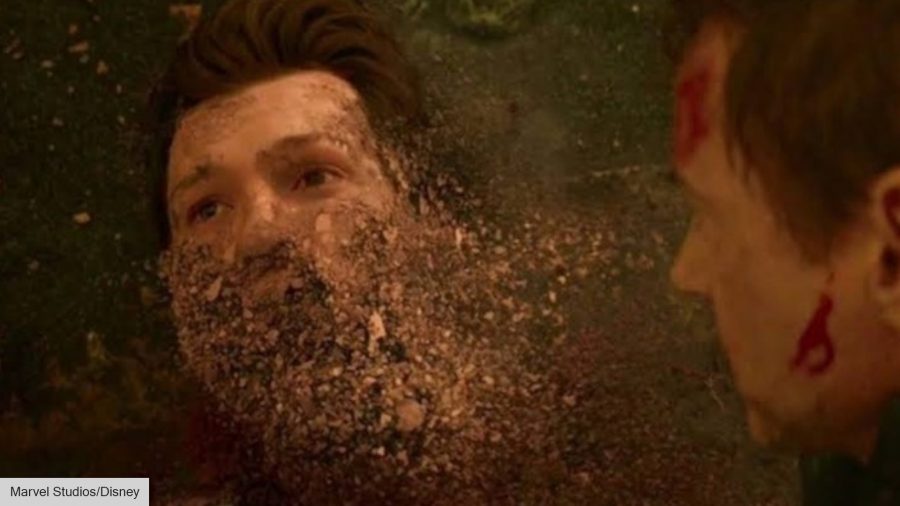 Remembering that Eternals takes place around eight months after Avengers: Endgame, the aftermath of Thanos’ snap is quite literally being felt. Hayek’s Ajak mentions half the population being dusted, with Thanos’ botched plan actually being part of what causes the Emergence.

If Thanos has succeeded, there wouldn’t have been enough humans to power the Emergence and let Tiamut be born. There are already those that think Thanos was right, and with the Blip stalling the Emergence, it paints the whole thing in a different light. 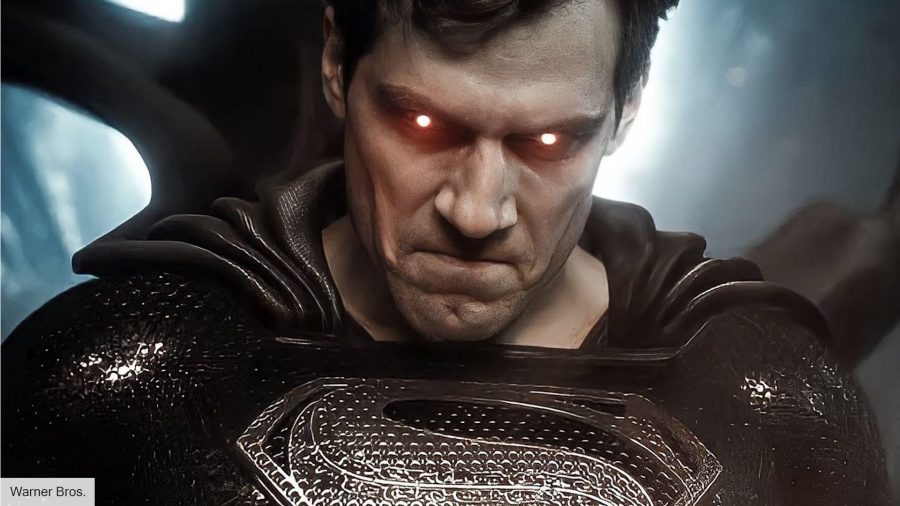 The worlds of Marvel and DC do their best to remain poles apart, and although it’s easy to imagine a crossover movie further down the line where Madden faces off against Henry Cavill, it’s not on the cards.

Eternals takes several pops at DC (comics not movies). As well as a joke that Kingo’s valet is a butler “like Alfred”, Ikaris is mistaken for a certain Man of Steel by Phastos’ son. Sure, both of them are muscular Adonises that shoot lasers from their eyes, but as Ikaris reminds us, he’s not a fan of capes. 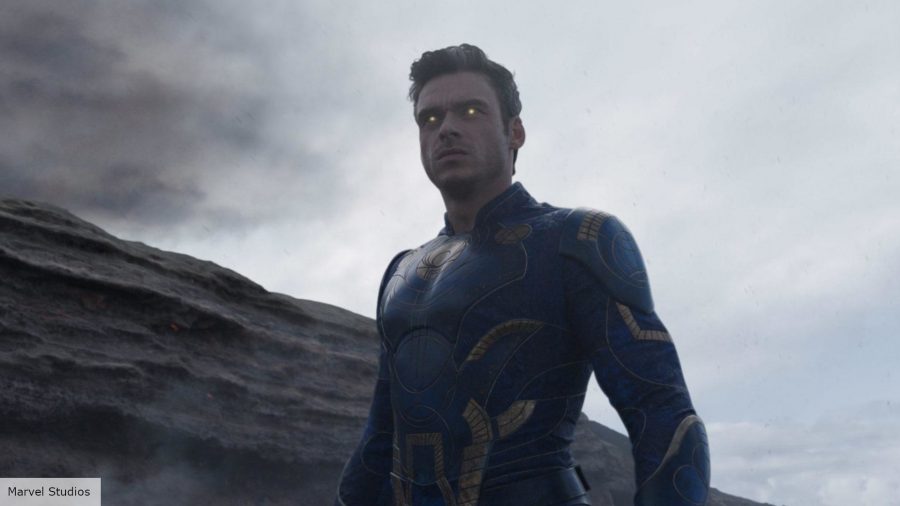 Don’t judge a book by its cover

There are plenty of bids to the Eternals comics, however, one of the run’s most iconic pieces of artwork is recreated by Madden’s Ikaris. It’s usually Druig who betrays the others, but here, it’s the heroic Ikaris who is the big bad.

It’s a bird it’s a plane! DCEU movies in order

When Ikaris escapes Phastos’ trap before Tiamut’s emergence, he spreads his arms wide and fires his laser eyes into the air. It’s a brilliant homage to the cover of Daniel Acuna’s Eternals #6 from 2009. 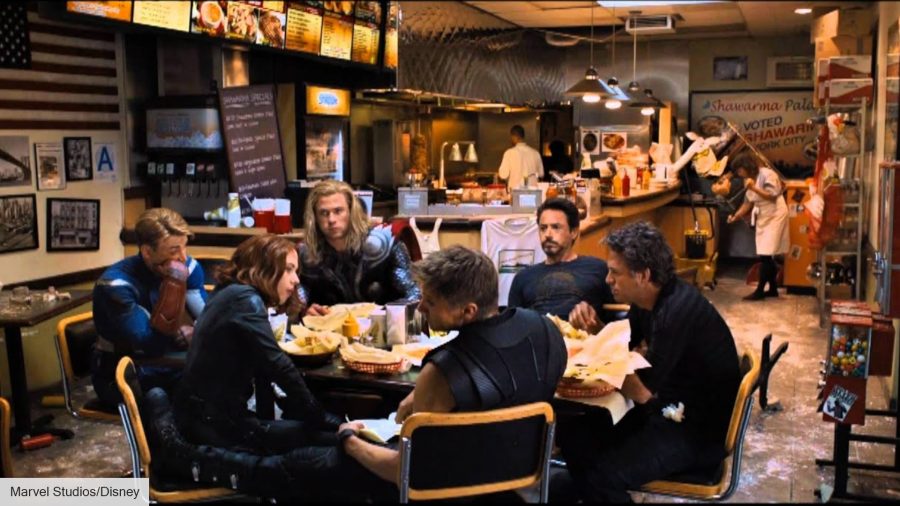 In terms of world-building Eternals makes it very clear the team has been watching from the sidelines. Although they’re infinitely more powerful than most of the Avengers, there are some definite parallels.

Visually, the scene of the Eternals tucking into Gilgamesh’s feast is a nod to The Avengers’ post-credits where Earth’s Mightiest Heroes enjoy some shawarma. Elsewhere, Captain America and Iron get a name-drop as dearly departed heroes. Kingo is clearly a fan of Steve Rogers, with Cap’s OG shield hanging on the wall of his plane.

Finally, Sersi is grilled on whether she’s a wizard like Doctor Strange when she comes out as a superhero. Given that Strange is tipped to head up the New Avengers, we’re left asking which Eternals will inevitably be joining him. 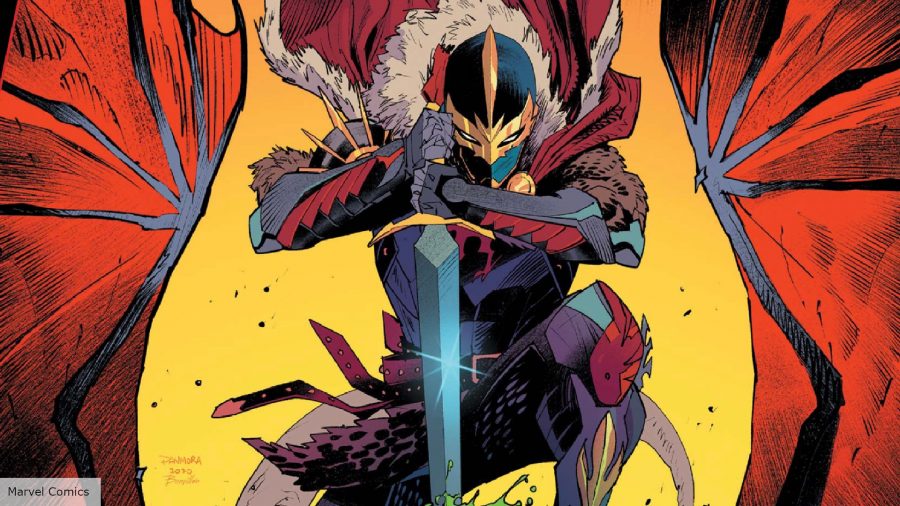 The legacy of the Black Knight

Even if Harington’s Dane Whitman doesn’t fully adopt the mantle of the Black Knight in Eternals, Zhao puts the pieces in place for his return. Before the movie was even released, Whitman was pitched as an MVP in the franchise’s future.

As well as his family crest appearing on the ring Sersi gives him, she appeals for Whitman to make up with his uncle. In the comics, Nathan Garrett was the second Black Knight, who handed over the namesake to Whitman on his deathbed.

The Ebony Blade (more on that in a minute) is a key piece of the Black Knight’s history, but in one scene, Jolie’s Thena picks up the mythical Excalibur on the Eternals’ ship. It’s yet another impressive weapon in the Black Knight’s arsenal of relics. 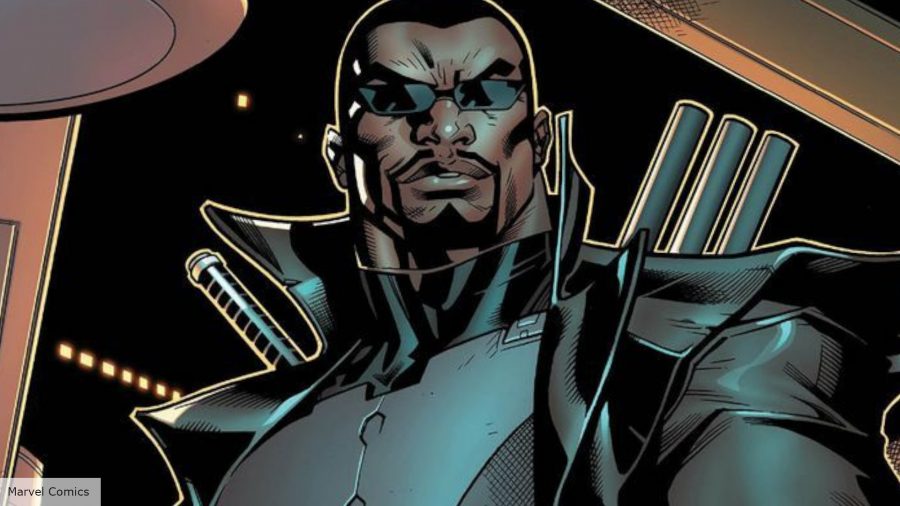 Two blades are better than one

No one expected Zhao to have the honour of introducing Mahershala Ali’s Blade, and while the Daywalker doesn’t appear physically, he’s there in spirit. Even though Blade hasn’t started filming yet, Ali is clearly lurking in the shadows.

Alongside a mention of Kingo’s valet trying to stake him because he thought he was a vampire, Blade arrives just in time for the end of Eternals. When Dane Whitman unboxes the Ebony Blade, we hear Ali’s voice warning that “Mr Whitman” isn’t ready to twirl the cursed sword. 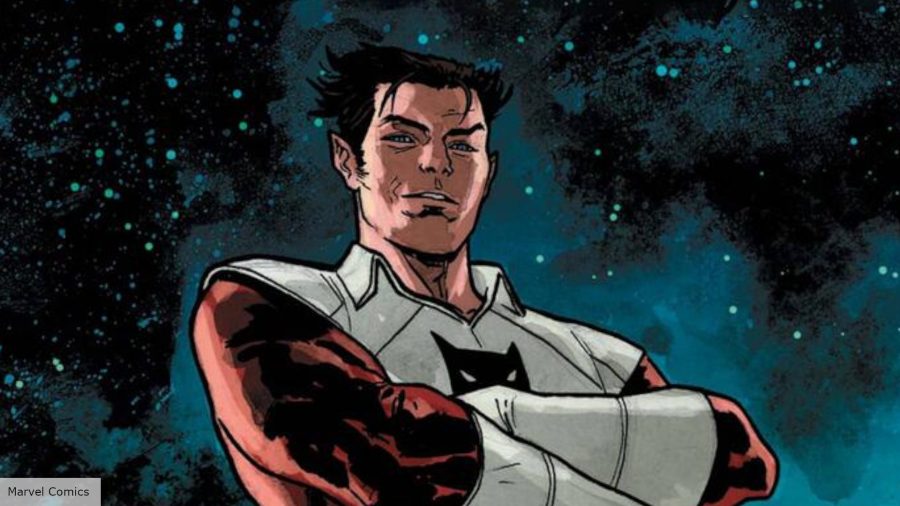 Reach for the stars

The other jaw-dropping post-credits scene adds two more cosmic entities to the MCU’s growing sci-fi credentials. Although the cameo was spoiled ahead of time, Harry Styles makes his debut at Starfox. Those up on the comics will know Starfox is pretty big news as the cocky brother of Thanos.

Despite the Mad Titan seemingly out for the count, Starfox’s introduction is crying out for Josh Brolin to reprise his role as Thanos. Starfox isn’t alone, with Patton Oswalt voicing the comedic Pip the Troll.

Both characters have some interesting history with the Guardians of the Galaxy, and with a certain Adam Warlock also butting heads with Starfox and Pip, Eternals lays the foundations for Guardians of the Galaxy Vol. 3 and beyond. It’s surely no coincidence the credits come with a Guardians-inspired rocking soundtrack of Foreigner’s “Feels Like The First Time”. 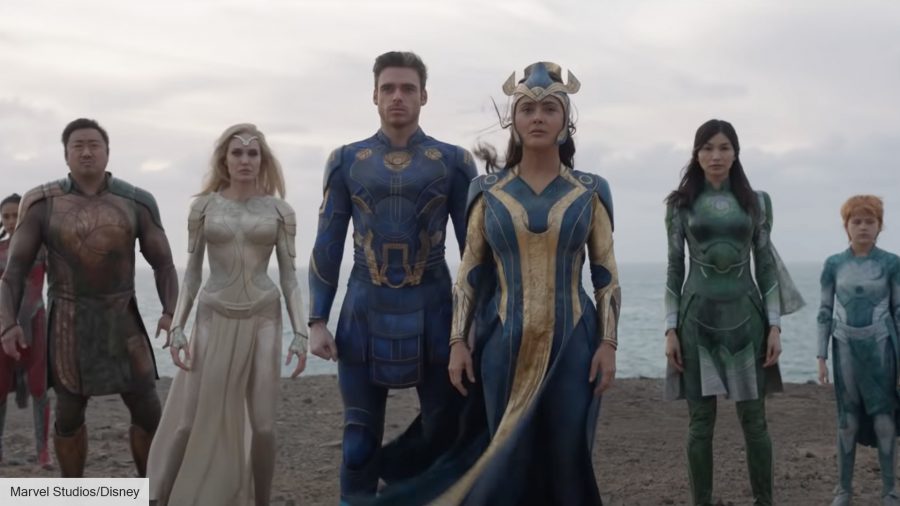 Eternals wasted no time in delivering shock twists by chucking Jack Kirby’s comics out of the window. Whereas the Eternals of the comics are highly evolved beings, the movie revealed them as robotic creations of Arishem the Judge. What is it with Chan always playing a robot?

Part of this is Jolie’s Thena glitching and going on a Terminator-inspired rampage. It turns out that Arishem’s memory wipe has faltered, which allowed a malfunctioning Thena to remember their past lives.

The fact Eternals are effectively robots throws up some interesting questions of how Harry Styles’ Starfox comes into play – especially considering Arishem implies it’s the same 10 Eternals that go on the continuous cycle of life and death, bringing the Celestials to life. Comic book Starfox is supposed to be the son of an Eternal called A’Lars. As they can’t (presumably) can’t reproduce, it also implies Phastos’ son isn’t biologically his. 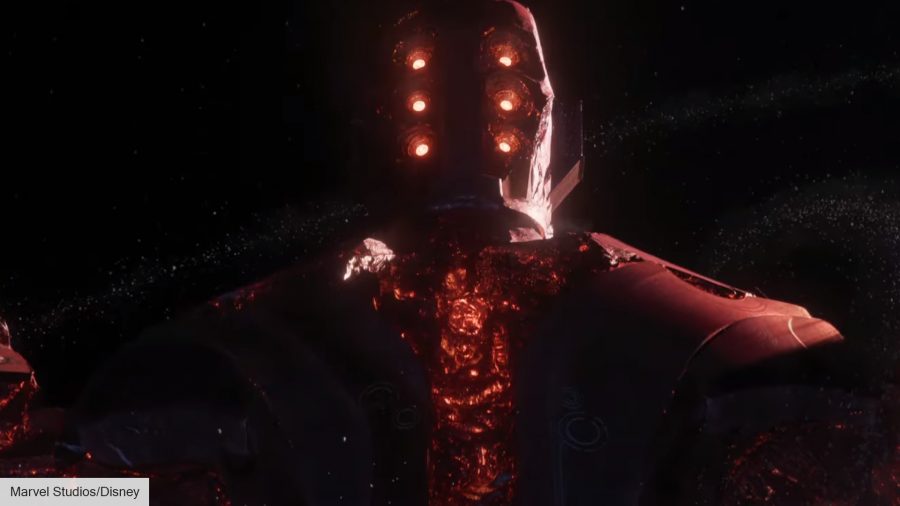 It’s easy to see where we’ll be going with the inevitable Eternals 2. Towards the end, Druig asks Makari if the others will take the news as well as they did. It doesn’t take long for us to meet Starfox.

Starfox says he knows where the missing Eternals like Sersi have gone, and with Arishem saying he’ll be back to “judge” the worthiness of the human race, that red giant isn’t done with us mere mortals yet. In terms of the Eternals 2 cast, expect some more big names.

Zhao told Fandom there were originally plans to have up to 12 Eternals before she settled on the roster of 10. Other major players that could pop up further down the line include the previously mentioned A’Lars, the Eternal-Inhuman hybrid Thane, and Titan’s founder – Kronos.