We’re getting a new Hellraiser movie soon, and the Cenobites are going to be appropriately horrifying. Producer David S Goyer says the horror movie sequel is “terrifying and amazing”.

This was during an interview with Collider, where Goyer provided a quick, if slightly vague, update on production. “I will say that we went back to the original novella for the source material, we’re really honoring Clive’s work,” he says. “I can say that David Bruckner is a genius. It’s filming right now. The footage is terrifying and amazing, and the Cenobites are jaw-dropping.”

Goyer confirmed that filming is taking place right now, with Bruckner helming the production. Fresh off his film The Night House, which came to theatres and VOD in August, Bruckner also directed 2017 monster movie The Ritual, and contributed to the anthologies V/H/S, The Signal, and Southbound. He was announced as director on the new Hellraiser back in 2020, when it was revealed this wasn’t going to draw from established franchise continuity. Instead, as Bruckner puts it, it’ll be a “small reimagining”.

Led by Pinhead, a demonic Cenobite who emerges when you solve his cursed puzzle box, what started as an ’80s movie has become a pillar of cinematic horror. Hellraiser has now spawned ten films, though the timeline is extremely loose beyond more hapless victims stumbling onto said summoning contraption.

Barker himself adapted his book The Hellbound Heart for the first movie, but has since moved away from the Cenobites. Bruckner’s picture is co-written by Ben Collins and Luke Piotrowski, who penned The Night House’s script. It’s not the only Cenobite summoning ritual in the pipeline, a TV series is coming to streaming service HBO Max, too, with Halloween Kills director David Gordon Green overseeing the pilot.

The new Hellraiser is tentatively due in 2022. Here’s the best horror movies on Netflix for some scares while we wait for more. 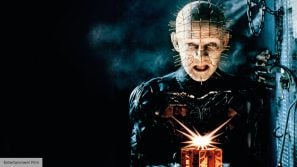