Seasoned horror director David Brucker (The Ritual) is set to head the reboot for one of the best horror movies of all time, Hellraiser. In a recent interview with SFX magazine, the director teased that the new take on Clive Barker’s gory classic will be “something of a small reimagining” of the beloved movie, and its original source material.

“We can’t say anything about it yet,” Brucker tells SFX via Games Radar. “But it is something that we are actively working towards, and it is a joy and a dream for a filmmaker like myself to dive into that world.” While no plot details were given, the director explained how the movie will be looking towards Barker’s novella for inspiration, hinting that the reboot won’t be continuing the storylines set up by all the ‘80s movie’s previous sequels.

“All I’ll say is that we are aiming to be as true as we can to the original material,” Brucker said. “[Clive Barker’s original story] ‘The Hellbound Heart’ is also a primary source of inspiration, as well as the original film. But then it is something of a small reimagining, and we are currently working on it.”

The Hellbound Heart is Clive Barker’s original novel, which the 1987 movie is also based on. Ben Collins and Luke Piotrowski are currently on board to adapt Barker’s work, and we are curious to see how they will approach the story for their new script. So far, we know that Pinhead will be female in the remake, and that Odessa A’Zion has been cast as a leading character. Stay tuned for more updates.

A new Hellraiser TV series is also in the works, which Clive Barker will executive produce. The series is an HBO Max exclusive, but as yet no release date has been confirmed. Brucker’s film will also be heading to a streaming service, and will be released exclusively on Hulu.

For more scares check out our list of the best horror movies on Netflix. 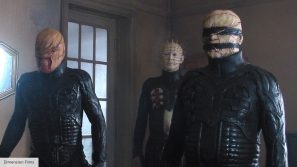