Paramount Pictures has decided to cancel the release of the highly anticipated family movie Clifford the Big Red Dog, as the number of Covid-19 Delta variant cases continue to rise across the US.

Originally planned for a widespread theatrical release this September, the live-action movie adaptation of Norman Bridwell’s beloved canine character has been officially delayed. The news comes less than two months before the film was due to hit the big screen, and shocked fans since its trailer did so well amongst its target demographic last month. However, putting the perceived success of the fantasy movie’s marketing aside, the studio’s reasoning for the cancellation does make sense.

The decision was due to safety, and Paramount’s concern about potential box office profits. Despite the studio’s success with the kids movie’s trailer and other online marketing efforts, the question of whether families will brave indoor venues proved to be too much of a financial risk. According to Movieweb, Paramount perceived that there would be a high probability that families won’t be attending the cinema, especially in areas like Los Angeles, where Covid-19 cases are rising rapidly.

This isn’t the first production to be affected by the virus. Recently the new season of American Horror Story, and Netflix’s Matilda musical also suffered setbacks thanks to the pandemic. It’s a stark reminder that, although lockdowns and restrictions have eased, Covid-19 is still around, and is still affecting film crews, cast members, and audiences alike.

Clifford enthusiasts have been left to speculate what all this means for the big red dog’s cinematic future. So far, Paramount hasn’t revealed if they will continue their efforts for a theatrical release, or if the movie will instead premiere on the studio’s streaming service Paramount Plus. Stay tuned for updates.

In the meantime, why not check out our list of the best adventure movies for more escapism and fantastical fun. 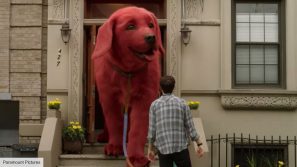 We sometimes include relevant affiliate links in articles from which we earn a small commission. For more information, click here.
Trending in Movie Latest in Movie
Ewan McGregor's reaction to hearing Star Wars: Attack of the Clones for the first time is still iconic
Cruella director wants Emma Thompson in the sequel
Netflix announces Tiger King 2, more true crime series
Jason Momoa shouts out Game of Thrones in Dune training video
Harry Potter fans are all making the same joke about Secrets of Dumbledore
A