Despite being only released a few months ago, Zack Snyder‘s Vegas-set zombie movie Army of the Dead has already spawned no less than three spin-offs. There’s a prequel, a sequel AND an anime series to come.

The prequel Army of Thieves – lands on Netflix this Friday and is a heist movie focused on Matthias Schweighofer’s safecracker Dieter. The anime series is another prequel, entitled Army of the Dead: Lost Vegas. And now Snyder has revealed that his planned sequel to the Netflix hit is going to be called Planet of the Dead.

In an interview with Inverse, Snyder dropped a hint that Dieter could be returning in the sequel as well; “I won’t tell you what happens in Army of the Dead 2 — aka Planet of the Dead — but let’s just say that there’s a chance Dieter survives. And there’s a chance that brush with death would have caused him to want to find a jailed Gwendoline.”

The “Snyderverse” may no longer be associated with Batman or Superman, but rather this collection of “Dead” films – which of course started in 2004 with Snyder’s Dawn of the Dead remake – and also his original sci-fi epic Rebel Moon; “I would hope that anything Snyderverseian is [whatever] we’re doing as original IP. The DC universe is something that’s very close to my heart and something I spent a lot of time developing and thinking about, so I love it. But where I am right now is with the Rebel Moon of it all and the Army of the Dead of it all. They’re very much consuming our creative output. Hopefully, just anything that we’re doing that’s original and cool would fit into that category.”

With Matt Reeves’ hotly-anticipated The Batman set for March 2022, it looks like Zack Snyder has definitely moved on from the DCEU and is firmly ensconced in the world of zombies. And with Army of Thieves hitting Netflix on Friday, we don’t have long to find out how his world of the Dead is going to continue evolving… 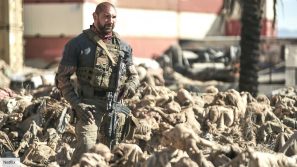