It sounds like Zack Snyder wants his next zombie movie to be something more fun. In an interview with Variety, he says the plan is for Planet of the Dead to be more of a sci-fi action movie than its predecessor.

“Shay [Hatten] and I have been talking about the straight sequel to Army of the Dead being possibly a sci-fi actioner with horror elements,” Snyder explains. “So that’s a fun genre, probably with a heist at its center.” Going more action-oriented with a horror background didn’t do Aliens any more. At risk of sounding too flippant, though, the first Army of the Dead was already a pretty straight science fiction movie with horror elements. But at the same time, he’s right, that is a fun space to occupy, and it sounds like his next Netflix horror movie will have more of the same for fans.

On that note, Snyder didn’t give too much away on what the plan is going forward, only that it’ll leave genre-savvy viewers happy. “We’re standing by to have fun with the genres we love and deconstruct them, almost from a self-aware cinematic angle, which makes this universe of movies really interesting,” he says. “It’s movies for people who love movies, without letting anyone off the hook as far as the drama and suspense. And I promise there will be zombies.”

Besides the sequel, Planet of the Dead, the Army of the Dead universe is expanding in other directions in the coming years. An animated series is in production for next year, and we just got the Matthias Schweighöfer-led Army of Thieves on Netflix.

As if all that wasn’t enough, Snyder is also hard at work at another, straight sci-fi picture called Rebel Moon. Sofia Boutella just signed on to be the lead, and it’s also heading to Netflix.

Plenty of Snyder in the offing for the streaming service. For something a little more immediate, you can see Red Notice, starring Dwayne Johnson, Ryan Reynolds, and Gal Gadot, on the platform on November 12. 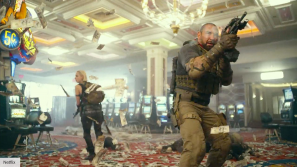