Zack Snyder is hard at work on his next film for Netflix – the original sci-fi adventure Rebel Moon and it appears that he has found his star – Sofia Boutella. Snyder has apparently been meeting with potential cast members for months and has now narrowed the lead part down to Boutella, according to Deadline.

Boutella is no stranger to genre film, appearing mainly in action movies such as Kingsman: The Secret Service, Star Trek Beyond, Atomic Blonde and The Mummy. Snyder has described Rebel Moon as “a romantic sci-fi film on a scale that is just frankly as big as you can make a movie,” while comparing it to the opening sequence of Man of Steel.

Snyder has just started a new relationship with Netflix, with his two new zombie movies – Army of the Dead and its prequel Army of Thieves debuting on the streamer this year. He is going to continue that with Rebel Moon, even though it sounds as if the scale would be more suited to a big screen.

The film is set in a peaceful colony on the edge of the galaxy that finds itself threatened by the armies of the tyrannical Regent Balisarius. They dispatch a young woman with a mysterious past to seek out warriors from neighboring planets to help them take a stand against the Tyrant.

It is unusual for a big-budget sci-fi movie to not be based on existing IP, such as Dune, which is currently doing so well that a sequel has been greenlit. Boutella starred in a much smaller scale sci-fi indie this year called Settlers, about the challenges that a family faces as part of their lives on Mars.

Given Snyder’s previous work within franchises – whether its the DCEU or the ‘Dead’ series – it will come as no surprise if Rebel Moon is the first of a series of movies set in this world. Both he and Netflix will be riding a lot on the success on this first movie and the star is a crucial component of that. It looks as though that piece of the puzzle has been put into place, at least. 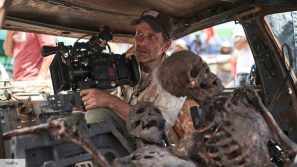