Former DCEU mastermind Zack Snyder has opened up about his new Netflix movie Rebel Moon. Snyder has compared his new science fiction movie to the opening of the Man of Steel but “on steroids”. Fans will, of course, remember that Snyder’s take on the Superman mythos begins with an intense sequence where we see the destruction of planet Krypton.

“The beginning of Man of Steel has some pretty big science fiction elements in it,” Snyder told the Post-Credit Podcast. “That’s kind of what we’re doing in Rebel Moon. But on the biggest steroids that I can give it. And that’s frankly, what I’m really interested with this movie is creating a romantic sci-fi film on a scale that is just frankly as big as you can make a movie, and that’s the thing that really makes me excited.”

The promise then that Rebel Moon will be even more apocalyptic than an entire planet collapsing in on itself will no doubt have disaster action movie fans salivating at all the carnage to come. Let’s hope the movie has a hero who can save the day.

Based on a Star Wars pitch Snyder made years ago, Rebel Moon will tell the story of a peaceful colony on the edge of the galaxy that’s threatened by the armies of a despotic regent named Balisarius. To stop the tyrant’s evil reign, the people of the colony send a young woman to the past to seek out warriors from neighbouring planets to help them defeat the invaders.

Snyder will direct and produce the film for streaming service Netflix, and he’s co-writing the script with Shay Hatten who wrote the zombie movie Army of the Dead and 300’s Kurt Johnson. The Man of Steel director is hoping his new movie is a success, telling The Hollywood Reporter that he wants Rebel Moon to “become a massive IP” and a “universe that he can build out”.

If you love exploring other worlds and boldly going where no one has gone before then you need to check out our guide on the best sci-fi series. 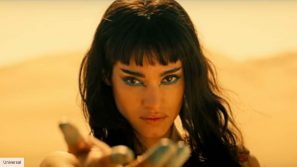