Let’s just say it’s a great time to be a Dungeons and Dragons fan right now. In an interview with Deadline, Michael Lombardo, former HBO president of programming, has shared Hasbro’s plans for producing multiple D&D TV series, and how the upcoming Dungeons and Dragons movie will connect to a bigger universe in the company’s portfolio.

Directed by Jonathan Goldstein and John Francis Daley, the Dungeons and Dragons movie officially wrapped filming in August 2021, and is currently on track to release in 2023. Plot details about the highly anticipated fantasy movie have been kept under wraps, and many D&D fans have wondered if the film will attempt to tackle the massive well of lore from the tabletop roleplaying game on which it is based. Well, it appears that whatever direction the flick does take, it won’t exist as a standalone feature.

“We have a big movie that’s in post right now that will come out first,” Lombardo explained. “So, we’re trying to also navigate the brand more holistically so that the movie feels not apart from but connected somehow to a bigger universe.”

Besides the new film, which will see the likes of Chris Pine, Michelle Rodriguez, and Hugh Grant navigate the Forgotten Realms, in January 2021, a new D&D TV series was announced to be in the works. The show will be helmed by Derek Kolstad (John Wick), with Paramount producing. This series will likely connect to the upcoming adventure movie, as Hasbro “holistically” builds its cinematic D&D brand. However, no plot details or franchise plans have been confirmed just yet.

Lombardo did however disclose how the company plans to use the show as the starting point for more programming. “Our big focus right now is Dungeons & Dragons. When I initially sat with Darren Throop [Entertainment One’s CEO] and Steve Bertram [president of Film and Television], knowing that Dungeons is part of the Hasbro portfolio was incredibly exciting to me,” Lombardo said. “We don’t want it to just be one show, so we are building out, developing out a multi-pronged approach for television, a number of scripted shows and unscripted, and we hope to be taking this out to the marketplace early next year.” 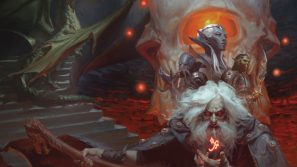