How does Yellowjackets season 1 end? The Showtime horror TV series from Ashley Lyle and Bart Nickerson has become one of the breakout hits of the last year, its bitter story of teenage survival, and the lingering scars, keeping audiences engaged from the jump. In the climax of the first season, we get a couple of major reveals for Shauna and her teammates, setting up a seriously intense Yellowjackets season 2.

Between the bitter drama of the younger teens in 1996, who must brave the Ontario wilderness when their plane crashlands, and the high-strung tension of their adult counterparts in 2021, it’s hard to think which side of the narrative has it harder. Indeed, by the end, we see both have rough times ahead, even more so than they’ve already endured.

What happens in the final episode? That’s a big question, leading to more big questions. Taissa, Natalie, Shauna, and Misty each have their particular mess to deal with, and it seems like things are really about to kick off in ’96. Rest assured, we’ve done all the poking around necessary, to tell you exactly what happens, and give some educated guesses on what’s coming.

In the season finale, we get revelations for several threads. The biggest is on the ’96 side, where personal feelings bubble over between Shauna (Sophie Nélisse), Jackie (Ella Purnell), and the rest of the group. Jackie challenges Shauna on cheating with Jeff after reading her diary, to which Shauna replies that Jackie’s a controlling best friend to the point of being toxic.

Tempers flare, and Jackie chooses to sleep outside, away from everyone in the cabin. Taissa (Tawny Cypress) and Shauna, who sleep in the attic, consider helping her, but Shauna decides against it. They wake up to find Jackie frozen to death in overnight snow. If that isn’t morbid enough, we’re treated to Jackie having a dream as she passes, where everyone apologises and brings her back into the cabin for warmth.

Shauna is inconsolable, knowing that her best friend has died because of an argument over a boy that got out of hand. This puts a grim twist on adult Shauna’s visions of Jackie, a lingering guilt that won’t ever fade because the one person who could really forgive her is gone forever. 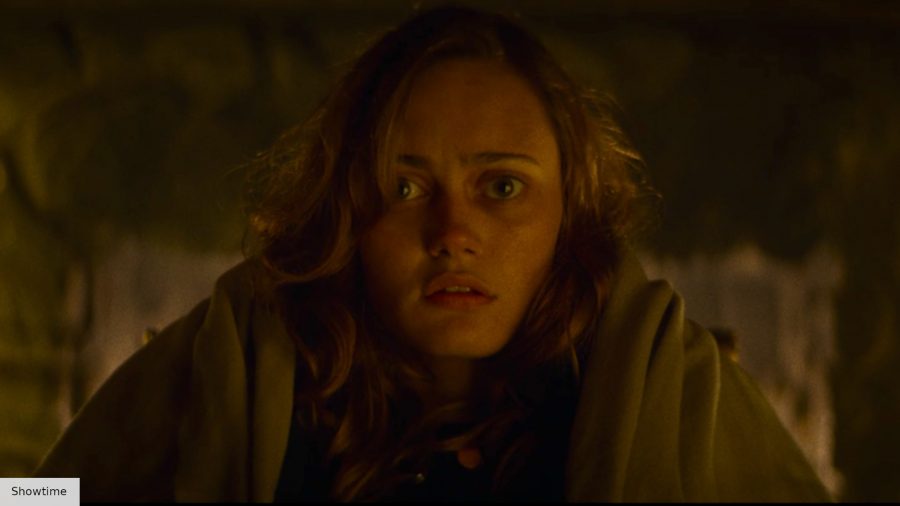 Fast forward to 2021, and it’s Taissa (Jasmin Savoy Brown), Natalie (Juliette Lewis), and Misty (Christina Ricci) who’re more the focus. Misty lets Jessica (Rekha Sharma), the private investigator she had kidnapped for snooping around the surviving Yellowjackets, go. But, this being Misty, Jessica’s freedom is short-lived. She passes out while driving, and it’s revealed that Mistry drugged her cigarettes. Always smarter than she looks, that Misty.

Taissa sits nervously waiting for her election results to come in. Concurrent to the results being counted on TV, Simone (Rukiya Bernard), Taissa’s wife, discovers an opening in their basement. She follows it to a bloodsoaked shrine, with the decapitated head of the family dog, and that ominous, recurring stick figure. Taissa smiles as it’s announced she won her race, implying that she took part in some ritual, despite claiming to be a cynic, in order to achieve victory.

About time: The best sci-fi series

Where it all ties together, then is with Natalie. Distraught over Travis’s death, she contemplates suicide. Before she can do it, some people in tracksuits burst into her motel room and kidnap her, while her phone rings out. It’s someone she asked to look into Travis’s bank accounts being drained – the important part is when she mentions Lottie. 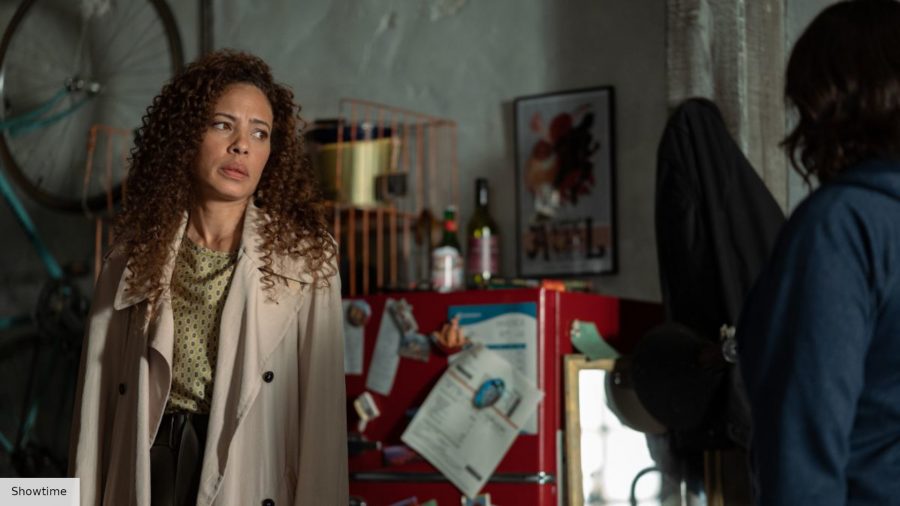 Cut to Lottie (Courtney Eaton), holding out the heart of the bear she killed for the group to eat to some makeshift wooden altar, On one side is Natalie, who’s been alienated for her magic mushrooms making everyone hallucinate, and on the other, Van, who’s become convinced supernatural forces are at play.

This creates the idea Lottie is behind sending those cards, bringing everyone together, and has since become the head of a secret cult based on what they experienced out there in the wild. A thematic through-line has been the dividing line between paranormal events, and intense trauma responses. Yellowjackets offers little clarity, only that people have clearly been driven to extreme ends. 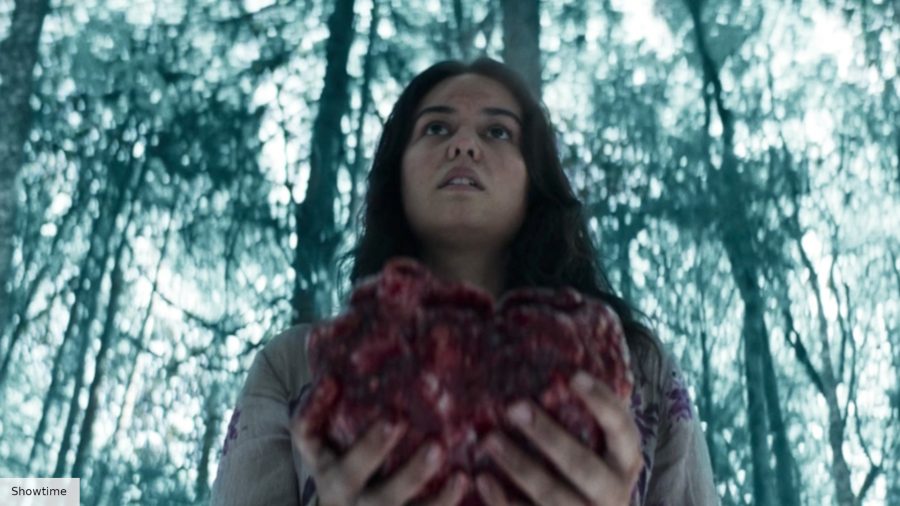 IS LOTTIE THE ANTLER QUEEN?

It appears that yes, she’s the one wearing the antlers in the opening episode, who leads the group in an apparent human sacrifice and cannibalistic meal. Her visions suggested this was the case, and the closing scene makes it quite apparent.

We still don’t really know how they get to that first scene – how do they convince others to join them? Do they all eventually get in on it? How are targets selected? However, the bigger, and more concerning, aspect now is who Lottie has become. It seems like she now commands a fervent religion of her own. How deep is her influence? Was there ever any hope for the remaining Yellowjackets to live a normal life?

Taissa appears to have been converted somehow. Was she always secretly down with it all? Or did Lottie approach her with an offer? Multiple possibilities are the sign of a good cliffhanger, and Yellowjackets has those in spades. 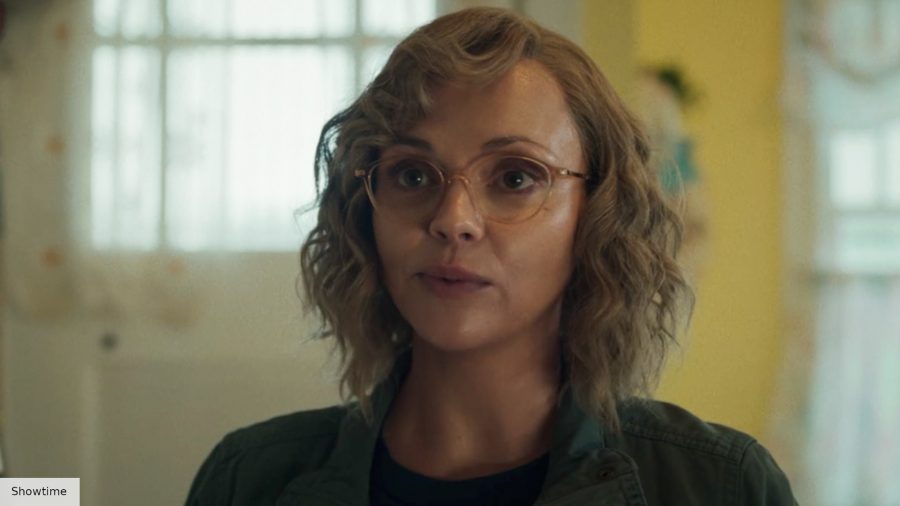 DO THE YELLOWJACKETS REALLY BECOME CANNIBALS?

Well, this is a contentious subject. The first episode seems clear cut that they kill someone, drain her blood, and then eat her. But we only see her being trapped, then it jumps to chunks of meat. The large implication, yes, but that doesn’t make it true.

Another likelihood is that she was chosen to die for some reason, and her blood is a tribute to the land. They then eat typical game like rabbit, deer, or bear. Shauna’s transfixion with dissecting rabbits could go either way on this: a trauma response from cleaving human flesh, or prolonged, monotonous skinning of animals that’s soaked into her psyche.

They got very close to killing Travis while tripping on those mushrooms, and some may have liked the power and considered it necessary. Once it happens the first time, it’ll only get easier. Who’ll be that victim? Another question to add to the list!

And that’s the ending of Yellowjackets season 1. Doesn’t make the wait for season 2 any easier, does it? For more televisual goodness, have a look at our guides to The Witcher season 3, The White Lotus season 2, and Star Wars: Obi-Wan Kenobi. 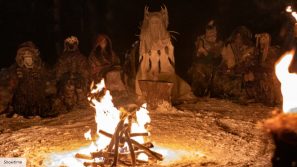 Yellowjackets season 2 release date speculation, cast, plot and more
Get involved Continue the conversation over on The Digital Fix Forum