The first trailer for the new Pixar movie Lightyear launched yesterday to the delight of Toy Story fans the world over. While most were caught up in the spectacle of the spin-off, some people, though, couldn’t help but notice Buzz looked an awful lot like another famous animated character, Joe Swanson from the TV series Family Guy.

Fans have been sharing their shock on social media. “Someone said the new buzz lightyear looks like a 3D animated Joe Swanson, and now I can’t unsee it,” tweeted one fan, while another asked: “Wait…..Buzz Lightyear was Joe Swanson the whole time?”

Now it’s undeniable that Joe and this new version of Buzz share a passing resemblance, mostly thanks to their strong chins, but it’s worth noting that Buzz predates Joe. Family Guy debuted in 1999, a whole three years after the original Toy Story, so technically, Joe looks like Buzz, not the other way round. Interestingly, though, Buzz and Joe share a voice actor. No, Chris Evans has never voiced Joe in Family Guy, but Patrick Warburton did play Buzz in the animated series Buzz Lightyear of Star Command.

The new Lightyear animated movie is a different take on the famous toy astronaut. While technically a spin-off of Toy Story, it’s slightly more complicated than that. The film is a defictionalised version of the movie that served as the inspiration for the action figure we see in Toy Story.

Is it just me, or is Buzz lookin' like a Handsome Joe Swanson pic.twitter.com/MaGj0YzW5g

Basically, you’re watching the science fiction movie that Andy saw and that made him want a Buzz Lightyear action figure for his birthday. The movie will serve as an origin story for the character Buzz Lightyear, revealing how he became a galactic hero in the Space Rangers.

Lightyear is scheduled to be released on June 17, 2022. While we wait check out our list of the best Disney movies. 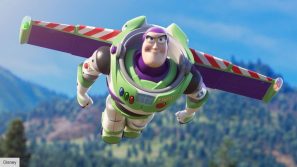