Lara Croft is becoming a Netflix anime series, and now she has a new voice. Marvel Cinematic Universe actor Hayley Atwell is taking on the action and adventure game protagonist for the project.

Not a huge amount is known about the Netflix TV series at the moment, but Deadline reports it’ll be a continuation of the recent trilogy of videogames. Starting with 2013’s Tomb Raider, the three games, published by Square Enix, introduced a grittier Lara with more survival elements. The mix of action, puzzle-solving, and exploration gave the hero a new lease of life, invigorating the franchise.

Netflix’s Tomb Raider is being written by Tasha Huo, who worked On The Witcher: Blood Origin for the platform, who’s also executive producing with Jacob Robinson, Dmitri M. Johnson, Stephan Bugaj and Howard Bliss. Huo posted on Twitter about the announcement of Atwell’s involvement, saying that the show is “going to be awesome”. No other details were provided, nor specification of production schedule, but the news is certainly optimistic for the direction of the series.

Atwell’s no stranger to massive franchises. Besides the MCU, she has a role in the upcoming action movie Mission: Impossible 7, which is due out next year. This being a voice role, it’ll be easier to fit around commitments to that blockbuster.

So very excited, both as a Showrunner and #TombRaider super fan, to finally announce our Lara Croft, and to be working with this extremely talented human. Guys… this show is going to be awesome.https://t.co/xNkYMD0bML

These aren’t the only tombs Lara’s raiding, either. Alicia Vikander says the followup to 2018’s thriller movie Tomb Raider is still in development. We’ll let you know when, and where, you can spot the berretta-wielding explorer when we can.

Here’s the best adventure movies, and the best science fiction movies, in the meantime. 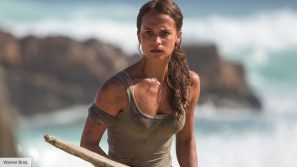