Alicia Vikander has offered an update on the sequel to her 2018 Tomb Raider movie. The film, tentatively titled Tomb Raider: Obsidian, was delayed indefinitely last year by MGM thanks to Covid-19 and the global pandemic. However, Vikander told Collider she still has hope for the adventure movie despite it no longer being greenlit.

“Pre-Covid, I would’ve said yes. And now I think it’s a yes still,” Vikander said when asked if she’d return for the Tomb Raider sequel. “It’s not greenlit, but the script is in the making, and I think everyone is excited, and I would love to revisit Lara again.”

Despite not officially being greenlit, the thriller movie’s director and writer Misha Green – the showrunner for the TV series Lovecraft Country – has been hard at work on the film. She tweeted earlier this year that she’s finished a first draft of the script, and Vikander has said she’s keen to get her hands on it. “Misha is onboard, and she’s working on the script right now. So I’m very excited to sort of read something very soon,” she said.

Tomb Raider: Obsidian has had a rocky production so far. The film was greenlit after the relative success of the original movie in 2019, with Amy Jump signing on to write the movie and Ben Wheatley coming on board as director.

Still a long journey to production. Title's not even approved. 🤫😜
But first draft finished!!! 🎉🥳🎊 #TombRaider pic.twitter.com/wrKVUubM6I

It was announced that filming would start in early 2020 in England before moving on to South Africa, Finland and China. Unfortunately, the pandemic put a stop to those plans, and the film fell into development hell. Wheatley and Jump left the action movie earlier this year, and Green was brought in to replace him.

Despite the script being finished and Vikander being confident it will be made the film’s fate is up in the air until an official announcement is made. While we wait for news why not check out our best fantasy movie list. 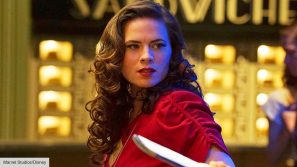