Jessica Henwick has opened up about one of the main characters in the highly anticipated science fiction movie The Matrix Resurrections. The actor hinted that Carrie-Anne Moss, who plays Trinity in the acclaimed franchise, has “a really interesting role” and that fans will be “happy” with her performance in The Matrix 4.

Carrie-Anne Moss’s character in the new action movie is somewhat of a mystery. In the last Matrix movie, The Matrix Revolutions, we saw the character die. However, in the trailer for The Matrix Resurrections, we see her now supposedly alive and reunited with Neo (Keanu Reeves). So, a few questions need answering, and a few fans are worried about how the latest flick will affect the canon set up by the past films. In an interview with Collider, discussing her time working on the Matrix 4 and the anime series Blade Runner: Black Lotus, Henwick helped ease some of our apprehensions.

When asked what she was most excited about when it came to the release of the latest Matrix movie, Henwick listed, seeing Keanu Reeves reprise the role of Neo and the fan’s reactions to Moss’s all-new depiction of Trinity.

“I’m excited for fans to get to see Keanu. We love him. We love him as Neo. He’s amazing. He is the beating heart of the film, and he can do no wrong. So, I think fans are really going to enjoy that,” Henwick said. “Carrie-Anne has a really interesting role in this film, and I think a lot of people are going to be happy with her work. That’s really what I’m excited to see.”

This isn’t the first time Henwick has given some insider knowledge about the Matrix 4. Previously the star shared how the director of the film Lana Wachowski considered closing production due to Covid-19. Luckily, the flick wasn’t cancelled, and fans can look forward to seeing Carrie-Anne Moss’s “interesting” take on Trinity for themselves soon.

The Matrix Resurrections opens in theatres on December 22, 2021. 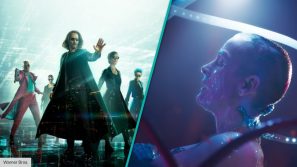 The Matrix 4 trailer, release date, cast, and more – when is The Matrix Resurrections out?
Get involved Continue the conversation over on The Digital Fix Forum