David Harbour, who portrays Chief Hopper in the Netflix TV series Stranger Things, has said that the hit show won’t make the same narrative mistakes as ABC’s acclaimed series Lost. In an interview at New York Comic-Con, via Entertainment Weekly, the star compared the two shows but assured fans that Stranger Things season 4 will “become a complete piece” instead of leaving unanswered questions like Lost did over a decade ago.

After braving the Upside Down and facing off against the Mind Flare in season 3, many fans assumed Harbour’s run with the show had ended. However, Netflix released the first teaser for season 4 earlier this year which revealed a bald Hopper, now a captive of the Russians. During the panel discussion for the new season of Stranger Things, Harbour spoke on a few of the upcoming interwoven plotlines that fans can expect.

The star mentioned Hopper’s experience as a prisoner, a new connection to the Upside Down via ‘Creel House’ (as seen in Netflix’s teaser), and more backstory to Eleven and Brenner in the institution will be included. As you can probably tell, there is already a lot going on, but Harbour said this is setting up the end game for the series, and having an overly complicated plot like other hit shows – such as Lost – will be avoided.

“What we’re trying to do, as we elaborate this thing, [is] to draw it back and make sure that we don’t have an endgame like, some of us thought about, that show Lost. ‘What happened to the polar bear?'” Harbour teased. “We’re trying to draw in, so the [elements of the story line] starts to come to a head and becomes a complete piece.”

The star added he feels that this is also the “deepest season we’ve got to go” with his character, and that “season 4 lays a lot of pipe for [Hopper].” Paired with all these narrative promises, the star previously compared Hopper’s survival from season 3 to Gandalf’s return in Peter Jackson’s Lord of the Rings trilogy – hinting at a powerful character arc in season 4. Needless to say, Harbour’s words only add to the excitement for the TV series, and drives up fans expectations.

Stranger Things season 4 is scheduled to release exclusively on the streaming service Netflix. While we wait for more otherworldly creatures, here is our list of the best sci-fi series of all time. 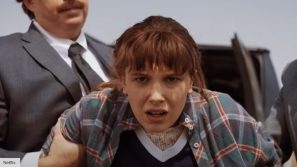