Netflix has just revealed the first look at Stranger Things season 4, and has confirmed that the hit sci-fi series will be back in 2022.

The streaming service has released a teaser for the upcoming season, and despite being somewhat cryptic on the show’s future plot, it looks like it will be an action-packed chapter for the spooky ‘80s story, and will live up to the long built-up hype among fans. The clip opens with recapping the series so far, even showing the gang rocking those ghostbuster costumes from season 2. As the video goes on, we get some exciting new snippets of information. We get a chance to see Eleven (Millie Bobby Brown) sporting a new hairdo while some Men in Black looking agents are restraining her.

Netflix’s clip also shows the mysterious return of Hopper (David Harbour), who many suspected wouldn’t return to the series after his dramatic end in the last season. Another takeaway that we can add to our Stranger Things season 4 knowledge is the addition of some new characters, and the surprising absence of others seen in the video.

In the teaser, we get a first glimpse at the new cheerleader Chrissy (Van Diel). However, there is no sign of Mike (Finn Wolfhard) or Will Byers (Noah Schnapp). Both the actors have been confirmed for the fourth season, so it is a mystery why they were excluded from the clip. Season 3 ended with the Byers family moving out of Hawkins. Still, we suspect that they will play some role in the upside down next year.

Stranger Things returns in 2022! See you in the upside down pic.twitter.com/9scVCGzekF

Although we don’t have a set date just yet for Stranger Things season 4, at least we know that it’ll hit Netflix in 2022. Any date is better than no date, right? In the meantime, why not check out our list of the best monster movies while we wait for more Demogorgons. 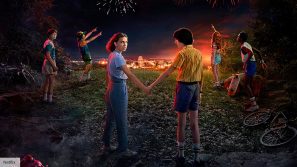 Stranger Things season 4 release date, trailer, and cast – everything we know
Get involved Continue the conversation over on The Digital Fix Forum