Idris Elba has confirmed that the live-action version of everyone’s favourite red echidna, Knuckles, “won’t be sexy”. In a recent interview with Screenrant, the actor shared that he won’t be bringing his typical British charm to the set of the highly anticipated videogame movie, Sonic the Hedgehog 2.

In August, it was revealed that Elba had been cast to voice Knuckles in the sequel to the wildly successful action movie, Sonic the Hedgehog. The casting news was well received by fans of the Sega franchise. However, there were plenty of jokes about Knuckles turning sexy, based on Elba’s track record with roles in Hollywood. The actor is known for his debonair English sensibilities and dangerous ‘bad boy’ characters.

Coming off his striking performance as Bloodsport in the DCEU film The Suicide Squad, and as the titular character in the TV series Luther, many are wondering how (or if) he will tone down his general demeanour for the upcoming family movie. When asked about what fans can expect from his performance as the cartoon character, the actor didn’t give too much away but did confirm that his voice work for Knuckles won’t be drawing inspiration from some of his other, less family-friendly roles.

“Honestly, I cannot say. Contractually, I cannot say anything. But I wouldn’t say he was sexy,” Elba said. “I don’t think I’m going for that. That’s for sure.”

Although Elba didn’t give any plot details away during the interview, we know that this “not sexy” take on Knuckles will likely be involved with the Chaos Emeralds, and will probably be tricked by Dr Robotnik (Jim Carrey) to team up against Sonic (Ben Schwartz).

Currently, we are still waiting to see who will voice the part of Tails, who is also expected to appear in the sequel. Colleen O’Shaughnessey voiced the character in the first movie’s post-credits scene, but there’s been no confirmation on her reprising the role for Sonic 2. Stay tuned for updates. 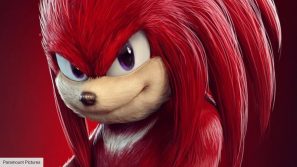