Idris Elba must have a taste for chilli dogs because he’s joined the cast of Sonic the Hedgehog 2. Elba will be lending his voice to Sonic’s new friend, Knuckles, the hot-headed echidna. The Suicide Squad star confirmed the news on social media by sharing a picture of Knuckles’ spiked fist.

Elba will star opposite the returning Sonic cast James Marsden, Tika Sumpter, Natasha Rothwell, Jim Carrey, and Ben Schwartz. Sonic 2’s plot details are being kept ultra-secret at the moment. Still, we know the comedy movie will see Sonic (Schwartz) team up with his iconic partner Tails, as well his former rival Knuckles, to battle a returning Robotnik (Carrey).

Knuckles first appeared in 1994’s Sonic the Hedgehog 3, where Robotnik tricked him into thinking Sonic is trying to steal a powerful gem called Master Emerald. Knuckles then battles Sonic and Tails before eventually realising (in the sequel Sonic & Knuckles) that he’s been duped by the evil doctor who plans on using the stones for his own nefarious ends. To enter the realm of speculation for a moment, we think it’s likely the film will probably adapt some of this storyline.

Fans shared their delight on social media last night by doing what Sonic fans do best, making jokes about a franchise they love, the best of which came from @DynamoSuperX who wrote: “An alternate timeline exists where every Sonic fan is scared shitless of the Knuckles teaser cause they kept the horrific design from the first movie trailer.”

Meanwhile, other fans got weirdly thirsty for Elba-Knuckles, and we’re not going to share those tweets. You can track them down yourself…

this was the warmup for knuckles pic.twitter.com/H45zunAb5B

Sonic: “Hey Knuckles, we gonna talk about how your family killed my mom?”

Sonic the Hedgehog was one of last year’s few success stories. The family movie was one of 2020s highest-grossing films raking in an impressive $306 million at the worldwide box office.

Sonic 2 zooms into theatres on April 8, 2022, in the meantime you can see Elba in The Suicide Squad which is in cinemas now. 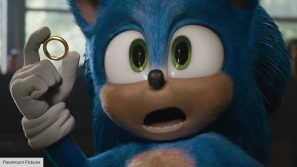 Sonic the Hedgehog 2 release date, cast and everything else we know
Get involved Continue the conversation over on The Digital Fix Forum