A new trailer for horror movie Resident Evil: Welcome to Raccoon City offers some insights into the evil Umbrella Corporation. The film has a US release date of November 24 and will be out in the UK on December 3, exclusively in cinemas.

A statement from Sony Pictures says; “Returning to the origins of the massively popular Resident Evil franchise, fan and filmmaker Johannes Roberts brings the games to life for a whole new generation of fans.”

And the synopsis reads; “In Resident Evil: Welcome to Raccoon City, once the booming home of pharmaceutical giant Umbrella Corporation, Raccoon City is now a dying Midwestern town. The company’s exodus left the city a wasteland…with great evil brewing below the surface. When that evil is unleashed, a group of survivors must work together to uncover the truth behind Umbrella and make it through the night.”

The trailer sees Claire Redfield (Scodelario) explaining that; “The Umbrella Corporation has been experimenting on this town since we were kids. People are getting sick. We have to stop Umbrella.”

The NIGHTMARE (Red Band) trailer depicts many of the horrors that will be unleashed in the film and contains some choice language, so be warned.

The trailer tells us that THIS YEAR, EVIL CAN’T BE CONTAINED. It depicts zombies, as well as failed human experiments, meaning that fans of the games and the series in general should hopefully be happy.

If you want to know what the best horror movies of 2021 so far are – check out our guide. 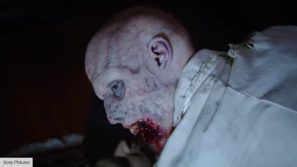