Lucifer star Tom Ellis has given us a sneak peek at season six, and it contains a crossover with one of the best movies of all time. The dark lord appears to have gotten himself a very ’80s set of wheels.

On Instagram, Ellis, shared a picture of himself as the suave Lord of Darkness in a sharp suit, leaning on a DeLorean. “Good things are coming,” he captioned the image. The DeLorean is, of course, the iconic car used in the Back to the Future trilogy of science fiction movies, where a time-machine is built into it. Our man the Dark Lord seems to just have one off the regular DMC DeLoreans, which were in production during the early-’80s.

It’s only a small tease, but enough to get the ball rolling for the next, and final, season of the DC TV series. A panel is due to occur at [email protected] this weekend, July 24, and some fans were hoping we might get a surprise announcement of another season, Unfortunately, Joe Henderson, the showrunner, has put a damper on this speculation by saying that he can confirm “that ain’t happening”.

Started back in 2016, Lucifer is based on Neil Gaiman’s The Sandman comic series, and follows Satan being a sharp-dressed man on Earth. Lucifer Morningstar decides Hell isn’t hot enough, and opens a nightclub in Los Angeles, because he’s just that kind of masochist.

It was meant to end at five seasons, but a surprise sixth was announced last year that’s currently in production. Netflix is likely hoping to clear the runway for its full-on The Sandman series that’s in production.

Hopefully we’ll learn when the new season of Lucifer will premiere on Netflix soon. We have the best horror movies on Netflix if you’re in need of a good scare. 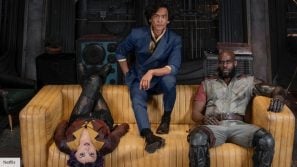