Clint Barton is at the centre of the next big Marvel show for streaming service Disney Plus, and if they aim it just right, Hawkeye could finally show what Earth’s Mightiest Archer is capable of.

After a reality-bending witch, a new Captain America reporting for duty, and a sociopathic Asgardian learning the error of his ways (again), the Marvel Cinematic Universe has carved out a corner of television all of its own. Disney Plus’s upcoming schedule is still jam-packed with shows that we can’t wait to get our hands on, varying from Moon Knight, Secret Invasion, and Ms Marvel.

However, even with all these awesome stories in Marvel Phase 4, Marvel’s secret weapon could be a hero that it’s been dependent on since the beginning. The Avenger in question is Jeremy Renner’s arrow-obsessed Hawkeye, whose impact on the MCU might not be massive but he could be at the forefront of one of its most engaging stories to date. Call us optimistic , but even with thunder gods and green rage monsters, the Marvel archer and his new partner could be the first to provide representation for fans of the MCU that have yet to have had any at all.

Let’s fire off the easy shots first; Hawkeye has matched up to be the star the franchise wanted him to be. From a Loki drone to a last-minute Avenger in their debut team-up, even though he stuck with Cap and crew following the attack on New York (Civil Wars and universe-dooming snaps aside), he was never quite in the same league as some of the rest of the team.

Acting as a father figure to Wanda and a comrade-in-arms to Black Widow, Clint was much more than an ‘arrow guy’ when heroes needed a dose of humanity or a reality check. These characteristics look to be at the core of his solo(ish) TV series if the book Marvel is adapting is any indication.

Straight as an arrow: The best thriller movies

Since Clint was confirmed to get his gig in 2019, passing the bow to new avenging archer Kate Bishop (Hailee Steinfeld), sights were set on Matt Fraction and David Aja’s comic book run as the inspiration for the story. It followed Clint pairing up with Bishop (who had taken the Hawkeye name) as they fought a Russian mob who had it out for Clint and his apartment block. 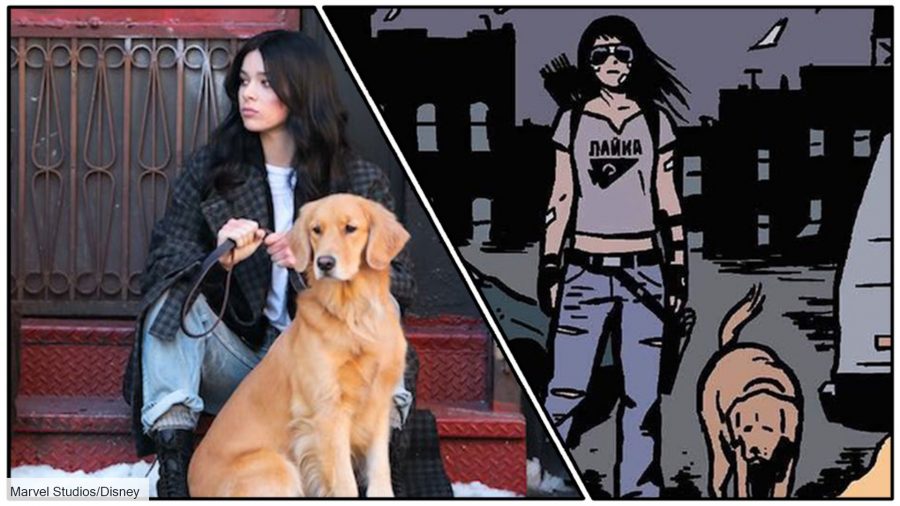 See, Barton isn’t happily married at this point in the comics, but a near-permanently plastered up hero living alone. It was a sterling effort to answer how a man who fires arrows against aliens lived his everyday life, providing a more in-depth look at Hawkeye, which may transfer to the Disney Plus show.

Coated in the archer’s signature colour throughout, this Vimto-tinted tale read like it was nipping at the notepads of Shane Black and Drew Goddard with its buddy action formula stirring between Barton and Bishop in a Lethal Weapon fashion. Most importantly, Fraction’s story was a crucial element that could set Hawkeye apart and above what’s come before in Marvel’s TV roster.

Besides its sharp dialogue and compelling take on Barton, one of Fraction’s groundbreaking choices was making Clint deaf. Hawkeye had lost his hearing before the writer’s involvement, only to regain it after being brought back from the dead (long story). Fraction deemed it a crucial part of the archer’s backstory he was keen to revisit, highlighting a real-life issue. He acknowledged that representing a group within the Marvel audience was key and placed our brave bowman even further apart from the strongest heroes in the Marvel Universe for the right reasons. 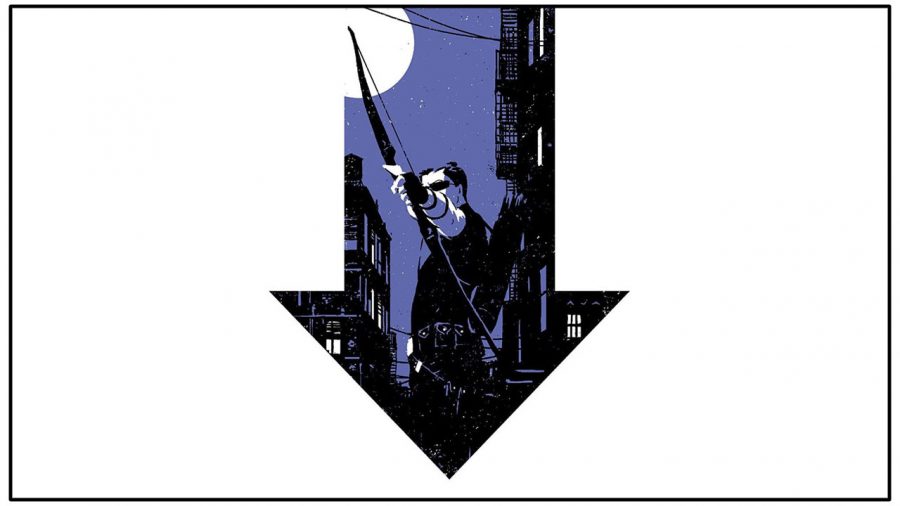 Speaking at HeroesCon in 2019 to the ButWhyTho Podcast, Fraction explained: “Clint’s deafness is his superpower since he is just a regular guy.” It’s beautifully handled in the comic, as after this life-altering event, the story takes a dramatic turn that spoke to specific readers and made Clint’s issues even more relatable, and even more human.

Speech bubbles were filled with jumbled words based on Barton’s lip-reading, or in the case of characters not being in his line of sight, totally void of speech. As the story progressed, pages had frames full of ASL (American Sign Language), once again amplifying the attention to deaf readers speaking directly to them. Transferring that to the screen could make for another diverse way of storytelling that only now we’re starting to see more of.

Using this as reference (and on-set snaps that spied Renner with a hearing aid), there’s a clear intent that the MCU Barton will be following suit. If so, it would mark a level of progression that has yet to be seen in the franchise, altering the cinematic universe, with a universally known impairment that characters and stories would need and should adapt to. 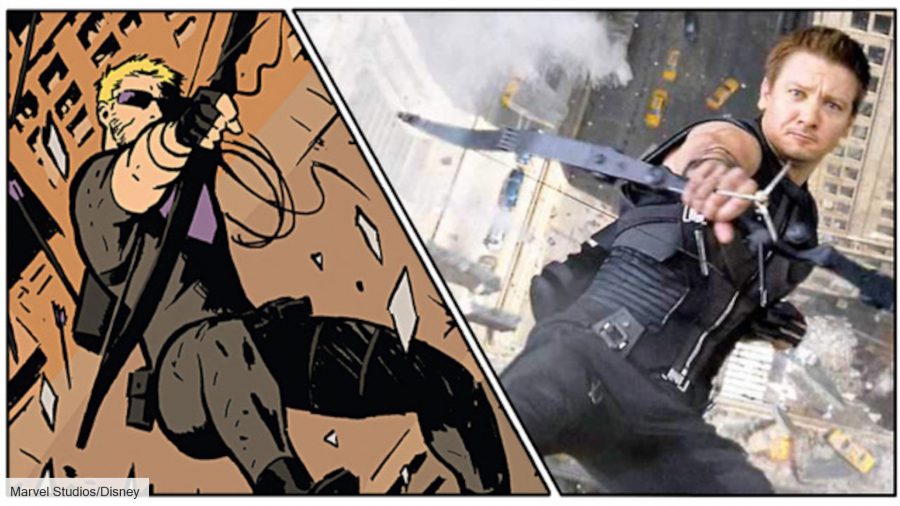 Our MCU favourites could stop to talk to Clint in ASL mid-conversation, or if taking note from Deadpool in the comics, raise their masks to ensure that Clint (and therefore any fans like him) stay included. Barton won’t be the only deaf character to land in the world that’s dominated ours for over a decade, either. It was revealed in December last year that the show will pave the way for indigenous and deaf master of mimicry Echo, who is also set for her own spin-off.

Played by Alaqua Cox, who, like her character, is also deaf, this inclusion and potential new territory for Hawkeye to be heading in demonstrates, as the MCU’s Barton always has, that anyone can be a hero. That being said, besides this new chapter for Barton that could be happening, there’s one extra advantage, especially in Disney’s hands, that this show really can’t miss – and it involves a pizza-loving dog.

Earth’s finest: How to watch Arrowverse in order

If you expected WandaVision and Loki to be where the weird was mostly going to be, well, then you’re barking up the wrong tree. Besides his beautifully whip-smart analysis of Barton’s mortality and kickass chemistry between an old Hawkeye and a new, Fraction’s take on the archer also houses a one-eyed dog named Lucky, who could easily be the star of the show. 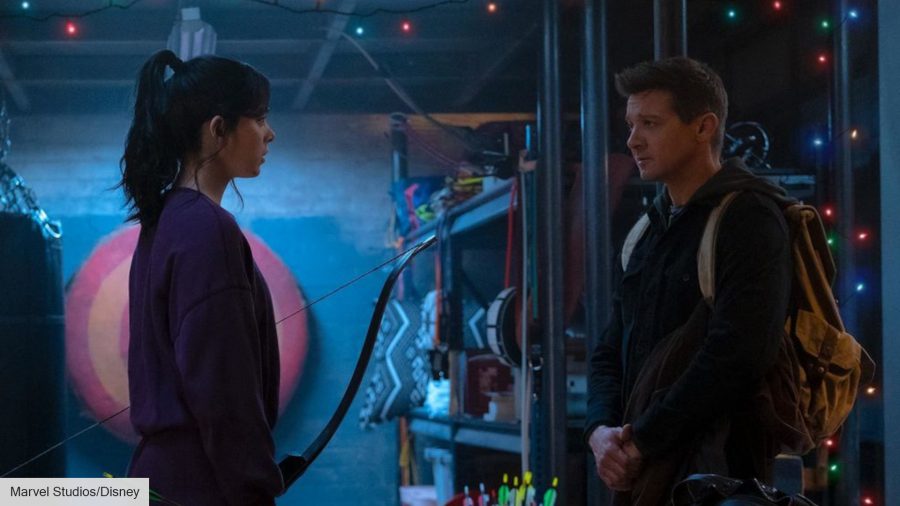 Inspired by his own dog that sadly passed before Fraction got to work on Clint, Lucky is a loveable pooch that our hero takes in, and eventually has his own adventure within the main one. In Hawkeye #11, readers saw the world from Lucky’s perspective as he fought off invaders, made friends based on their scent. It’s thought to be one of Marvel’s most coveted issues for its originality and brilliant method of storytelling, as Lucky wandered the halls of Barton’s apartment block. For Marvel, it’s a new trick, but for an old dog like Disney, it’s something they’ve mastered for decades.

The House of Mouse’s back catalogue of movies has had many cats and dogs taking the lead, so having one steal a potential episode in Hawkeye doesn’t sound (ahem) impawsible. Currently, there’s no confirmation they’ll take such an approach, but we’ve already seen Lucky on-set, so there’s every chance it could.

If it does, it’ll be one of Marvel Studios’ biggest manoeuvres; showing the action unfold from the ground up as another significant part of Barton’s adventure, making it different from the rest (a wild claim for a franchise with a talking tree and raccoon). Add that into Clint having his own issues in a story that plays like Leon and The Nice Guys, and you’ve got a potentially outstanding series focused on Marvel’s most overlooked heroes. Bet you didn’t see that coming.