John Wick 4 has wrapped filming, and now we have a title for the action movie sequel. According to some branded merchandise the crew received, the full title is John Wick 4: Hagakure.

This was revealed thanks to one of the crew, stunt-person
Tsvetolyub Iliev, who shared a set of gifts from leading man Keanu Reeves and director Chad Stahelski. The items pictured include a martial arts uniform and a tote bag, and emblazoned on the front of the bag is John Wick 4 and its adjoining subtitle.

Hagakure is a Japanese word that can mean “In the shadow of leaves” or “Hidden leaves”, and it comes from the text of the same name by Yamamoto Tsunetomo on samurai teachings. Tsunetomo died in 1719, but Hagakure has since become one of the prime era-specific books on the samurai way of life and its principles. Many printed editions can be found online, with an illustrated version of Hagakure: The Manga Edition, released in 2011. In any case, given the Latin roots for Parabellum, the historical context seems to be one of the overarching features of the John Wick mythos.

Hagakure makes sense in a more immediate sense too, because of the cast. Hong Kong martial arts cinema legend Donnie Yen, known for the IP Man thriller movies, is involved, as is Japanese-British popstar Rina Sawayama. The Asian influence is prevalent.

We don’t know a huge amount of the next John Wick film at present. Laurence Fishburne, Ian McShane, and Lance Reddick are all confirmed to return, with Chad Stahelski directing. It might be easier for us to tell who isn’t in the supporting cast, with Clancy Brown, Hiroyuki Sanada, and Bill Skarsgård, among those confirmed to have some part or other.

Now that principal photography on the film is done, we might hear and see more about the next John Wick instalment sooner rather than later. John Wick 4: Hagakure comes to theatres May 27. 2022, but you can have some Keanu Reeves before that with The Matrix: Resurrections, out December 24, 2021. 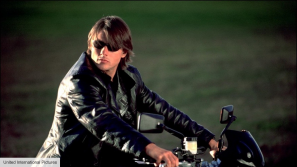