With Halloween just around the corner, Disney is gearing up to bring back the Sanderson sisters and all their child hunting witchy ways. The original 1993 Disney movie, Hocus Pocus, has gone down as a cult classic, and back in 2020, Disney finally gave fans news of the long-awaited sequel they had been dying for. Hocus Pocus 2 is set to release on Disney Plus in 2022. However, it won’t follow the same filming pattern as the original.

Although Disney hasn’t given any updates on the upcoming kids movie’s production or filming status, it has now been revealed that Hocus Pocus 2 won’t be shot in the same location as the original movie. The 90’s flick was set in Massachusetts, and as a result, its production was filmed in Salem. This arguably added to the atmosphere of the Halloween movie, as Salem is the site of the 1600s Witch Trials. While holding a tragic history, Salem has also served as the centre of inspiration for multiple horror movies. Hocus Pocus 2 won’t see the cast and crew returning to Salem. Instead, the upcoming film will be shot in Rhode Island.

According to the Providence Journal, production began building 1600s-era set pieces in Chase Farm Park in Lincoln. The film’s team has also been securing permissions for specific and potentially hazardous scenes, such as controlled burns, from town officials and law enforcement in the area.

It was also reported by the news outlet WJAR that a Rhode Island NBC affiliate said that Hocus Pocus 2 is making use of historic buildings in the area, like the Cranston Street Armory. Furthermore, a recently deleted Facebook post called for New England extras for the movie, pretty much confirming that filming won’t shift to Salem any time soon.

Hocus Pocus 2 director, Anne Fletcher, is no stranger to filming in Rhode Island. Previously she shot her romance movie 27 dresses in the state and is familiar with the area, hinting that she’ll know where best to film as she tries to capture the atmosphere of Salem without being there. We are curious to see how she will bring the spooky vibe for the family movie without Salem’s help.

Hocus Pocus 2 is scheduled to release through the streaming service Disney Plus in 2022. While we wait on the Sanderson sisters to put a brand new spell on us, here is our list of the best musical movies. 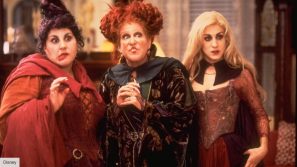