You don’t need to stick nails in your head to become Pinhead, but it’d help if you weren’t claustrophobic. A new video shows some of the transformation of the head Cenobite for the horror movie reboot of Hellraiser, and it’s a little unnerving.

Jame Clayton, who’s playing Pinhead in the new Hellraiser, shared a clip on Instagram of getting a head mold made for the role. The process looks terrifying: her entire head and shoulders are covered in layers that solidify to provide a perfect model from which to design the rest of the look. She’s totally covered bar two small nose holes, and as you can see by the end, is more than a bit relieved for the whole process to be over.

On top of being a cool piece of behind-the-scenes footage, it shows the lengths these filmmakers are going to for this new Hellraiser film. David Bruckner, known for movies like The Night House and The Ritual, is directing, from a script by Ben Collins and Luke Piotrowski, based on a story from David S Goyer.

We don’t know much else at present about the new Hellraiser, other than it’s due out next year. Clayton dated her video to July, which makes sense given that her casting was announced about filming had wrapped.

Hellraiser is due to arrive on streaming service Hulu. Plans for UK distribution remain to be seen – watch this space. Clive Barker, original creator of the Hellraiser mythos, is producing, alongside Goyer, Keith Levine, and Marc Toberoff. Besides Clayton, the only other confirmed cast-member is Odessa A’zion, who’s playing Riley, the female lead.

We’ll let you know more when we can – in the meantime, here’s the best horror movies of 2021 for more chills to keep you occupied. 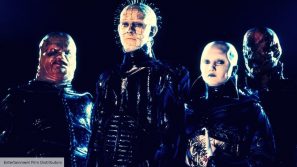