Summoned by those brave, or foolish, enough to solve the Lament Configuration, the Cenobites are angels to some and demons to others, servants of The Leviathan the Lord of Hell. First introduced in Clive Barker’s book The Hellbound Heart, these monsters are probably best known for their appearance in the Hellraiser horror movie franchise.

Over the course of ten movies, countless comic books, and different stories, a number of different Cenobites have been introduced. These theologians of pain share a few common attributes, they all wear black leather, love causing pleasure and pain (there’s no difference to them), and they all love a piercing or two. Despite this, though, there’s a lot of variation between these hell-bound horrors, so we thought it’d be fun to rank them.

To do so, we’ve both been delighted by the pleasures of the first two films and slowly been sucked into hell as the franchise goes on, and we endure the pain of the straight-to-DVD sequels. But to paraphrase another horror series that also goes off the deep end, it’s all for you, dear reader! So enjoy our ranking of all the Cenobites from across the Hellraiser franchise.

What even is this? This looks exactly how teen edgelords would design Pinhead, pushing everything to the extreme to the point it falls off the mountain of fear and into the dreaded valley of goofiness. 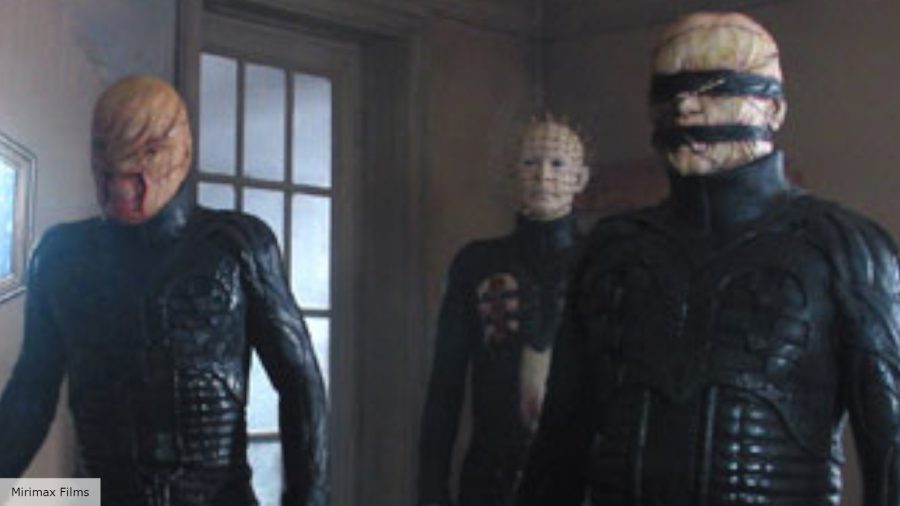 Bound 2? Seriously? Bound 2 is on this list by virtue of being a live-action Cenobite and that’s about it, there are comic book Cenobites I like more than Bound 2 – and that’s saying something.

It was a graveyard smash! Best monster movies 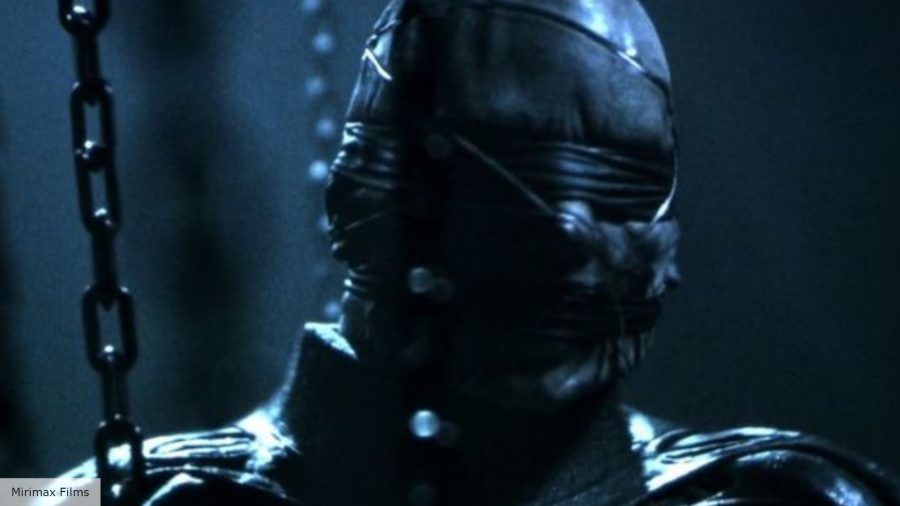 Bound’s saved from the lowest ranking by virtue of being a female Cenobite and also because you have to rank the original higher than its photocopied duplicate. 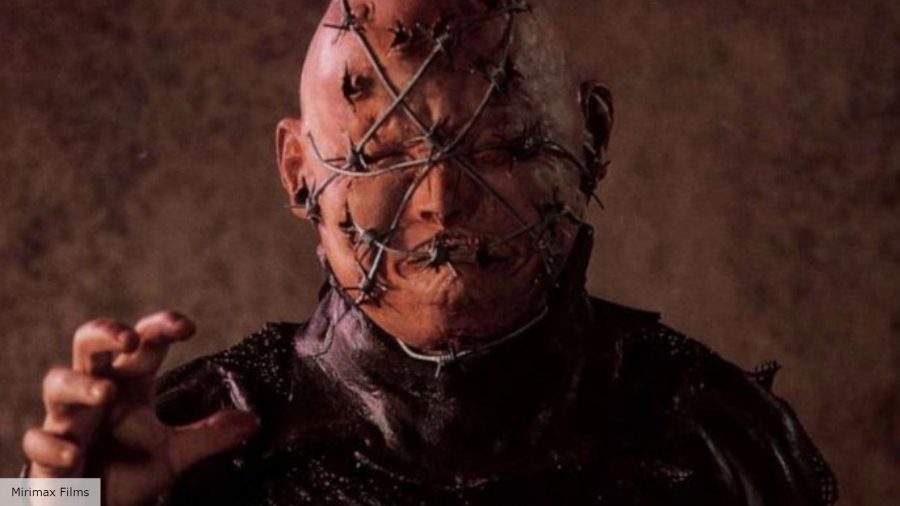 Barbie ranks higher than Bound on this list despite essentially being exactly the same design because of his name.

It honestly took me an embarrassing amount of time to realise that this mangled mess of meat was called Barbie not after the popular children’s toy (Is Barbie still popular?) but because its eyes are wrapped in barbed wire.

I guess if I was a Cenobite I’d be called Pointless because I miss the point a lot and points are spiky… you get the joke. 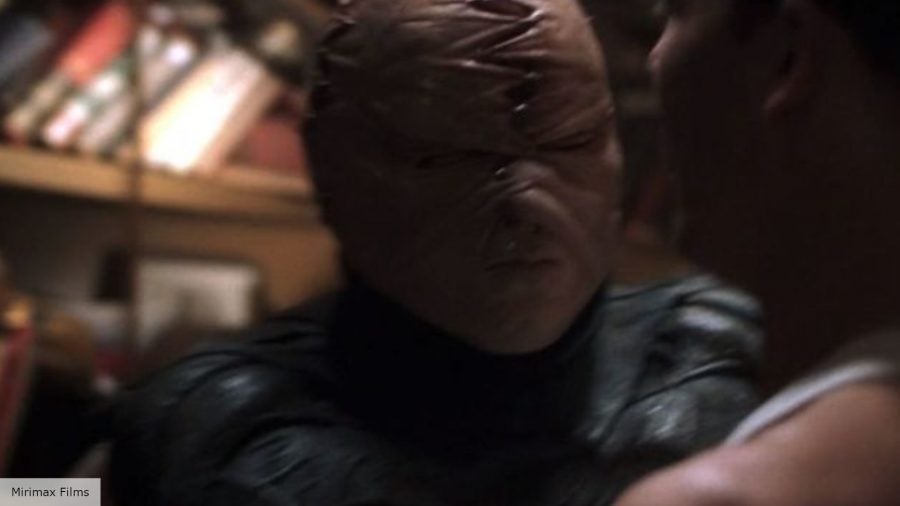 The only Stitch this page recognises is the one who hangs out with Lilo in Hawaii. I still like her more than Bound though… 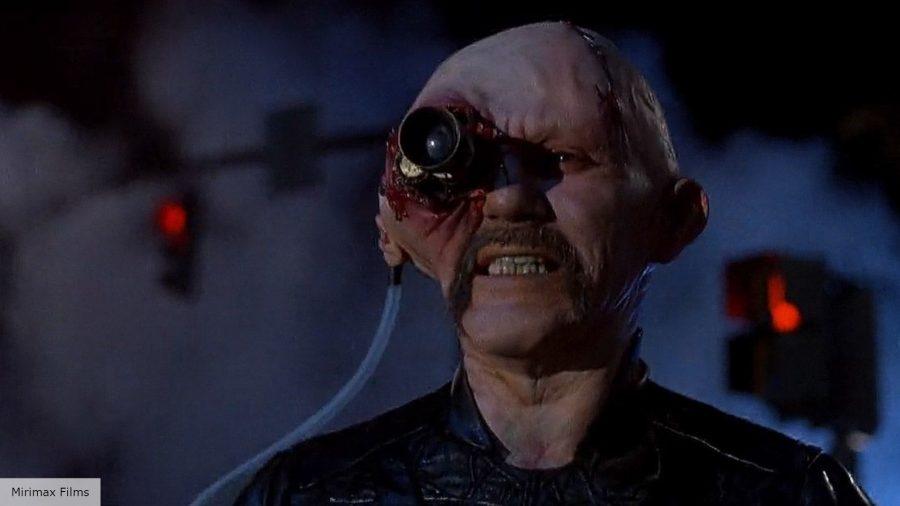 Camerahead is such a forgettable Cenobite that for the longest time I was calling him “Videohead” in this article. I only realised his real name while checking to see if I’d missed any of the bazillion sex pervert monsters that fill this franchise.

Still, he gets points for being weird at least, and he can kill people with his camera which is nice. I also like his moustache. It makes me think of other Cenobites who might be improved by the addition of a moustache. 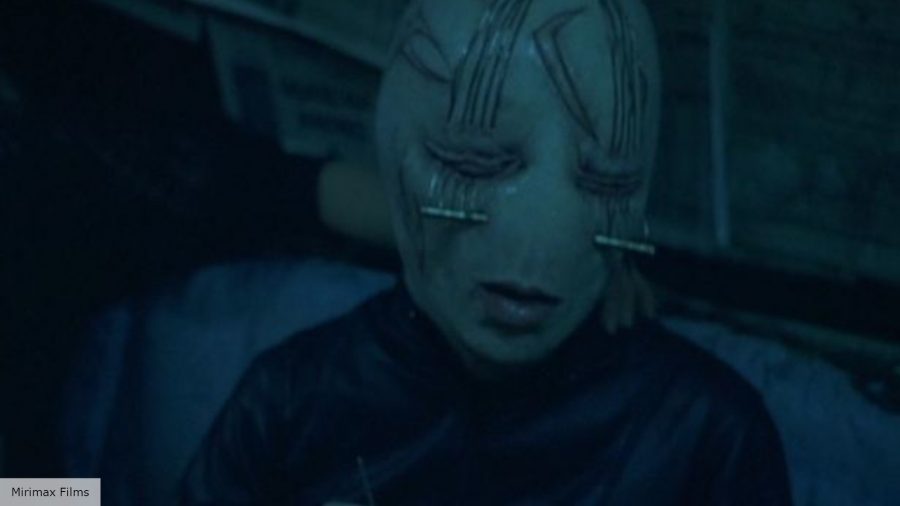 Little Sister has a face like a well-used bar of soap and is basically a worse version of the Wire Twins. What you don’t know who the Wire Twins are? Well, keep reading… 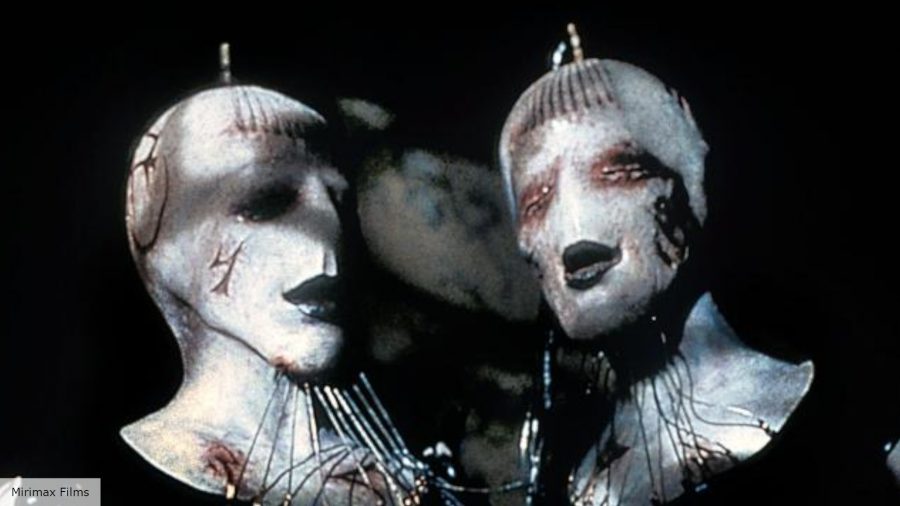 The Wire Twins look like someone wearing a sexy Voldemort costume for Halloween and as such, I cannot take them seriously. Still, they hang out with a Chatterer rip-off which is something. 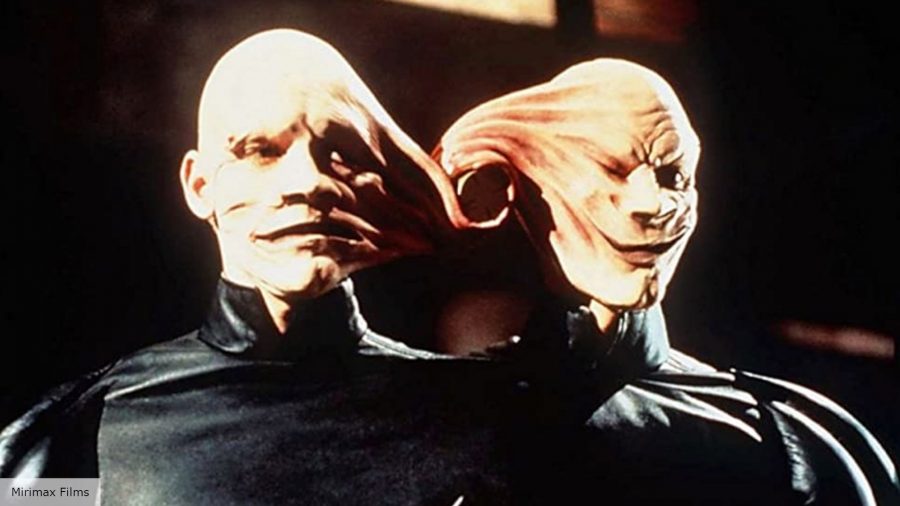 The Conjoined Twins were introduced in Hellraiser: Bloodlines and were originally, and this may come as a shock, twin brothers Mark and Michael Norrington.

I’ve ranked them quite low on this list because, while I like how they remind me of the burned remains MacReady finds in The Thing while exploring the burned Norwegian base, I hate how the little flesh loop that connects them reminds me of Turkey Twizzlers. These were a disgusting British foodstuff. If you don’t know what I’m talking about count yourself lucky… 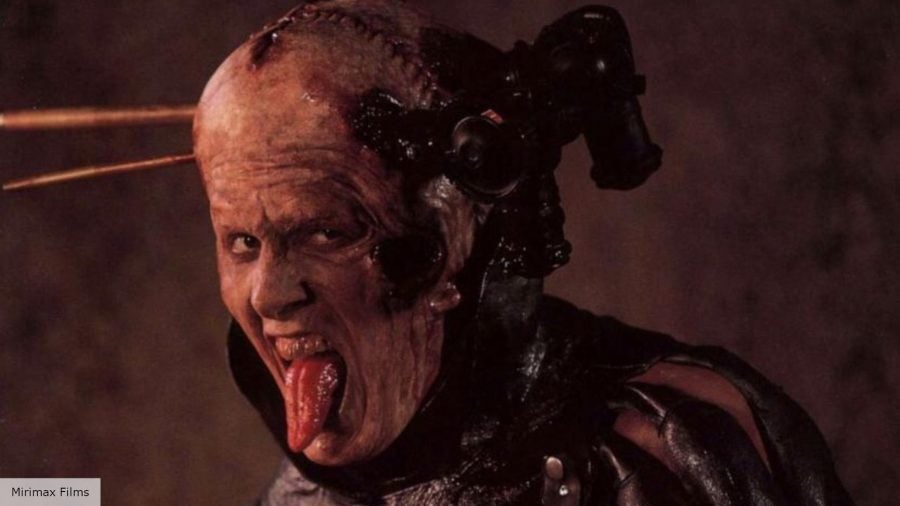 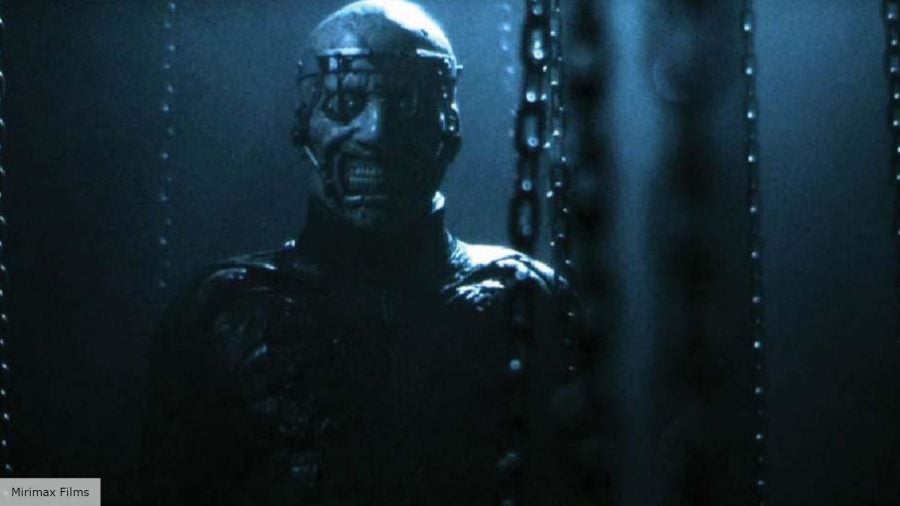 Now we’re talking. Finally, we get to the good Cenobites. The Surgeon looks like the bastard child of Voldo and Karl Ruprecht Kroenen, who then got sent to an over-enthusiastic orthodontist.

The result is a terrifying creature with a permanent sneer. His existence also lends credibility to my fan theory that all dentists became Cenobites, still, he’s basically a worse version of The Doctor which leads me on too… 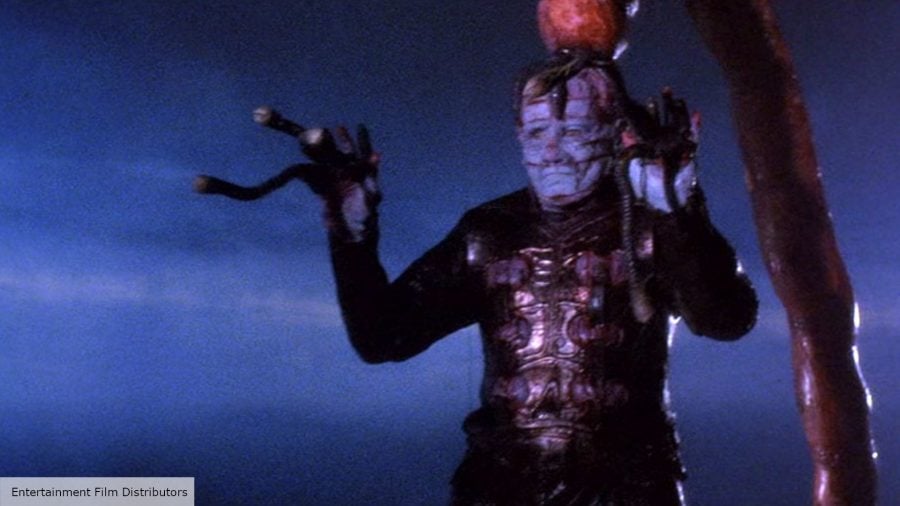 It may be Hellraiser sacrilege to put The Doctor, aka Dr Channard, so low on this list but there’s something about this Cenobite I just don’t like. I think the general idea of seeing a human tortured, flayed, and eventually puréed before they’re poured into the black leather apron of a Cenobite is a cool idea.

Unfortunately, I think general design is a bit bland for my tastes, he’s just a grey guy with medical tools for fingers. I like when The Leviathan latches on to his head with its lamprey like appendage and starts using him as a murderous marionette but that’s about it.

I think though my biggest problem with The Doctor is how he disposes of the original quartet of Cenobites so easily, it feels like swapping some shiny pokemon cards for a bin bag full of chips, it just doesn’t make sense. 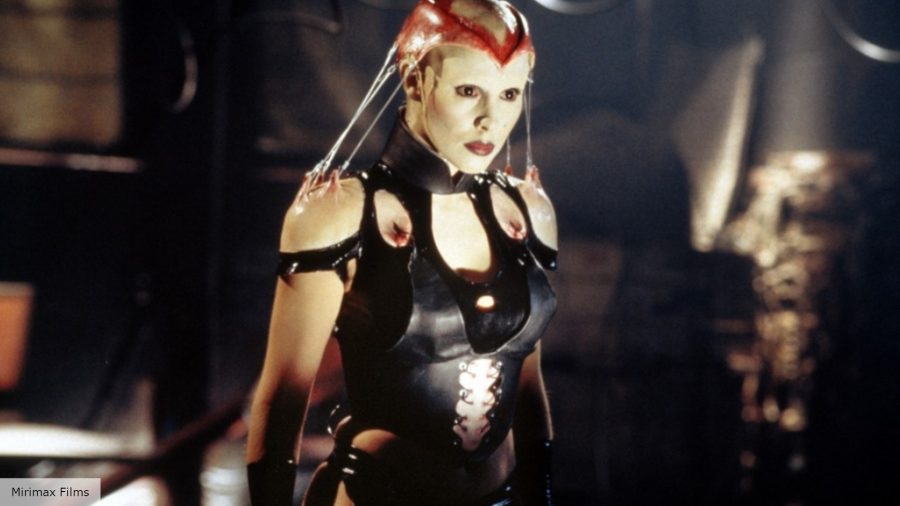 Angelique is an interesting Cenobite. Unlike all the others who are humans transformed by the various tortures of hell into servants of the Leviathan, Angelique is an out and out demon. Well, sort of. She started life as a demon, who possessed the corpse of a woman, who was then turned into a Cenobite by Pinhead.

Angelique’s unique backstory and interesting exposed skull make her one of the more interesting Cenobites to come from beyond the original four movies. Unfortunately, she’s also in Hellraiser 4 which is basically ‘Cenobites in Space’ and I can’t abide it.

CD is the subject of serious discourse in the two Hellraiser group chats I’m in (one wasn’t enough to contain me and the boys on the quest for ultimate pleasure). I know people who genuinely think he’s one of the more interesting Cenobites, and I agree in a kitsch kind of way.

With his goofy mouth, stupid mask, and weird electronic noises, he’s a fun design plus he lives up to his namesake and throws CDs like shuriken. Despite that, I’m not ranking him higher, partly out of spite and partly because goofiness alone does not a Cenobite make. 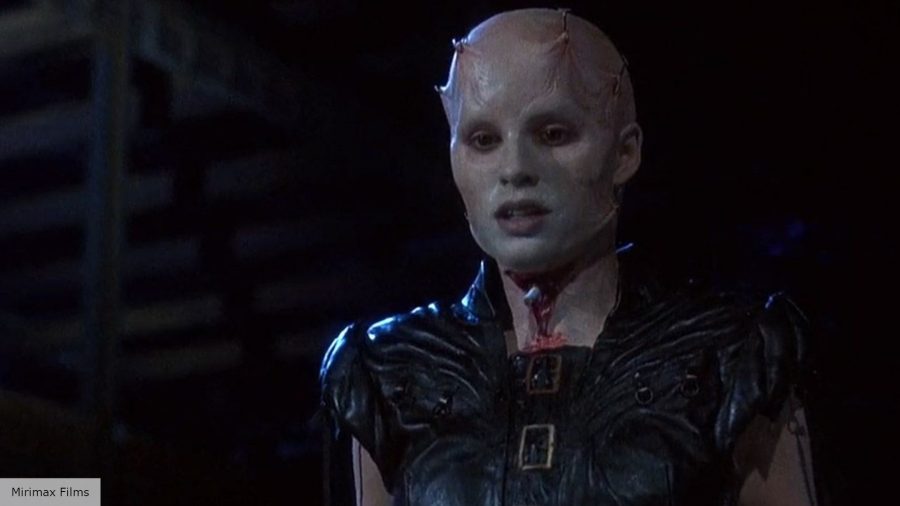 Dreamer is far and away the best Cenobite introduced in Hellraiser III: Hell On Earth. Unlike Pistonhead, CD, Camerahead (or is it Videohead?), and Barbie, she looks like something from the first two films.

It’s a relatively subtle piece of design work and that makes it all the creepier. Also like the Female Cenobite, she’s got her throat torn open, but for some reason, she’s got a cigarette in hers. Each to their own I guess but remember smoking kills and probably more people than the Cenobites.

A superb piece of design the Female Cenobite has the goriest design of the original quartet of Hell Priests. The most notable part of her design is of course that he throat has been slashed open, exposing the meat beneath and then wire has been sewn through the wound preventing it from closing.

Creepy as this is it’s not my favourite thing about the way she looks, I really like her hair, or what’s left of her hair at least. She’s got these wispy thin strands that hint she was once a normal woman and not a callous agent of The Leviathan. I’d have ranked her higher if it wasn’t for one thing, she doesn’t really talk, which is a shame because in the book she’s the leader of this particular Gash instead of Pinhead. 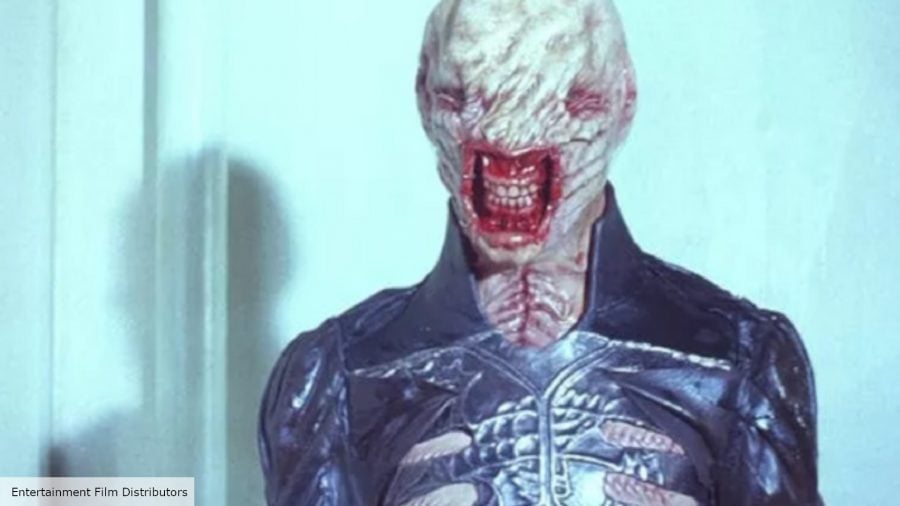 Chatterer and every variation of him

Of the original four Cenobites introduced in Hellraiser, Chatterer clearly left the biggest impression on viewers outside of Pinhead himself. He’s horrifically scarred, missing his eyes, and has his mouth wired open. All he does in the original movie, as his name suggests is chatter his exposed teeth and serve as Pinhead’s mute muscle, but he’s easily the most prolific Cenobite aide from Pinhead.

I totally understand why. He’s one freaky looking Cenobite, and I’d probably have ranked him higher if his design hadn’t been ripped off in almost every other bloody Hellraiser movie. Seriously, we’ve had Chetter I-III, a female Chatterer, a dog Chatterer, and even half a Chatterer. We get it he’s cool looking, go make something else! 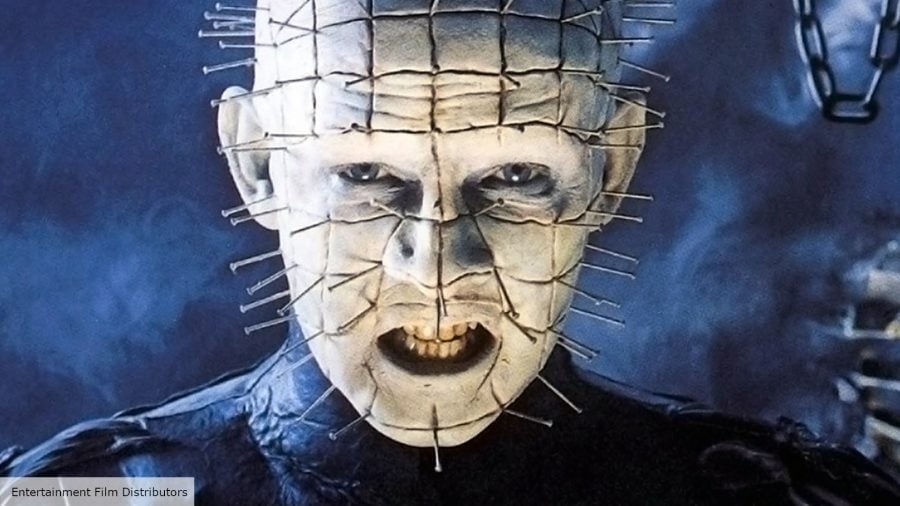 What can you say about this icon that’s not been said before? I remember the first time I ever saw Pinhead, he was on the cover of a VHS box in Blockbuster. Being far too young to rent Hellraiser, I didn’t pick up Clive Barker’s magnum opus (if memory serves I opted for Dumb and Dumber) but the cover alone left an impression on me. With his head full of pins, lattice of facial scars, and cold dark eyes, I’ve always thought he was impeccably designed, especially when you consider he was done on a budget of about 12 pennies (I’m rounding up).

Beyond his incredible appearance, The Dark Prince of Pain has a huge advantage over his callously cruel colleagues, he can talk. While Cenobites all share the same goal of dragging humans to the Leviathan it’s Pinhead who serves as his ambassador and proxy, essentially giving him a motive the mute cenobites lack.

Back when I first saw that Hellraiser VHS I presumed Pinhead was a slasher villain in the vein of Jason or Freddy Kreuger, it was only when I watched the film that I realised how wrong I was. He’s neither angel nor demon, he’s simply Pinhead, an envoy of experience who functions less as the antagonist and more as the McGuffin that Frank and Kirtsy desperately want to avoid. Unfortunately, the nuance in Pinhead’s character was lost over the years and later movies make him more of a bloodthirsty figure, dumbing down the initial concept which is why I can’t put him in the number one spot. 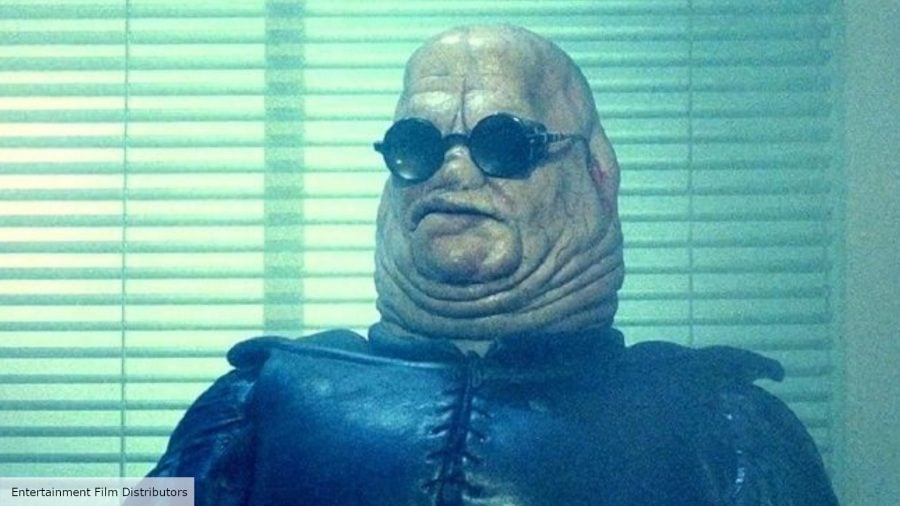 Oh, my beautiful baby boy. I adore the design of Butterball, it’s just so odd. Of the original four Cenobites, he’s arguably the least gruesome but easily the oddest. With his sallow greasy skin, folds of fat, and a tiny pair of sunglasses, he could almost pass for a human. Almost being the keyword, there’s something indefinably off about him, he looks like the meat sweats made flesh.

Perhaps the reason I like him so much is how represents a different type of excess from his demonic brothers and sisters their all occult sex and impossible viscera, Butterball looks like he spent his time in Hell at the buffet eating unholy sausage rolls, which is exactly where I’d be if I ever solved the Lament Configuration.

He also has one advantage over his boss, when he dies in Hellbound: Hellraiser 2, he stays dead not suffering the motive decay and overexposure of Pinhead and Chatterer. Rest in peace my gluttonous friend, you were too greasy for this cruel world. 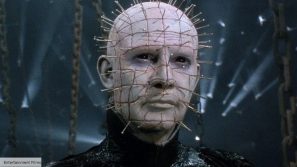 Hellraiser reboot casts Jamie Clayton as Pinhead, Clive Barker joins as producer
Get involved Continue the conversation over on The Digital Fix Forum