The Fast and the Furious is one of the biggest and most ambitious action movie franchises ever. So far, they’ve literally wrestled nuclear bombs, stolen every car imaginable, and even been to space. There’s one place that the movies have never been, though. They’ve never gone to the darker side of the tracks and embraced an R-rating. Now one of the series’s stars wants them to do just that.

Sung Kang, who plays everyone’s favourite character Han, told Screenrant he’d like at least one of the last films to be R-rated. “I’d like to see the Fast films, at least one of them, go rated R,” Kang said. “Go super dark, to see where that could go. I don’t know which character that’s going to be, somebody has to go dark, really dark. And maybe it would be cool to see.”

While watching a more violent Fast film would be fun, we doubt it’ll ever happen in the mainline series. R-rated movies just don’t have the same financial potential as a PG-13 film by their very nature, due to their more limited audience. And while we wish we could tell you that Vin and the family were making the Fast films for the art, movie-making is a business at the end of the day.

More than that, The Fast and Furious has a definitive tone at this point. They’re fun adventure movies about people doing silly things with cars. Sure, people get threatened, and violent things happen, but it’s all very family-friendly (no pun intended), and they’re definitely not ultra-violent splatter movies.

It’s far more likely that if The Fast franchise went down that particular road, they’d do it through one of their upcoming solo spin-off movies. We know thanks to Vin Diesel that Charlize Theron’s villainous Cipher is getting her own solo movie. Maybe it’d be apt to make the series’s big villain the first R-rated movie?

The main Fast and Furious franchise, which seemed like it’d never end, will finally conclude soon with two final films. Director Justin Lin recently told Collider that splitting the last chapter of the franchise made sense to him.

The idea of the last chapter being two films is correct,” Lin said. “I have to say. I’m so glad – because I think when I first entered this franchise, a sequel was not a given. You had to earn it, you know? And so to be sitting here talking to you and go, ‘Oh yeah, there’s gonna be two more movies!’ I’m like, ‘Wow.’ It means a lot. So, every day when I wake up, I’m trying to reconfigure and make sure hopefully whatever we’re talking about process-wise is gonna yield the best result. But I think having one chapter in two movies is correct. That’s where I sit today.” 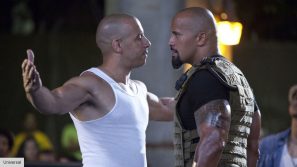