Known as one of the best anime series of all time, Cowboy Bebop has had a huge influence on pop culture, more so than John Cho knew before he was cast in Netflix’s upcoming live-action adaptation. In an interview with Vulture, the actor, who is set to lead the show as space bounty hunter Spike Spiegel, revealed that he “didn’t realise what a big deal it was” before signing onto the project.

In 2018, the streaming service Netflix announced that it would be making a live-action adaptation of the hit late ’90s space anime. The sci-fi series is written by Christopher Yost and developed by Andre Nemec. Acclaimed composer Yoko Kanno is working on the soundtrack, and Cowboy Bebop’s original director Shinichirō Watanabe is also on board, serving as the live-action’s creative consultant. Recently fans were also given a first look at Cho in costume as Spike, and let’s just say all the intergalactic anime hype is real.

However, Cho has revealed that he didn’t truly understand how influential Cowboy Bebop was until recently. The actor shared that he wasn’t familiar with the critically acclaimed anime and was only introduced to the OG TV series after reading Netflix’s impressive script. After watching it, he dubbed the ‘90s series one of the “most unique” pieces of entertainment he’s seen.

“I didn’t know it. The first thing I read and fell in love with was our episode-one script, which I thought was really brilliant, and I thought, what the hell is this? And then I investigated the anime and just thought this was the most unique piece of entertainment I had seen in a long time: the combination of genres, characters, the music,” explained Cho. “I called Aneesh Chagatny, who directed Searching to talk about it. ‘Are you aware of a show called Cowboy Bebop? I’ve got this offer to do an adaptation of this anime.’ I remember him telling me: ‘You have to do it.’ I didn’t realise what a big deal it was.”

Of course, not every anime fan is enthused by the upcoming live-action adaptation of Cowboy Bebop. Netflix doesn’t have the best track record when it comes to live-action anime adaptations – with many anime enthusiasts still trying to forget the streaming service’s 2017 adaptation of Death Note. Still, with the talented cast and seasoned crew, we’re hopeful that the new show will be a success.

Cowboy Bebop is set to premiere on Netflix on November 19. In the meantime, why not check out our list of the best anime movies. 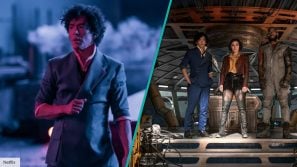