Unlike the final season of Breaking Bad, it looks like Better Call Saul season 6 will be released in two parts. In an interview with Variety – discussing her comedy movie Cooper’s Bar – star Rhea Seehorn shared that the final chapter of the hit TV series has been split in half.

Besides revealing that the upcoming season will be a two-parter, Seehorn kept plot details about the next instalment of Better Call Saul under wraps. The actor offered no comments on the shooting schedule or if her character Kim Wexler is still alive in the new season. Since Better Call Saul is a prequel spin-off series to Breaking Bad, a show where her character doesn’t appear, many fans are wondering about her future fate. “Whether I’m in scripts or not, I get to read them, and I can tell you that this season is insane,” Seehorn said. “It’s going to blow people’s minds. I can’t wait for it to come out.”

Better Call Saul is currently filming again, after having to temporarily halt production earlier in 2021 due to Bob Odenkirk suffering from a health scare. However, according to Odenkirk’s co-star Seehorn, the actor has recovered and is now “doing amazing”. Odenkirk plays the titular crooked lawyer in the show, as the series follows his journey to become the charismatic con-man we all met in Breaking Bad.

Season 6 is thought to consist of 13 episodes instead of the standard ten, and Thomas Schnauz, one of the show’s executive producers, has said that the finale will pack more of a punch than previous entries in the Netflix TV series.

In an interview with Den of Geek, Schnauz explained: “There will be more physical and emotional violence in season 6, but I can’t swear that it’s any more than we had before. We’re coming to an end, so whatever happens, will probably hit harder.”

The first part of Better Call Saul season 6 is expected to release on the streaming service Netflix in early 2022 for UK viewers, and on AMC in the US. 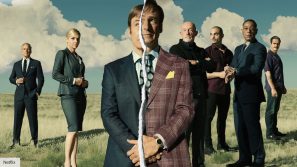