You may have heard that Y: The Last Man, the sci-fi series based on the comic of the same name, has been cancelled. Well, the filmmakers behind it are looking for a new home, and streaming service HBO Max is reportedly a possibility.

The Hollywood Reporter has spoken to a number of people involved in the TV series, and according to the publication, HBO Max is “likely the target home for a potential second season”. This is down to convenience for the IP: WarnerMedia, parent company of the platform, also owns DC Comics, whose label Vertigo printed Y: The Last Man. Warners has attempted two science fiction movies based on the property, but neither worked out, leaving creators Brian K Vaughan and Pia Guerra with the rights in 2014.

They sold them to FX, eventually leading to the series this year. Eliza Clark is showrunner, with Ben Schnetzer as Yorick, the titular last man, after a bio-weapon seems to kill every other male member of the human race. After all that time in and out of development, it was announced that FX had chosen not to renew for a new season towards the end of the first.

THR states the reason for the cancellation is tied to expiring cast contracts, because it took so long to get to people’s screens. Eternals star Barry Koeghan was cast as the lead in 2019, with Michael Green and Aida Croal on board to showrun, but they parted ways due to the creative differences.

My statement on Y: THE LAST MAN and Season 2. pic.twitter.com/rFtb6pXu5i

Available on FX on Hulu in the US, Disney Plus handled distribution in the UK. In a message to her followers on Twitter, Clark said the crew are “dedicated to finding Y its next home.” If a second season does happen through HBO Max, it may lead to complications with British distribution, since Disney and Warners are corporate rivals.

You can catch Y: The Last Man weekly on Wednesdays through November 10. 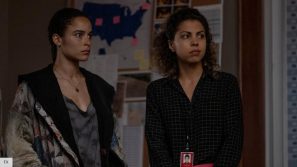 How to watch the next episode of Y: The Last Man – stream the new series on Disney Plus
Get involved Continue the conversation over on The Digital Fix Forum