Brooklyn Nine-Nine’s Stephanie Beatriz has joined the cast of videogame adaptation Twisted Metal. The Peacock TV series stars Anthony Mackie and the showrunner is Cobra Kai‘s Michael Jonathan Smith. TV shows based on videogames are currently all the rage, with Paramount Plus’ Halo, and the upcoming Amazon Prime’s Fallout, and HBO’s The Last of Us.

Beatriz is set to play Quiet – a feisty car thief who acts on her instincts. Coming from a community that oppressed her into silence, Quiet’s wish is to find a place in this dark, chaotic world. But when she becomes clouded by her need for revenge, Quiet forms an unlikely, antagonistic bond with John Doe (Mackie).

Twisted Metal will be a half-hour action-comedy, and is based on a original idea by Deadpool and Zombieland writers Rhett Reese and Paul Wernick. Mackie’s character is described as “a motor-mouthed outsider offered a chance at a better life, but only if he can successfully deliver a mysterious package across a post-apocalyptic wasteland.”

“With the help of a trigger-happy car thief [Quiet played by Beatriz], he’ll face savage marauders driving vehicles of destruction and other dangers of the open road, including a deranged clown who drives an all too familiar ice cream truck.” Kitao Sakurai will direct multiple episodes.

Beatriz has recently appeared in two musical movies with songs by Lin-Manuel Miranda – Disney’s Encanto and In the Heights. She is best known for playing Rosa Diaz in long-running comedy series Brooklyn Nine-Nine.

While we wait for more updates on Twisted Metal, check out our guide to the best action movies. 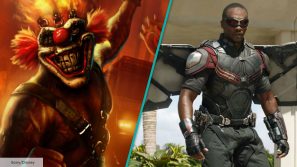